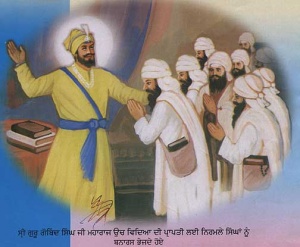 Nirmala(s) or Nirmal Akhada is a ascetic order, sect of celibates associated to the time of Guru Gobind Singh Ji, the tenth Guru of the Sikhs, that commanded particular strength in the 19th century. Nirmalas are the old order of Sikhs intellectuals. The Nirmalasa, like the Udasis, commanded considerable influence under the Sikh rulers of the Punjab, but unlike them they have been able to preserve at least a measure of that earlier respect.

Guru Gobind Singh Ji asked his court Pandit Ragunath to teach his Sikhs Sanskrit, but the pandit refused saying that Sanskrit was the sacred Hindu language that by tradition was only taught to the higher castes. People of the lowest caste, especially the so called untouchables were forbidden from ever reading the Vedas, in fact they were not allowed to enter Hindu temples, as they might hear the holy language of the Devtas. The Sikh Gurus however, saw all men as being equal. Since there were many Sikhs who had been born into the low castes, Pandit Ragunath refused to teach them.

So Guru Gobind Singh sent 5 Sikhs in the guise of Sadhus to Banares. There, they learned all manner of ancient Indian Sanskrit knowledge. Guru Gobind Singh gave them a duty to educate the illiterate Indian populace and promote the philosophy of oneness of Nirankar God and all mankind, amongst Hindu scholars regardless of caste or creed. These Sikhs are said to have worked diligently for several years and returned to Anandpur Sahib as accomplished scholars of classical Indian theology and philosophy. In view of their piety and their sophisticated manner, it is believed that they and their students came to be known as 'Nirmalas' the masters of Sanskrit who were the first intellectuals and scholars of Sikhism.

However this is thought to be highly improbable since there is scarcely any mention of them in the Sikh literature before the 19th century.

After the evacuation of Anandpur Sahib in 1705, it is believed that the Sikh preachers went to different places outside the Panjab, particularly to Haridvĝr, Allĝhĝbĝd and Vĝrĝṅasī where they established centres of learning that exist to this day—Kankhal, near Haridvĝr, Pakkī Saṅgat at Allĝhĝbĝd, and Chetan Maṭh and Chhoṭī Saṅgat at Vĝrĝṇasī. These Sikhs, who became known as "Nirmalas", became influenced by the Brĝhmanical (Hindu) teachings and worship as a consequence of them spending a lot of time and company amongst the Hindu Brĝhmans at Hindu educational centres across India. When, during the second half of the 18th century, the Sikhs established their sway over the Panjab, some of the Nirmala saints came back here and founded at different places centres which were liberally endowed by Sikh chiefs.

It was customary for Nirmala scholars to attend, along with their disciples, religious fairs at prominent pilgrimage centres such as Haridvĝr, Allĝhĝbĝd and Gayĝ, where they, like other sĝdhūs, took out shĝhīs or processions and held philosophical debates with scholars of other religious denominations as a part of their preaching activity. Sometimes these scholastic exercises led to bitter rivalry and even physical confrontation. During the Haridvĝr Kumbh in 1855, a general meeting of the Nirmalas held in their principal ḝerĝ at Kankhal took the first concrete step towards setting up a central body by electing Mehtab Singh of Rishīkesh, reputed scholar of the sect, as their Srī Mahant or principal priest. Mehtab Singh attracted attention of the rulers of Paṭiĝlĝ, Nabhĝ and Jīnd with whose help a pañchĝitī akhĝṛĝ named Dharam Dhujĝ was established at Paṭiĝlĝ in 1861. Its formal inauguration took place on 7 August 1862. The headquarters of the sect, however, remained at Kankhal. The sect comprises several sampradĝyas or sub-sects each with its own ḝerĝ and its own following. 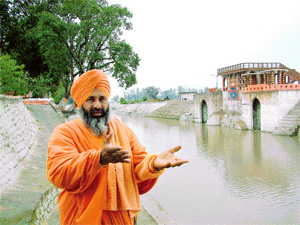 Nirmala teachings incorporated Sikh teachings and doctrines within a largely Hindu/Vedantic framework. Nirmala Study any kind of spiritual knowledge book like Vedas, Puranas, katebs. Like the Udasis they were celibates, and did not believe in holding private funds. The Nirmalas, with the Udasis, form part of the Sanatan Sikh world-view and share many of its beliefs; along with belief in yogic/meditative and scriptural recitation and study. In addition to the Adi Granth, they rely on the Vedas, Shastras, Puranas and Epic literature. It is not surprising therefore that their Sanatan position does pitch them against the so-called Tat Khalsa which some sikhs classify as fanatic version of Sikhism.

The Nirmalas believe in the Ten Sikh Gurus and Guru Granth Sahib Ji. However, due to being influenced by Brahmanical ideology and teaching over years of mixing with Brahmans, the majority of present-day "Nirmalas" do not consider it compulsory nor common among them to receive Amrit i.e. Khaṇḝe dī Pĝhul. Any individual that does not believe in the importance of taking Amrit or in wearing the 5 K's cannot be considered as a Sikh in accordance to the Sikh Rehat Maryada.

Nirmala Scholars easily integrated with the scholars of other religions and philosophies. Nirmalas see themselves as true Sanatan 'Sam Vadi' (egalitarians) as opposed to 'Katar Vadi' (religious fanatics).

At first Nirmalas wore only white garments but later adopted the ochre robes worn by Hindu ascetics, which is now a distinguishing mark of the sect, and shared some other practices, such as birth and death rites, with Hindus. They generally practise celibacy and are devoted to scriptural and philosophical study, but by tradition they are inclined towards classical Hindu Vedic philosophy.

They wore saffron robes (symbolising saintliness and renunciation), and all were Keshdharis (Uncut hair). They established sacred shrines in northern India to preach their version of Gurbani. In the early days of their development, they did not generally settle at one place and continued to move from place to place preaching their philosophy.

The number of establishments expanded rapidly from the late 18th century to the mid 19th century. In the 1891 census 2,828 Hindus and 1,952 Sikhs returned themselves as 'Nirmalas'.(Census of India, 1891, Vol.XX, The Punjab and its Feudatories, by E.D. Maclagan, Part II and III, Calcutta, 1892, pp.826-9 and pp.572-3.) However, there are no official, contemporary numbers, (see also the note at the end of the Explanatory Introduction).

The Nirmalas have been particularly focused in the Malwa region in the 19th century. This was due to state patronage of the Sikh Rulers of Patiala, Jind and Nabha. However their principle centre, other than Patiala, is at Hardwar, though they do have sizeable centres at Amritsar, Prayag, Ujjain, Triambak and Kurukshetra.

8. Nirmal Swami Ji - Japji Sahib Sateek and many others.

Today they form a well respected and highly disciplined organisation with many establishments. As a legitimate part of Sikh History they are accepted as a part of the Sikh Panth, more so than the Udasis. However, any individual or group that does not believe in Khaṇḝe di Pahul, maintaining Kesh, wearing the 5 Kakkaars blessed by Guru Gobind Singh Ji, and believe in the superiority of Sri Guru Granth Sahib Ji. 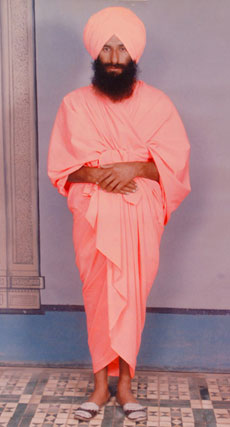 Faridkhot Tika the earliest full scale exegesis or annotated version of the Guru Granth Sahib, was prepared under the patronage of the princely rulers of the state of Faridkot. Hence its popular name Faridkot Vala Tika or, for short, FaridkotTika. Its full title is Adi Sn Guru Granth Sahib ji Satik. Satik literally means with tika, annotation or commentary. The Guru Granth Sahib is an anthology of spiritual poetry of six of the Gurus and a number of medieval saints as well as of some of the followers contemporary with the first five Gurus.

The language used is, by and large, Punjabi or Hindi, not difficult to understand.Yet, because of its poetic form and philosophical content and the linguistic peculiarities bequeathed it by a long range of time and space it spanned, the Scriptural text transmitted to the laity required to be annotated and explained. In consequence arose a whole body of exegetical literature;also several schools of interpretation. The starting point is that corpus itself.

Successive Gurus clarified, elaborated and expounded in their own verse the meaning of the compositions they had inherited. The Janam Sakhis contain these interpretations clothed in much hagiographical detail.This is especially so in the case of writers attempting to provide a setting and background to the hymns they are expounding. One prominent example is the pothi by Baba Miharban.

The writings of Bhai Gurdas (d. 1636) are placed by some in the same category. During the eighteenth century and up into the early part of the nineteenth, the task of interpreting and preaching the Holy Writ primarily rested with the Udasi and Nirmala schoolmen. In the worst days of persecution they were left unmolested. They remained in control of Sikh shrines and institutions; also during the time when the Sikhs had established their authority in the Punjab.

All instruction was carried out orally. The only writings of this period were the Rahitnamas which were, strictly speaking, rules of conduct rather than works of exegesis. The first Udasi exegete of this period who left a written record of his scriptural studies was Anandghana, who completed his tika of Japu in 1795, followed by exegeses of several other banis. Anandghana was the first to separate historical account from interpretative comment.

His interpretations are saturated with Upanisadic lore and are densely Vedantic rather than Sikh, and are apparently a conscious reincubation of Hindu ideology in Sikh thinking.Nirmala scholars generally echoed the Udasi trend of interpreting Sikh scriptural texts in the inflated style prescribed by Hindu commentators on Upanisadic and Vedic texts. Bhai Santokh Singh (1788-1843), the most prominent among the Nirmalas, did write his Garabganjani Tika (Tika to humble the garab, i.e. pride, of Anandghana) in criticism of Anandghana`s interpretations in his Japu Tika, but he too was writing from within the Hindu framework and represented a deep Brahmanical influence. Besides tikas, annotation of scriptural writings continued to flourish throughout the nineteenth century in the form of Praydi (glossaries) and Kos (dictionaries), two prominent illustrations being Granth Guru Girdrath Kos (1895) and Praydi Adi Sri Guru Granth Sahib Ji De (1898).

A new phase of exegetical writing began with the advent of Western learning.It was, in fact, a Westerner scholar, Ernest Trumpp who first took up an end to end English translation of the entire Guru Granth Sahib. But Trumpp`s scorn for traditional interpretations of the faith and his overt antipathy towards it earned him the reproach of the entire Sikh people. Following the publication of Trumpp`s work in 1877, unfinished though it remained.

Raja Bikram Singh, ruler of Faridkot (1842-98) and patron of the Amritsar Khalsa Diwan, commissioned a full scale commentary in Punjabi on Guru Granth Sahib. The first draft prepared by Giani Badan Singh of Sekhvari was ready by 1883.It was then revised by a synod of Sikh scholars representing a wide variety of schools of thought current among the Sikhs, with Mahant Sumer Singh of Patna Sahib as chairman. Other members of the committee were Giani Harbhajan Singh of Amritsar, Sant Singh of Kapurthala state, Jhanda Singh of Gurdwara Nanakiana Sahib, near Sarigrur, Rai Singh of Jarigi Rana, Dhian Singh of Sekhvari, Pandit Hamir Singh Sariskriti, Pandit Balak Ram Udasi Sariskriti and Baba Bakhtavar Singh Giani.

The revision was completed during the time of Raja Bikram Singh, but he did not live long enough to see publication of the work he had sponsored. The printing started during the reign of his successor, Raja Balbir Singh (1869-1906).Three volumes came out during his time and the fourth and final one during the reign of his successor, Maharaja Brijindar Singh (1896-1918). By this time the first edition had already run out.

A large number of the sets had been presented free of cost to gurdwaras and to scholars. The rest were sold at a nominal price. Meanwhile, suggestions for further revisions and for the use of standard Punjabi instead of Braj in the exegesis had been pouring in from various Singh Sabhas and Khalsa Diwans. The Maharaja ordered, in August 1918, the formation of a revision committee and, pending the revision, ordered the publication of a second edition to meet the immediate demand.