From SikhiWiki
(Redirected from Bandai Sikhs)
Jump to navigationJump to search

Bandai Sikhs or Bandai Khalsa, is the name given to the followers of Banda Singh Bahadur (1670 - 1716) that regarded the great military leader Banda Singh, as the Eleventh Nanak, who followed Guru Gobind Singh in an unbroken line of spiritual succession. Their sect originated around 1712, but the majority of Sikhs opposed their view; ultimately they were expelled from the Panth by the Tatt Khalsa in 1721. A small number of Bandai Sikhs still exist, they revere the Guru Granth Sahib as their Scripture and most of them undergo the Khalsa initiatory rites, but they still hold to their belief that Banda Singh Bahadur was the eleventh Guru. The common Sikh belief is that the line of human Sikh Gurus ended with Guru Gobind Singh, the Tenth Master. 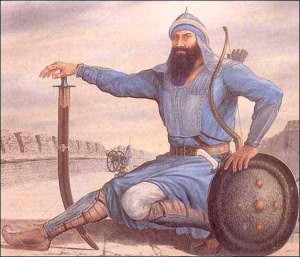 They share the common Sikh belief that Banda Singh Bahadur was sent to punjab by Guru Gobind Singh, to punish Wazir Khan and to preach Gurmat. He started establishing Raaj after shooking his hands with the Hill Rulers. He married with daughter of Hill Ruler o Chamba, with Ram Dei. He had power in hand and by misguiding of Hill Rulers and relatives, he aimed on establishing Raaj. Guru Gobind Singh was with government during his last years of life and he also helped Bahadur Shah. He send Banda Singh with consent of Government, as government was already against Wazir Khan as he did various activities against government so centre allowed Khalsa to go sirhind and punish the convicts.

Later on, Banda Singh even began to hold a Darbar, acting like a Guru in later stages. Banda distorted the mission of the Khalsa neglecting the Sant part of the Sant-Sepahi tradition, established by Guru Gobind Singh at Anandpur Sahib.

When government knew this that banda Singh went against wishes and started establishing raaj, they outraged. Mata Sundri was also at delhi during that period. Even Sikhs who were send with Gobind Singh Binod Singh and Baj Singh left him due to his activities, which were against Hukam of Guru Ghar. Fort was seized at Gurdas Nangal and Tatt Khalsa came out of it on orders of Mata Sundri and Government. He want to stay in fort due to his reasons only and haven't agreed other sikhs. Neither he saved himself along with he take many. Tatt Khalsa escaped from fort as they knew that they will not survive. Banda had fight with Binod Singh and his brother and hurted his brother.

Baba Binod Singh, one of 5 sikhs sent to accompany Banda, left Banda Singh's party and joined the Tatt Khalsa (Mata Sundri's side), when he was in the fort at Gurdas Nanagal. Where government gave Hukamnama of capture Banda Singh and Sikhs, Mata Sundri also support government in delhi. She also excluded brother of Binod singh from Jatha of Bandai Sikhs. Later banda Bahadur was punished. He was tortured, according to Shariah of that time, and was killed.

There are many confusing things concerning Banda's Rule, and questions from people of Tat Khalsa.

Some says Banda Singh Bahadur never initiated any bandai sikhs they even added that Gobind Singh said banda singh to rule punjab and Mata Sundri was scare of government. So his history is quite confusing. Some of his positive works go in his favor like he made Coin on name of Nanak and he gave some of his life for Sikhs. but his latter life is not appreciated.

Every Historical Sources is common on single point that he became Egoistic and wanted to become Guru. 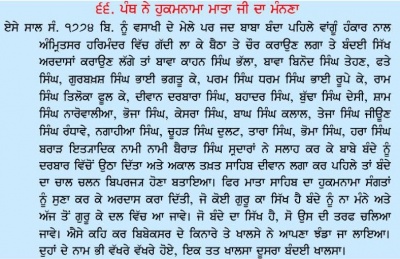 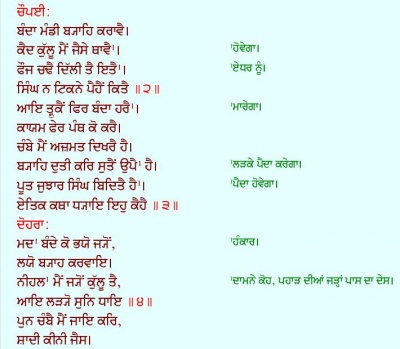 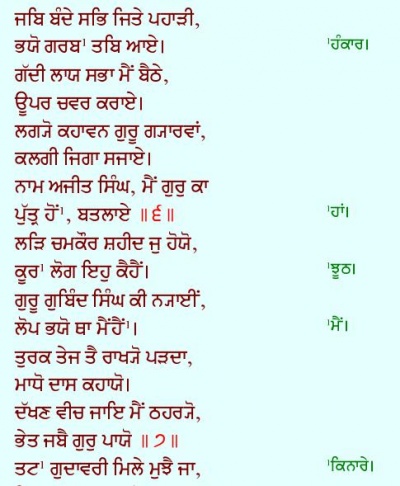 ‘Banda wished to make Sikh abandon their blue dress, to refrain from drinking and eating flesh: and instead of exclaiming Wa! Guruji ki Futteh! Wa! Khalsaji ki Futteh! The salutations directed by Govind, he directed them to exclaim, Futteh D’herm! Futteh dersan! Which means, ‘Success to piety! Success to the sect!’ These innovations were very generally resisted: but the dreaded severity of Banda, made many conform to his orders. The class of Acalis, or immortals, who had been established by Guru Govind, continued to oppose the innovations with great obstinacy: and many of them suffered martyrdom, rather than change either their mode of salutation, diet or dress: and, at the death of Banda, their cause triumphed. All the institutions of Guru Govind were restored.’ 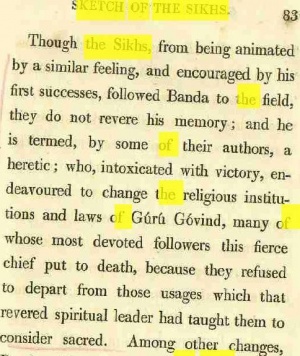 ‘They initiate through ‘Charna Amrit’, keep ‘Janju’ (Hindu caste string signifying Brahmin lineage), wear white clothes, black or green clothes they never wear, they wear breaches coming below knee. On meeting they say, ‘Darshan Ji Ka Khalsa Darshan Ji Ki Fateh’. At the end of their name they either have title of Singh or Das.’ 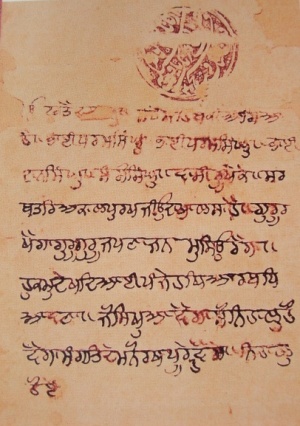 According to various Sikhs historical texts such as 'Pracheen Panth Prakash', 'Suraj Prakash', and Budha Dal oral tradition as told by the elderly Baba Mehr Singh, etc., Banda Bahadur, although a Sikh, was never initiated as Khalsa as modern Sikhs believe. According to orthodox Sanatan Sikh tradition and Budha Dal oral tradition as recounted in Pracheen Panth Prakash, over time, Banda was overwhelmed with false pride and became arrogant. His mistreatment of the Khalsa, and alterations of the Guru-ordained Khalsa traditions, resulted in the Khalsa warriors loosing respect for him. Banda declared himself a Guru, advocated teetotalism (a throwback to his earlier life as a Vairagi), altered the Khalsa salutation, stopped wearing blue, etc. The mighty Akali Nihang Singh Khalsa, lead by Akali Nihang Baba Binod Singh and his son, Akali Nihang Baba Kahn Singh opposed these Hindu Vairagi innovations of Banda. Such was the fighting that the Akali Nihang warriors risked martyrdom in order to oppose Banda:

Critical non emotional and unbiased Reasearch is needed on this side to expose the truth.