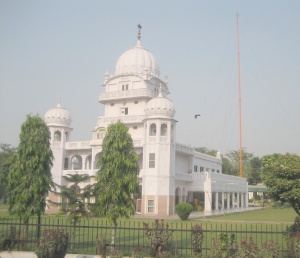 Gurudwara Manji Sahib in Ludhiana District's Alamgir village reflects yet another landmark in the life of the 10th Sikh Guru, Guru Gobind Singh. The Guru was pursued by the Mughal Army and it was at the site where this Gurudwara now stands, where he paused and rested, blessing it with his presence.

Following the siege of Anandpur Sahib, Guru Gobind Singh, after evading the Mughal and Rajput attackers at Chamkaur, came to Macchiwara. It was then that two Pathan brothers, Ghani Khan and Nabi Khan, even at the prospect of facing certain death, helped the Guru to escape from the pursuing Mughal army. Here Guru Gobind Singh donned the blue robes of a Sufi pretending to be the Pir of Uchch. He loosened his hair and accompanied by the Pathan brothers and three Sikhs, his fellow survivors of the Battle of Chamkaur, he was carried in a palanquin with the 5th man waving a chanwar over the Guru's head and taking turns to spell the others as they passed safely through enemy lines. He discarded his disguise at Alamgir and took a horse which was presented to him by Bhai Naudha, a resident of Alamgir.

On reaching Alamgir the Guru ordered his followers to fetch drinking water from a nearby well. But, the villagers told Guruji, "that the water of the well had become contaminated as the nearby wall had fallen into it." The guru, while seated then shot an arrow into the ground where a spring of drinking water bubbled forth. Today this spring has been converted into a tank known as Tirsar', (Arrow Lake). "The Guru said that whoever visits the holy tank with full faith, all his pains and worries would be cured."

As a Manji or palanquin had been used to bring the disguised Guru to Alamgir, as the 'Peer of Ucch', the Gurudwara was called Manji Sahib. The original palanquin has been preserved here, in an underground cell, to this day. For devotees, Gurudwara Manji Sahib is a pilgrimage site as well as a tourist destination, both for its sanctity and the slice of Sikh history that it offers. It is one of the many shrines of the Sikhs, contributing its bit to the history of Sikhism. 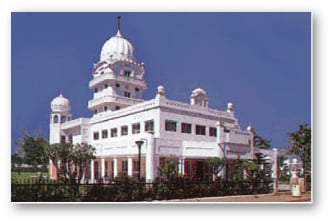 Gurdwara Manji Sahib (Alamgir Sahib) is situated in the Alamgir Village in Ludhiana District. Guru Gobind Singh, after his four sons & mother were martyred by the Mughals, was going from Machhiwara on a bed as " Uch Da Pir " and reached here on 14 Poh 1761 Bikrami (1704 A.D.). On reaching here, one of the horse traders of the village named Bhai Nigahia Singh, gifted a horse to Guru Sahib. Nabi Khan & Gani Khan were sent back with the bed. Guru Sahib asked an old lady who was picking cow dung whether he could get some water from somewhere to take bath to which the old lady replied that " Pir Ji this is a place of ruins, there is no water here. There is a well far away but there is a big python that lives there, no one goes there.

Guru sahib hit the python with an arrow giving it " Mukti " ( exemption from further transmigration ) & the python fell into the well. When the Sikhs went to fetch water, the water had gone bad so close to where Guru sahib was sitting, Guru sahib hit one more arrow and there was a water spring that came out; all the Sikhs had a bath. On seeing this miracle, the old lady fell into GURU SAHIB's feet & said " Peer Ji you are a wonderful Peer, I have a request. I have leprosy & i have gone to various places to get the treatment done but it has not been cured, kindly cure my disease & help me to get rid of this disease. GURU SAHIB said that whoever takes a bath under this water spring with belief, GOD will cure all his sadness. Then GURU JI sat on the horse given by Bhai Nigahia Singh & went towards Raikot. The old lady had a bath in that water spring & was cured. She went back to the village & told about the whole story. The place where Bhai Nabi Khan & Bhai Gani Khan kept GURU SAHIB's bed, today at that place exists a beautiful Gurudwara known as Manji Sahib.

This Gurudwara stands at a place where Guru Gobind Singh stayed for a few days after covering journey full of hazards, because of the presence of Mughal military contingents in the area. On reaching Alamgir 11 km from Ludhiana and not finding any drinking water, the Guru shot an arrow into the ground where appeared a spring. This spring has been converted into a tank known as 'Tirsar' (arrow lake).

Nearby stands the magnificent six-storied Gurudwara Manji Sahib. Here a devoted Sikh presented a horse to Guru Gobind Singh. Thenceforth he discarded traveling in a Palki (palanquin). He also gave a very affectionate send off to Nabi Khan and Ghani Khan by bestowing a Hukamnama by which their services were appreciated. This Gurdwara is situated only a few kilometers away from the industrial town of Ludhiana popularly known as Manchester of India. Pilgrims and tourists can get suitable accommodation in private hotels and tourist bungalows of the Punjab Government at reasonable rates.

Gurdwara Alamgir is situated only 11 kilometers south of Ludhiana along the Ludhiana-Malerkotla highway in the memory of Guru Gobind Singh ji who had spent a few days to refresh himself of the tedium of an unrelenting fight against the Machiavellian enemy. The Guru had arrived here in the robes of Pir of Uchch. Bhai Daya Singh, Dharam Singh and Man Singh and two Afgan brothers Ghani Khan and Nabi Khan carried him in a palanquin. The Guru discarded the palanquin at Alamgir and took a horse which was presented to him by Bhai Naudha, a resident of Alamgir. Gurdwara Manji Sahib was later constructed where the Guru had stayed. The shrine is now called Gurdwara Manji Sahib Alamgir which is the most frequently visited Gurdwaras in Ludhiana district.