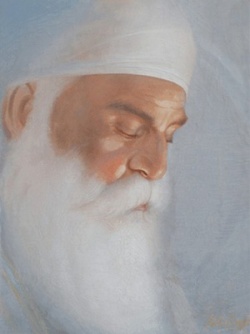 Sikhism is a way of life; a disciplined mode of living coupled with a belief in the presence and unity of one God, the equality of all mankind, dedicated faith in the Gurus' word and love for all of humanity.

The stepping stone for a Sikh is to accept the one God and remember Him with ones mind and acknowledge Him through ones daily actions. A Sikh puts his trust in God alone rather than in other beings, relatives, wealth or possessions.

To act in His name and gradually reach a stage where, as the Guru says, "Water mingles with water and light merges in the light, discarding their separate existence."

Originality and clarity of the Sikh faith was instrumental in promoting it from its inception in about 1499 and the voluntary adoption by the masses with eagerness and whole-heartedness. "Keep the message simple" appears to be the common thread throughout Sikhi concepts. Simran - meditating and remembering the Creator and Seva - willingness to give ones labour for free - are the bedrocks of Sikhi. If you cannot focus your mind on the Lord; see God in all; believe in the Creator, then the journey is going to take a little longer.

Equality, non-discrimination, true justice, and worship of only One God, are basic values that are well-known and gave the world a simple and universal faith. Today, some 540 years after the birth of the founder of Sikhi, Guru Nanak, Sikhism has more than twenty two million followers, and it is the fifth largest faith in the world. Sikhi is respected the world over and is known as a religion of peace and unity of mankind.

The Sikh Gurus promoted all human beings as one and the same, and they are all above discrimination. The Gurus showed real love for all of humanity. Muslims were equally dear to them as Hindus, or any others.

It is well known that Bhai Mardana a Muslim, spent his whole adult life with Guru Nanak, accompanying the Guru with his Rabab as a musician and the Guru's closest companion everywhere that the Guru went.

The foundation of Harimandir Sahib in Amritsar - the premier Sikh shrine, was laid by a Muslim saint Hazrat Mian Mir. Guru Arjun Dev incorporated in Guru Granth Sahib - the Sikh Holy Book, hymns of God-oriented saints - both Hindus as well as Muslims. Hymns of any saint that found a place in this Holy Book, are honoured like those of the Gurus, and every Sikh bows equally in reverence to all of them.

The Sikh faith is a faith of learning and spiritual self-improvement; of dialogue; of intellectual evolution and certainly not of "conversion"; a person becomes a Sikh by choice and certainly not by compulsion or with inducements or incentives or by any other devices. It is a truly interfaith approach to religion undertaken in way where the universal unity of the human spirit is honoured. Sikhi promoted interfaith principles when the word 'interfaith' did not exist!

The message of the holy Granth

See all the articles in this section: The Message of Gurbani

The articles below are based on the guidance given by the Sri Guru Granth Sahib on certain important human issues: