From SikhiWiki
(Redirected from Sewa)
Jump to navigationJump to search 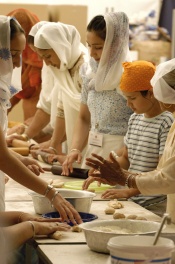 Seva also Sewa, short for the word Karseva refers to "selfless service", work or service performed without any thought of reward or personal benefit. In the Punjabi language the person performing such service is called a Sevadar.

All Sikhs are encouraged by their Guru (Guru Granth Sahib) to perform Seva or Selfless Service. This is not only good for community relations but also is good for the moral uplifting of the person. You will find Sikhs engaged in free service in Gurdwaras washing dishes, cleaning the floors, serving food, etc.

Sikhs are also encouraged to help the community by performing unpaid work in hospitals, 'old peoples' homes, community centres, etc. Volunteers engaged in Seva are referred to as Sevadars and for many people this activity forms an essential part of their life, providing spiritual fulfilment and practical benefits.

Sikhism is founded on principles of Sarbat da bhalla - working towards the "common good of all". For Sikhs, this means reaching out to serve and uplift all of humanity as an expression or devotion to the Creator. Many other Sikh institutes, such as Guru-ka-Langar, Kirtan, Paath, etc., depend on the performance of Seva by many in the congregation. So the principles of Seva underpin many Sikh values - such is the importance given to Seva in Sikhism.

This point is highlighted by the Guru in many places in the Guru Granth Sahib. The text explains the spiritual benefits of doing seva and the ways in which one should perform it, focussing on the state of the mind when performing seva. 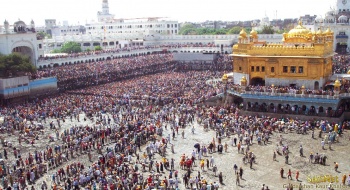 Karseva at Harimander Sahib, The cleaning of the ' Amritsar' - The pool of Nectar

SEVA, from the Sanskrit root sev meaning to serve; wait or attend upon; honour; or worship, is usually translated as ‘service’ or ‘serving’ which commonly relates to work for which one is paid. This, however, does not convey the sense in which the term is used in the Sikh tradition.

The word seva has, in fact had two distinct connotations:

Traditionally in the Indian (Hindu) society, seva in the sense of worship (of gods) has been the preserve of the high-caste Brahmans, while that in the sense of service (to man) has been relegated to the lowest of the castes. In the Sikh sense, the two connotations seem to have merged together for the reasons:

Therefore service rendered to humanity (i.e. God in man) is indeed considered a form of worship. In fact, in Sikhism, "no worship is conceivable without seva" (GG, 1013). The Sikh is forbidden from serving anyone apart from God ("Serve you the Lord alone: none else must you serve" (GG, 490)).

However, this also means, that whomsoever we serve, we are really serving our Lord through her/him. Therefore it becomes incumbent upon the Sikh to render seva with the highest sense of duty since thereby he or she is worshipping the Lord.

Seva in Sikhism is imperative for spiritual life. It is the highest penance (GG, 423). It is a means to acquiring the highest merit. The Sikh often prays to God for a chance to render seva. Says Guru Arjan, Nanak V, “I beg to serve those who serve you (GG, 43)” and “I, your servant, beg for seva of your people, which is available through good fortune alone (GG, 802).” According to Guru Amar Das, “He who is turned towards the Guru finds repose and joy in seva” (GG, 125).

Three varieties of seva are sanctioned in Sikh lore:

The first of these is considered to be the highest of all and is imperatively prescribed for every Sikh. “Cursed are the hands and feet that do not engage in seva” (Bhai Gurdas, Varan, 27.1).

In traditional Indian society work involving physical labour was considered low and relegated to the lowest castes. By sanctifying manual labour as an honourable religious practice, the Sikh Gurus established the dignity of labour, a concept then almost unknown to Indian society. Not only did the Gurus sanctify it; they also institutionalized it, e.g. service in Guru ka Langar (the Guru’s community kitchen) and serving the sangat (holy assembly) in other ways such as by grinding corn, fanning the congregation to lessen the rigour of a hot day, drawing water for the thirsty or even the modern practice of shining or cleaning another's shoes.

“I beg of you, O, Merciful One, make me the slave of your Slaves. . . Let me have the pleasure of fanning them, drawing water for them, grinding corn for them and of washing their feet,” prays Guru Arjan (GG, 518).

Seva through the mental apparatus ("maan") lies in contributing ones talents—creative, communicative, managerial, etc.—to the welfare of the community and mankind in general. It also lies in sharing the pain of others. Response to the pain of others is a, sine qua non, of the membership of the brotherhood of man. That is why the Sikh prayer (Ardas) said in unison ends with a supplication for the 'welfare of all Sarbaht dah Phahla. Seva of this kind is motivated not by the attitude of compassion alone, but primarily to discover practical avenues for serving God through man.

Seva through material means (dhan) or philanthropy (dan) ("donation") was particularly sought to be made non-personal. The offerings (kar bheta) made to the Gurus and the dasvandh (tithe) contributed by the Sikhs went straight into the common coffers of the community. Personal philanthropy can be debasing for the receiver and ego-entrenching for the giver, but self-effacing community service is ennobling. Seva must be so carried out as to dissolve the ego and lead to self-transcendence, which is the ability to acknowledge and respond to that which is other than oneself. Seva must serve to indicate the way in which such transcendence manifests in one’s responsiveness to the needs of others in an impersonal way.

The Sikh is particularly enjoined upon to render seva to the poor. “The poor man’s mouth is the depository of the Guru”, says the Rahitnama of Chaupa Singh. The poor and the needy are, thus, treated as legitimate recipients of dan (charity) and not the Brahman who had traditionally reserved for himself this privilege. Even in serving the poor, one serves not the individual concerned, but God Himself through him. Even as one feeds the hungry, it has been the customary Sikh practice to pray:

“The grain, O God, is your own gift. Only the seva is mine which please be gracious enough to accept.” 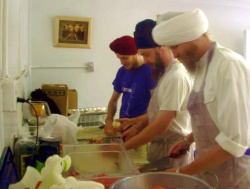 In the Sikh way of life, seva is considered the prime duty of the householder (grihasthi). “That home in which holymen are not served, God is served not. Such mansions must be likened to graveyards where ghosts alone abide”, says Kabir (GG, 1374). The Sikhs are all ordained to be householders, and seva their duty. In Sikh thought, the polarity of renunciation is not with attachment, but with seva.

True seva according to Sikh scriptures must be without desire (nishkam), guileless (nishkapat), in humility (nimarta), with purity of intention (hirda suddh), with sincerity (chit lae) and in utter selflessness (vichon ap gavae). Such seva for the Sikh is the doorway to dignity as well as to mukti (liberation). “If one earns merit here through seva, one will get a seat of honour in His Court hereafter” (GG, 26).

According to Sikh tenets, “You become like the one you serve” (GG, 549). Therefore, for those who desire oneness with God, serving God and God alone is the prime way. But God in Sikhism is transcendent as well as immanent. The Transcendent One is ineffable and can only be conceived through contemplation. Service of God, therefore, only relates to the immanent aspect of God and comprises service of His creatures. Humanitarian service is thus the Sikh ideal of seva.

Above adapted from article By J. S Neki 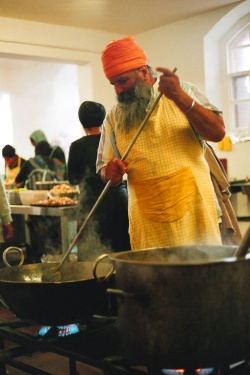 In India, seva or selfless service to others is a long-standing tradition. In Sikhism particularly, it continues to be widely practiced with great devotion. I was a witness to the Sikhs’ spirit of seva in action.

On one wintry night, my wife and I were travelling by train from Delhi to Amritsar. Once or twice when I woke up I found it was raining heavily outside. At dawn, I found the train had stopped just before Ludhiana station. The track ahead was submerged under water. I stood near the door of the bogey to watch with worry the pounding rain and rising water.

Then I saw three well-built Sikhs approaching my bogey. They held umbrellas and a bucket each in their hands. One of them addressed me, “Do you need some tea?” It was most welcome. “Yes, please,” I replied.

“Then please bring your glass and we will serve you. And if others in your bogey also need tea, tell them too to please come and get it.”

After getting two teas, I asked, “How much do I pay?”

They looked at me, amused, “Bauji, we are from the gurdwara,” one of them said pointing to the gurdwara building not far from the railway track. “It is a seva we are doing. When we saw your stranded train, we thought you people would need tea. Now, if you’d excuse us, we have to cover the rest of the train.”

I gave one glass of tea to my wife and told her the story. She looked at the foul weather outside. She was impressed by the dedication of the gurdwara staff. How steeped one must be in the seva philosophy to brave rain and chilly weather to serve free hot tea to stranded passengers! “Some seva,” she remarked.

Then a thought occurred to me. Those Sikhs had done their duty, but had I done mine? When they came back after covering the entire train, I gave them a little contribution for the gurdwara fund. They were reluctant to accept it, but I said, “It is my seva for your gurdwara.”

Ramesh Seth has made a documentary on the Golden Temple. 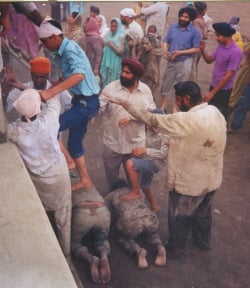 Main article: Seva: Neither a Shield, Nor a Sword

Is this what seva is all about? ....More