Gurbani about the Universe and the Lord 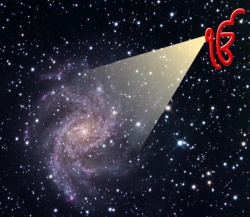 "You created the entire universe, and it is You who sustains it

The Gurbani of the Guru Granth Sahib has a lot to say about the Lord of the Universe and His (or Her) creation.

God in Sikhism is a term used to denote any object of worship or evocation used to signify the belief of most modern religions in the existence of a "Supreme Being" or "Supreme Spirit" who is the source and support of the spatio-temporal material world.

Theologians remember Him by the name of God. The fundamental belief of Sikhism, too, is that God exists, not merely as an idea or concept, but as a "Real Being", indescribable yet not unknowable. The Sikh Masters, however, never theorized about proofs of the existence of God.

For them the Creator of all that exists is too real and obvious to need any logical proof. Guru Arjan, Nanak V, says, "God is beyond colour and form, yet His presence is clearly visible" (GG, 74), and again, "Nanak's Lord transcends the world as well as the scriptures of the east and the west, and yet he is clearly manifest" (GG, 397).

In any case, knowledge of the ultimate Reality is not a matter for reason; it comes by revelation of Himself through nadir (grace) and by anubhava (mystical experience). Says Guru Nanak, budhi pathi na paiai bahu chaturaiai bhai milai mani bhane (He is not accessible through intellect, or through mere scholarship or cleverness at argument; He is met, when He pleases, through devotion) " (GG, 436).

What does Gurbani say about God and the Universe?

In his beloved composition, Japji sahib found in the Guru Granth Sahib, Guru Nanak the first of the Sikh Guru explains,

- the limit of the Universe cannot be perceived; it is beyond the capability of measurement or of real comprehension by the human mind. Further, the Guru tells us that the limits of the Creator and His creation cannot be found.

The Universe will depart, but...

The Universe is His arena of play!

He sustains the Universe

How does one attain Him?

Surprisingly, God acts according to the will of His servants

What do scientists say?

So how big is our universe? - HUGE So huge in fact that I'm going to have to play around with scales so you can get a better idea.

According to the standard inflationary model of cosmology, the visible portion of our universe; the one mapped by our telescopes is an infinitesimally small speck in a much larger universe of at least a 1035 light-year across! I admit this number is really, really big, and almost impossible to imagine.

So lets shrink everything down, WAY down, just so we can get a better grasp of it. Let's imagine that the entire universe that we have seen in all the world telescopes, all the galaxies, all trillion of them, extending out 13 billion light years in every direction is shrunk down to the size of a golf ball. Now you are holding the entire visible universe in the palm of your hand.

So how big is the actually 1035 light year universe in comparison? If we do a volume calculation, the actual universe contains 1060 of those golf balls! Wow, I guess we didn't shrink things down far enough, but this will have to do. So how big a volume would 1060 golf balls fill up? Try a sphere 850 light years across! So imagine a mass of golf balls that big, and each one of those golf balls contains all the stars and galaxies that we can see through our telescopes.

At this speed the entire galaxy would be in reach before you can say the word "go", and wam, you're there. At this speed, you could travel to the nearest galaxy Andromeda in 22 seconds. And you could cross from one end of the visible universe to the other in 72 hours.

So, lets speed up our warp vehicles again, so that we can travel a quintillion light years every second. At such a speed we could cross the known universe 100 million times in one second. Ok, so now that we are travelling at a speed that might as well be infinite, how long would it take to cross from one side of the universe to the other? 3.7 billion years

Some say the Universe in infinite in size

Some physicists such as Max Tegmark believe the universe is actually infinite in size. If the galactic density of our own neighborhood is typical across this entire domain, and according to the data from the satellite COBE it is, then our bubble-universe should contain at least another 10100 galaxies.

This is such a large figure, that it's difficult to explain it. So to give you an idea of how large a number this is, it's far larger the the number of atoms that compose every object in our own visible universe, which as you remember extends out 13.2 billion light years in every direction.

This too is very difficult to conceptualize. So we'll have to scale down even further to a grain of sand. The number of atoms composing a grain of sand is about 1023 atoms, or 100 trillion trillion atoms for each grain of sand on a typical beach.

And just think how many grains of sand are on your typical beach, let alone something the size of the Sahara. And that's just on the surface of the earth. All the sand in the world composes much less than 0.00001% of the mass of the earth. The number of atoms composing the Earth is about 1060.

And the Earth in turn is one tiny planet around a small star in an ordinary galaxy, among hundreds of billions of galaxies in our very local neigborhood, which we call the visible universe. So 10100 is a very very big number of galaxies! Adding it all together and you get more galaxies in our universe than there are atoms composing every object in our visible universe.