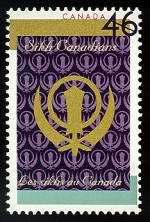 The Insignia of the Khalsa: The Khanda (Punjabi: ਖੰਡਾ, khaṇḝĝ) is one of most important symbols of Sikhism. This is emphasized by the fact that many Sikh flags, including the Nishan Sahib, have the Khanda on them. It is a collection of four weapons commonly used by Sikhs at the time of Guru Gobind Singh.

In the centre of the insignia is the two-edged sword which symbolises the Creative Power of God that controls the destiny of the whole universe. It is the Sovereign Power over life and death. One edge of the Sword symbolises divine justice, which chastises and punishes the wicked oppressors; the other edge symbolises Freedom, and Authority governed by moral and spiritual values.

On the outside of the two-edged sword, we can see two swords: 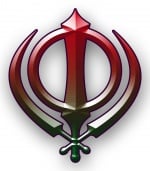 There must always be a balance between the two, and this balance is emphasised by a circle inside. This circle is what is called a Chakra or Chakkar. The Chakra is a symbol of all embracing Divine Manifestation, including everything and wanting nothing, without beginning or end, neither first nor last, timeless, and Absolute. It is the symbol of oneness, of Unicity of Justice, Humanity, and the Immortality. Almost all Sikh warriors used to wear it in the eighteenth century, and Nihangs of today still do.

The Chakra / Chakkar which was worn by the great martyr, Baba Deep Singh, is still preserved in the sanctum sanctorium of the Akal Takht. On it is inscribed the Mool Mantar and that is what it symbolises.

These images have no copyright. Please feel free to liberally use them: