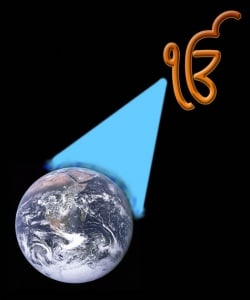 Complete equality, non-discrimination, standing up for true justice, promoting an enduring spirit of positivity (Chardikala), life of service & dedication, promotion of loving communities and the respect, recognition & worship of only One God - the creator of everything and everyone are basic values that are well-known and gave the world a simple and universal faith. Today, some 540 years after the birth of the founder of Sikhi, Guru Nanak, it has more than twenty five million followers, and is the fifth largest faith in the world.

Message for the World

For the Gurus promoted all human beings as one and the same, and they are all above discrimination. The Gurus showed real love for all of humanity. Muslims were equally dear to them as Hindus, or any others. It is well known that Bhai Mardana a Muslim, spent his whole adult life with Guru Nanak, accompanying Guru with his Rabab as a musician and the Guru's closest companion everywhere that the Guru went.

The foundation of Harimandir Sahib in Amritsar - the premier Sikh shrine, was laid by a Muslim saint Hazrat Mian Mir. Guru Arjun Dev incorporated in Guru Granth Sahib - the Sikh Holy Book, hymns of God-oriented saints - both Hindus as well as Muslims. Hymns of any saint that found a place in this Holy Book, are honoured like those of the Gurus, and every Sikh bows equally in reverence to all of them.

The Sikh faith is the faith of preaching; of dialogue; and not of conversions. It is a truly interfaith approach to universal brotherhood of humanity undertaken when the word 'interfaith' did not exist.

There is one God

Equal rights for the Woman

Equality of all Mankind

Protect the rights of others

Be ever ready to sacrifice for others

Care for all humanity

Live to the highest spiritual level

Be gentle, act with humility