What is the AKJ? 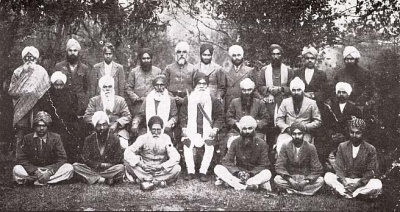 The Akhand Kirtani Jatha (AKJ) is simply a collection of Sikhs who believe in living life according to how Guru Sahib has instructed. It is widely felt that parts of the Panth are losing the real message of the Gurus and slowly deteriorating into Brahminical rituals. For this reason, it is important that those who want to live as according to the Guru's command can do so in a collective manner (i.e. in the Sangat of other Gursikhs).

What do you do?

The main activity of the Jatha is to do Kirtan (i.e. the singing of Gurbani), although the Jatha also does Akhand Paaths, Gatka, Sikhi Camps, youth outings, seminars and regular Sikhi classes for children. AKJ Kirtan programmes take the form of Rainsbai Kirtans (which go on all night) and also Kirtan Darbars (which usually last around 6 hours). The Kirtan is usually sung with basic musical tunes - the main emphasis of the Kirtans being on the Gurbani rather than the music.

What is the history of the AKJ?

The AKJ was started by the well-known Gursikh, Bhai Sahib Randhir Singh in Punjab in the early 1900s. Ever since then, Gursikhs have been meeting together to sing Gurbani. The AKJ has spread across many countries such as the UK, USA, Canada, Australia, India, Germany, France, Belgium, the Netherlands, Malaysia, Singapore and other nations. In 1978, Bhai Fauja Singh led a procession to oppose the Indian government's attempts to destroy Sikhism and along with another 12 Gursikhs was brutally shot down. Ever since then, Gursikhs from the AKJ have been active in working against the Indian governments oppression of the Sikhs as well as further propagating the message of the Gurus amongst the Sikhs.

Who was Bhai Sahib Randhir Singh?

Bhai Sahib Randhir Singh was one of the few shining lights of the twentieth century. He was born in 1878 to Sikh parents in Punjab. He was a true Saint-Soldier; not only did he spend every breath in the remembrance of God, but also bravely fought for righteousness and against tyranny. More can be read about Bhai Sahib Randhir Singh in his autobiography.

Do you have a figure-head or Sant?

Absolutely not. The AKJ views the Shabad-Guru as the only Sant or figure-head in Gursikhi, through which we can all re-unite with God. There have been many highly respected and spiritual Gursikhs within the AKJ, but they have not been placed on any pedestal or given any title like "Sant". The AKJ believes in the equality of mankind and that every Sikh has a direct relationship with the Guru. We do not believe that it is necessary for a third party to intervene in this relationship.

Are you part of the Khalsa Panth?

Why do you count Keski as one of the 5Ks and not Kesh (Hair)?

We believe that Kesh (hair) are not part of the five Ks, although they are obviously essential since Kesh are the hallmark of Guru Sahib. Hence Kesh are placed in even higher regard than the five Ks themselves. We believe that Keski (a small turban) was the original fifth K, but due to various reasons, this has changed over time to become Kes. A full discussion on the Keski issue can be viewed in the Literature section.

Do you allow meat eating?

We strongly oppose the viewpoint that meat eating, in any form, is allowed in Gurmat. For a detailed explanation see Vegetarianism.

Naam Drirtaa is the method used to instil Naam into those who wish to receive the divine gift of Amrit during the Amrit Sanchaar. This method is not the invention of the AKJ, but has been ongoing since the first Amrit Sanchaar. Other Panthic organisations also continue to use Naam Drirtaa. The method can only be explained in detail by the Panj Pyarai during an Amrit Sanchaar, as only the Guru has the right to impart the Naam. However, generally speaking, Naam Drirta sends the Naam into ones body and enables the Sikh to begin Simran with each and every breath.

Why does nobody else do Naam Drirtaa in the Panth?

Infact, there are some other smaller organisations which have also preserved Naam Drirta.

What is Raagmala and what do you think if it?

Raagmala is a small composition which appears on the final page of most Saroops of Sri Guru Granth Sahib Ji. We believe that Raagmala is not Gurbani, but was added to Guru Granth Sahib at a later date. The Raagmala was not part of the original Bir compiled by Sahib Siri Guru Arjan Dev Ji, neither was it part of the Damdami Bir. We beleive It was composed by a poet named Alam, a contemporary of Emperor Akbar - in the year 991 Hijri or Bikrami 1641 - about 20 years before the compilation of Sahib Sri Guru Granth Sahib Ji. For a full discussion on the topic, please go to the Literature section.

What is Sarab Loh Bibaik?

Sarab Loh Bibaik is the practice of eating food which has been prepared only by Gursikhs and to prepare and serve this food in Sarab Loh (iron) utensils, as far as possible. The reasons for this practice is highlighted in the Literature section.

Do you have a separate Langar from the rest of the Sangat?

No. Those Gursikhs who have undertaken Sarab Loh Bibaik will obviously not take food that has been prepared in any way other than as according to the Sarab Loh Bibaik Rehat. However, such Gursikhs do not expect any special treatment and often go without food rather than putting a strain on others. Guru ka Langar was originally prepared using Sarb Loh utensils and only prepared by Amritdhari Gursikhs. The word Bibaik means Giaan (knowledge) to distinguish between right and wrong.

Why do you do Kirtan so much?

Kirtan has been highly regarded by Guru Sahib. For example, Guru Sahib says "Kaljug Meh Kirtan Pardhana, Gurmukh japeeai Laaey Dhiaana", which means that in this age, Kirtan is the highest deed and the Gurmukh partakes in it with full concentration. There are numerous other Shabads in Gurbani which teach us the importance of Simran and Kirtan in Sangat.

What happened during Vaisakhi 1978?

On Vaisakhi day, 1978, the Indian Government sponsored Narakdharis ( known as "Sant Nirankaris") held a convention which was designed to hurt the Sikh Nation. They mocked the Sri Guru Granth Sahib ji and the Gurus, the Char Sahibzaade and the Panj Pyara. Their selfstyled Guru sat in Palki like SGGS. These insults were a step too far and the Sikh Nation arose to protest against such unprovoked attacks. Led by Bhai Fauja Singh, 13 Sikhs gave their lives as they were mercilessly shot down. Ever since then, the Khalsa Panth has been working to get rid of the Indian government's grip around our sovereign Nation. To read an in-depth analysis of this historic day, please visit the Literature section.

How big is the AKJ membership?

The AKJ does not have a membership system. We believe that all Sikhs belong to the Khalsa Panth and that any allegiance to a particular organisation is wholly secondary. However, the AKJ is a huge organisation spanning many countries and it is fair to say that it is a very significant and important part of the Khalsa Panth.

Why do AKJ women wear a dastar?

Firstly, to be precise, there is no such thing as "AKJ women", since all are part and parcel of the Khalsa Panth. Those who live by the AKJ standards wear a Dastar or Keski because we believe that the fifth Kakar is Keski, not Kes, as mentioned above.

Do you believe that the AKJ Amrit is the only Amrit?

Absolutely not. Amrit is one and the same, whether given during AKJ programmes or elsewhere. However, we do believe that those Gursikhs that form the Panj Pyarai must be of the highest order in terms of Gursikhi Rehat and Gursikhi Jeevan.

Why do you do Kirtan in the way that you do?

Kirtan during AKJ programs is traditionally done with very simple tunes, as opposed to being done with the complex Raags. The Sangat finds that Kirtan done in such a style is very spiritually uplifting. The emphasis in AKJ programmes is most definately placed with the Gurbani that is being sung, rather than the sound of the music.

What is your view on the word "Sant" in Gurbani?

Along with many scholars and other organisations, the AKJ believes that the word "Sant" is reserved mostly for Guru Sahib. When used in the plural, the word "Sant" refers to the Sangat as a whole. For this reason, we dislike the use of the word "Sant" in association with any individual, no matter how great a Gursikh he/she may be.

What makes AKJ Sikhs different from other Gursikhs?

AKJ gursikhs have very much 'Nimartaa'. When they meet to other gursikhs then they will always bend and say 'Fateh'.