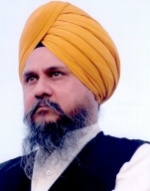 Dr.Gurnam Singh, is the youngest son of renowned Shiromani ragi Bhai Uttam Singh. Dr Singh, born into a family of famous Kirtankars, was introduced to kirtan at an early age by his father. Later, he studied kirtan under the famous Professor Tara Singh of Patiala. Gurnam Singh Ji has written numerous books and edited some of the books written by Prof. Tara Singh ji. In addition he has an album to his credit in which he has sung shabads in the various raags mentioned in the Guru Granth Sahib.

Currently he serves as the Professor and Head of the Gurmat Sangeet Chair and Department of Gurmat Sangeet at at Punjabi University Patiala. Also he is a Senior Fellow at Sangeet Natak Academy in New Delhi. Dr. Gurnam Singh has published many books, research papers, documentary films and with the grace of Guru, for the first time, he has presented a complete recording of 31 main Raags forms mentioned in the Sri Guru Granth Sahib for the students, researchers and listeners of Gurbani.

In 2002 he was honored at the Harvallabh Sangeet Samiti. In addition he also received the Gurmat Sangeet Award. 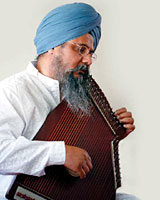 Singh's expertise is a boon for students

With his flowing beard and ruddy face, he could easily be mistaken for a Granthi from the nearest gurudwara. Gurnam Singh’s name even elicits a respectful response from the exponents of Gurmat musicology, an umbrella term for Sikh religious music, for Singh is no ordinary music lover. He has defined and delineated the mellifluous rendition of 31 ragaas, as well as an equal number of rag parkars (forms of ragaas) enshrined in the Guru Granth Sahib.

Singh is also credited for being the first exponent to have identified all 62 ragaas and rag parkars in their original forms before reciting them. Founder and head of the Gurmat Sangeet Chair at Punjabi University in Patiala, Singh was drawn towards music right from his childhood.

Appreciating his work, noted Ghazal singer Jagjit Singh says, “This very simple person is an authority on Gurmat Sangeet.” Notably, he is working on a project with Jagjit Singh, called Dhur Ki Bani.

It is a unique endeavour by Takhat Hazoor Sahib (in Nader, Maharashtra) in which they have recorded the Bani of Hindu saints and Muslim fakirs inscribed in Guru Granth Sahib in the voices of prominent Indian singers.

Singh’s vision includes, essentially, the dissemination of gurbani to every corner of the world, through Gurmat Sangeet. Had he chosen to be a performer, he would probably have joined the deluge of professional ragis, who are literally cashing in on the popular taste for shabad (hymns).

But he prefers to stick to his cause of popularising Gurmat music and restoring it to its pristine glory for the well being of all, or ‘Sarbat Da Bhalla’, as it is said in religious parlance.

When asked about the reason he prefers to work in the field of Gurmat Sangeet, Singh says it is because of the “injustice done to Punjab’s tradition of music.” Asked to elaborate, he says, “Hindustani classical music is based on Punjab’s tradition of music, and the soul of Punjab’s music tradition is Gurmat Sangeet, which contains the classical, Sufi and folk music of Punjab. But, unfortunately, a lobby of Hindustani classical musicians has never recognised this.”

Students practising with their instruments

Singh further claims that without the Punjabi Ang in singing styles, including the Dharupad, Khayal and Thumri, and the Punjabi Baj in playing the tabla, Hindustani classical music cannot be considered complete. “We have given all the major string instruments to Hindustani classical music, as well as great maestros like Ustad Alla Rakha Khan Sahib, Ustad Zakir Hussan Khan Sahib, and Bare Gulam Ali Khan Sahib.

But the powerful lobby has never given due credit to Punjab’s music tradition, neither on an academic level nor in the media,” says Singh, adding that Punjabis are invariably presented as bhangra and gidhdha players only.

To further substantiate his stand, he says, “The Harbalabh Sangeet Sammelan is organised in Jallandhar, but Punjabi maestros are not invited there. This is an example of the attitude of the particular lobby in Hindustani music.”

The Punjabi University, meanwhile, in a clear recognition of his efforts, has established a separate Department of Gurmat Sangeet and a Gurmat Sangeet Chair, with the help of Bibi Jasbir Kaur Khalsa. “I felt that no one was coming forward to save our music tradition, so I took up this challenge and began my work. Now, people are beginning to acknowledge Gurmat Sangeet,” says Singh.

Public exposure to Gurmat Sangeet has been set into motion by Singh’s work thus far. He says that Punjab’s music tradition is now attracting the younger generation as well. “They have always had the potential, but no platform to receive the proper training.

The systematic study of Gurmat Sangeet would provide opportunities to exhibit their talent. An additional advantage is that it would help the unemployment problem as well, since every gurdwara in India and abroad can absorb at least two ragis.”

Singh, engrossed in an instrumental session

Just a few days before this, the Shiromani Gurdwara Parbandhak Committee (SGPC) President, Avtar Singh Makkar, had been informed about the tradition of string instruments in Sri Harmandir Sahib, which had unfortunately vanished around two-and-a-half centuries ago.

Makkar, referring to Dr Singh’s efforts, says, “The Sikh community is thankful to Dr Gurnam Singh, who has helped in saving the great traditions of Sikh musicology well in time.”

Hindustani classical vocalist ‘Singh Bandhu’ Surinder Singh says, “With his contributions, Gurnam Singh has become an institution of music. He has done more work than dozens of institutions put together.”

At present, Singh is busy establishing the Sant Sucha Singh Archives of Music in the Gurmat Sangeet Bhawan of the Punjabi University. All the singing styles of ragaas, by noted ragis and other artists, are being preserved in it for posterity, as well as for researchers’ benefit. An online music library is also being planned.