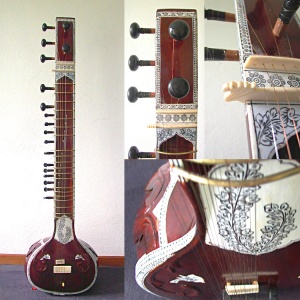 Sitar literally is a form of the Persian word - sihtar - which means three strings. "Tar" in Punjabi means "string". In the beginning, there were only three strings, but now seven strings are used and there are other strings for resonating. Sitar is perhaps the most well known of the Indian instruments. Artists such as Ravi Shankar have popularized this instrument around the world.

The components of a sitar are similar to those of the tanpura. It is a long necked instrument with an interesting construction. It has a toomba, tabli, keel, dhurch, dand, gulu, atti gahan and sirra like the tanpura. It has however seven khootiyan (pegs) and one manka (bead). It has a varying number of strings but 17 is usual with usually 7 main strings. It has three to four playing strings and three to four drone strings. The approach to tuning is somewhat similar to other Indian stringed instruments. These strings are plucked with a wire finger plectrum called mizrab. There are also a series of sympathetic strings lying under the frets. These strings are almost never played but they vibrate whenever the corresponding note is sounded. The frets are metal rods which have been bent into crescents. The main resonator is usually made of a gourd and there is sometimes an additional resonator attached to the neck.

Origin of the Sitar

The sitar developed during the collapse of the Moghul empire (circa 1700). It reflected the culture of the times in that it showed both Indian and Persian characteristics. (go to "Origin of the Sitar" for a better description.)

Parts of the Sitar

The sitar is of a complex construction. It is crafted of natural materials by extremely talented and well trained craftsmen. (go to "Parts of the Sitar" or "Making the Sitar" for a better description.)

Tuning and Stringing the Sitar

There are a number of options in tuning and stringing the sitar. Even the same instrument will be tuned differently from piece to piece, according to the requirements of the rag. A good description of the various tunings and stringing options is to be found in "Rain City Music - Sitar Tuning Charts".

The technique of the sitar is very involved. It is certainly advisable to have a teacher. However a good introduction to the basic technique is to be found in "Peter Cutchey's Online Sitar Tutorial".