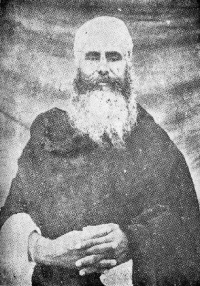 Sant Atar Singh (March, 1867-21 January, 1927), of Gurdwara Reru Sahib at Rampur, in Ludhiana district in the Punjab, was born in March of 1867 at the village of Lopon, now in Faridkot district. He was the son of Lal Singh, the village headman.

Atar Singh was married in 1885 to Bishan Kaur of Todarpur, a village near Samrala. A son, Indar Singh, was born to them in 1887. On 8 June 1887, Atar Singh enlisted in the 36th Sikh Battalion (present 2nd Battalion of the Sikh Regiment). While in the army, he received the vows of the Khalsa. He was promoted sergeant on 16 June 1896. Once, while his battalion was in the Peshawar region, he along with several of his comrades went to see Sant Karam Singh of Hoti Mardan, who was then widely known for his piety.

Atar Singh, a devout Sikh, instantly fell under the saint's spell, and determined to lead a life of seva (service) and simran (meditation). Once, while on leave from his regiment, he visited Rampur. Here, he found the old historical shrine, Reru Sahib, commemorating Guru Gobind Singh's brief halt under a reru tree (Mimosa leucophloea) during his journey from Machnivara towards the Malva country in December 1705. Seeing the site in such a dilapidated state he became determined to have it rebuilt.

During his next leave, in 1901, he with the help of the local sangat (congregation) reconstructed Manji Sahib, the inner sanctum. He spent his leave periods expanding the building and, after his retirement on 18 October 1907, he settled permanently at Rampur. He developed Guru ka Langar, and initiated monthly congregations on full-moon days. He also opened a school where young boys, especially the poor and the blind, were imparted instruction in scripture reading and Kirtan or hymn-singing with a view to training them as preachers of Sikhism.

After 20 years of service, Sant Atar Singh died at Gurdwara Reru Sahib on 21 January 1927. He was succeeded by Sant Bhagvan Singh who kept the Reru Sahib legend alive.

Sant Bhagvan Singh, in his turn, continued to manage the Gurdwara until his death in 1975 giving some 48 years of service to the Gurdwara that was once almost forgotten save the love and care of Sant Atar Singh.