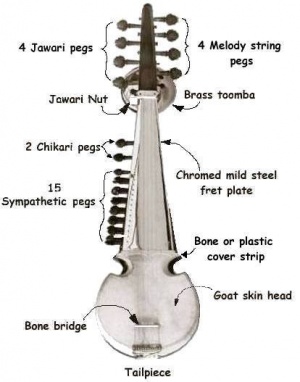 A Sarode of Maihar Prototype

Many scholarly and anecdotal accounts consider the ancestral source of the Sarode to be the Rebab, a similar instrument originating in Afghanistan and Kashmir. The Sarode is essentially a bass Rebab. The Rebab was modified by Amir Khusru in the 13th century. Dr Lalmani Misra opines in his "Bharatiya Sangeet Vadya" that the Sarode is an amalgamation of the ancient Chitra Veena, the medieval Rebab and modern Surshringar.

However, there are speculations among the Sarode community, notably from maestro Ali Akbar Khan, that a similar instrument might have existed almost two thousand years ago in ancient India. They refer to instruments which resemble the Sarode found in carvings of the 1st century in the Champa temple, as well as in paintings in the Ajanta Caves.

Amjad Ali Khan’s ancestor Mohammad Hashmi Khan Bangash, a musician and horsetrader, who came to India with the Afghan Rebab in the mid-1700s and became a court musician to the Maharajah of Rewa (now in Madhya Pradesh). It was his descendants, and notably his grandson Ghulam Ali Khan Bangash who became a court musician in Gwalior, who gradually transformed the Rabab into the Sarode we know today. A parallel, but equally credible theory credits descendants of Madar Khan (1701-1748), and Niyamatullah Khan in particular, with the same innovation circa 1820. It is possible that Ghulam Ali Khan and Niyamatullah Khan came to the similar design propositions either independently or in unacknowledged collaboration. The Sarode in its present recognizable form dates back to c.1820, when it started gaining recognition as a serious instrument in Rewa, Shahjahanpur, Gwalior and Lucknow. In the twentieth century, the Sarode received some finishing touches from Allauddin Khan, the performer-pedagogue from Maihar best known as Ravi Shankar's and Ali Akbar Khan's guru.

The design of the instrument depends on the school (gharana) of playing. There are three distinguishable types, discussed below.

Its body traditionally hand-carved from a single block of tun (Indian mahogany) or teak wood. It has a steel fretless fingerboard that makes it a difficult instrument to play. The bridge rests on the belly of the instrument, which is covered in goat skin. This version has four melody or playing strings and three rhythm strings, with the remainder being sympathetic (tarab) and jawari(or resonance) strings.

Many people mistakenly perceive the Maihar prototype to be the traditional model. This is, in fact incorrect as this version was first unveiled by Ali Akbar Khan circa 1934 when he accompanied his father on stage as a prodigious 12-13 year old. The Maihar Sarode lends itself extremely well to the presentation of alap with the four jod strings providing a backdrop that helps usher in the ambience of the raga. Inherent inadequacies in the design of the bridge, however, prevent this model for being an ideal vehicle for the presentation of jhala (or fast portions). Nevertheless, this Maihar prototype Sarode has been more popular in India and the West during the last half of the twentieth century for its rich, sonorous sound quality; and for the success of maestro Ali Akbar Khan with this Sarode type.

There are numerous other experiments being conducted by numerous highly competent Sarodiyas (or, Sarode players) in India today, but their names are best left unmentioned for the fear of attracting the ire of the self-styled preservers of tradition who do not realise that the notion of tradition itself is quite a dynamic idea.

Sarode strings are made either of steel or phosphor bronze. Most contemporary Sarode players use Roslau, Schaff or Precision brand music wire. The strings are plucked with a triangular plectrum (java) made of polished coconut shell, ebony, Delrin (TM) or other materials such as bone.

There are a number of reputed Sarode manufacturers in India. The most notable mention among them would be Mr Hemen Sen who designs and makes Sarode for almost all the renowned living Sarode players from Ali Akbar Khan to Amjad Ali Khan. Hemen Sen is a National Award winner of the Government of India for his excellence in Sarode making. Many Sarodiyas believe Sarodes manufactured by Hemen Sen to have the best sound quality. However Hemen Sen's Sarodes are costlier than Sarodes made by other manufacturers.

The lack of frets and the tension of the strings makes it very technically demanding to play, as the strings must be pressed hard against the fingerboard.