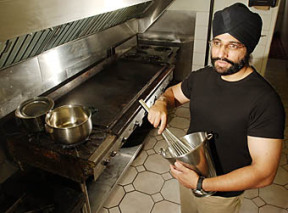 Jatinder Singh is the founder of Sikhcess, a group of Sikhs in Burnaby that prepares and distributes meals every month to the homeless in Vancouver's downtown eastside. They were recently honoured by Burnaby City Council

An eye-opening experience has a group of young Sikhs trying to make a difference for the region’s homeless.

Last January, the group had an idea to bring food to the needy in Vancouver’s poorest neighbourhood. “We thought, a couple hundred packages should be enough to take care of the Downtown Eastside,” said Jatinder Singh with a laugh at their naiveté.

When they saw first-hand that that was just a drop in the bucket, rather than be discouraged the group simply set their sights and goals higher. “It just evolved in that night to a much more aggressive goal,” he said.

The group, an offshoot of Sikhcess, a community organization that promotes the basic Sikh principles of public service, decided to commit to a minimum of one year during which they would distribute 15,000 to 20,000 food packages in the Downtown Eastside.

Six months into the campaign, they’ve already given out more than 12,000 packages – each consisting of a curried vegetable wrap, a dessert and a beverage – and are no longer limiting themselves to the Main and Hastings area. The next distribution is being planned for New Westminster on the July 21 weekend.

Singh, 40, is the founder of Sikhcess, and started the Feed the Homeless Campaign along with Nikki Bachu and Indy Panchi.

Sikhcess is not affiliated with any specific Sikh temples, but rather draws on the support of the entire Sikh community in its efforts, which were recognized by Burnaby city council earlier this week.

Singh said the campaign has enjoyed tremendous support from the Sikh community, with the temple in Queensborough, Gurdwara Sahib Sukh Sagar, so far sponsoring two food distribution nights, and the Ramgharia Sikh Temple in South Burnaby sponsoring one of the first that helped launch the campaign.

The campaign follows in the 500-year-old Sikh tradition of Langar, or “free kitchen,” in which people of all faiths, castes and backgrounds sit side by side in temples sharing a free vegetarian meal together. “It’s not an idea exclusive to us,” Singh said.

Temple members and other community volunteers roll up their sleeves to prepare the wraps and packages, which are then handed out by a group of 15 to 20.

Singh said typically when they first set up, a line of about 150 people forms, followed by another equally large queue. Then the group will walk the streets and alleyways looking for people who could use a free meal. If they find people that are passed out, “they wake up with a package of food in their bag or next to them.”

Singh, a Vancouver resident, said he’s been most impacted by the gratitude he sees from the food recipients, “grateful someone’s coming to help them with no strings attached.” One can’t help but almost be shamed into helping when recipients “express so much gratitude at what we think is such a small thing,” he added.

He noted that when he goes to the Downtown Eastside the day before a food distribution to get the word out, some people actually recognize him and ask if he’ll be feeding them again. It’s “rewarding,” he said, because “they’re not just taking and forgetting.”

In addition to that gratitude, organizers have been surprised “there’s almost a clamouring of Sikh organizations wanting to sponsor the events ... We can’t hold enough events to [meet the demand from sponsors].”

The campaign has enjoyed the support of anonymous corporate donors who contribute thousands of cans of pop or bottles of water.

Khalsa school in Surrey recently donated the food and volunteer time to allow for the distribution of 3,500 food packets in a single night.

The donations mean organizers don’t have to solicit monetary donations which would only complicate what they’re trying to do, Singh noted.

And then there’s the occasional volunteer who hears about what the Sikhcess group is doing and drops by to lend a hand.

Singh stressed that the campaign doesn’t have illusions of solving the often formidable problems that plague many homeless people, such as addictions, mental health and diseases such as HIV/AIDS and Hepatitis C. All they hope to do is offer some temporary relief.

In the greater scheme of things, “we’re hoping it has a copycat effect,” he said. “We realize how easy and simple it is to do. There are people out there who are terribly generous and willing to help the homeless if you just go out there and ask.

“If every community group did this we wouldn’t have nearly the social ills we do ... This is not a hard thing to do.”

Anyone wanting to help with the Sikhcess Feed the Homeless Campaign can call Jatinder Singh at 604-866-5432.