Do Seva in this world and reserve a seat in Heaven 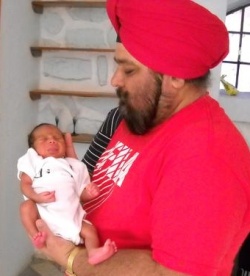 "Sewa karat hoye nehkami tis ko parapat hot swami". "One who performs Seva, without thought of reward, shall attain his Lord and Master."

My name is Dr. Pargat Singh Bhurji MD, FRCP(C.) I am a specialist in paediatrics and neonatology. I was trained at the prestigious University of British Columbia, Vancouver.

At the Children's Hospital I am the only turbaned Sikh Specialist.

It gives me great honour and privilege to be who I am. Most of the moral and spiritual values were instilled in me by my grandmother.

Five years ago I took the 4th medical team to Kalmuni, Sri Lanka to serve the paediatric needs after their devastating Tsunami. 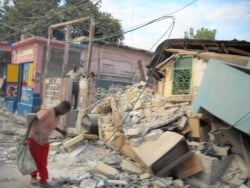 Those deaths could not have been prevented, but what we saw was an opportunity to prevent further deaths especially little babies and children.

When ever a major disaster happens, adults pull through because of their stronger body build and reserves.Children are the most affected. If we intervene early we can prevent death and morbidity.

With Guru Ji's kirpa I was chosen from the province of British Columbia to take the first medical team to Haiti, to set up the clinics and inpatients for newborn and children.

We started our journey from Vancouver to Dallas to Miami to Santo Domingo, on American Airlines. It took us 12 hours, then we boarded a bus to Port au Prince which took us an additional ten hours.

Arrival in the capital city

As we entered the capital city we saw tremendous destruction of houses, roads etc. and tents all around us.

The accommodation was very basic. A restaurant owner had closed his business and was helping doctors and nurses by letting us stay there. We paid him money for the basic food he provided.

I was successful in setting up paediatric and newborn care in tents in Diquini, St. Marc and Jackmel. These places are one to two hours drive from Port au Prince, their capital city, but are still considered to be part of Port au Prince.

We would see 200 plus sick children daily and admit more than ten every day. We did this daily non-stop for about three weeks. In addition, about 150 new babies were delivered during this period.

On my birthday in early February I saw a sick 34 week old baby who had recovered. His family wanted to name him Pargat, after me. This was the best ever birthday gift bestowed upon me by the Almighty!

We are sending teams every two to three weeks now and I am coordinating these teams. We will be on site there for one to two more years.

I am proud that the Sikhs of lower mainland in Vancouver raised 1.5 million dollars to help Haiti.

Recognise the human race as one

When I first went to see the patients in Diquini they were astonished and puzzled. They had never seen a Sikh before. When I told that I am from Vancouver, Canada they were even more puzzled.

They asked me a lot of questions about my hair, beard, Turban, Kara, etc. which I was able to answer logically and scientifically, a knowledge which I had received from the Sangat, from my discussions with Singh Sahib Bhai Harbhajan Singh Yogi Ji, Khalsa Men's Camp few years ago, and from other mahapurakhs and my Shabad Guru.

In few days time they all started calling me "Papa Bonjou, which in their local Creole language means "Father God."

The love, affection and bonding they provided to me cannot be described in words.

Humanity can transcend, language, colour, class and creed. I have seen it and experienced it myself.

Of all religions, the best religion is....

"Sagal Dharam mein Shresth Dharam, Har ko Naam jaap, Nirmal Karam" "Of all religions, the best religion is to chant the Name of the Lord and maintain pure conduct."

I have come back home now, but a major part of my heart is still there in Haiti.

I pray to Waheguru for their speedy recovery and to bring Haiti back on track soon, though the process could take many years.

Even though they have nothing left, they are strong-spirited people who are content and will pull themselves back up.

Our days there started around 5 AM and finished around 10 PM. At night, mosquitos troubled us and dogs barked, but by the following morning, after my Sadhana, I was recharged again.

No one can tell Your Glorious Virtues

And this would give me super energy!

I would like to encourage today's youth to keep performing seva or volunteer service as part of their daily routine.

When you help someone you get helped too. It is a dynamic bi-directional positive spiritual energy process.

Stop complaining about petty stuff and be content with what you have.

Attuned to the Naam, peace shall come

Our youth is our future and it is our duty to spend enough real quality time with them for their physical, emotional and spiritual well being.

Start in Dharam, with the discipline, seek gyaan to understand what Gurbani means, apply that it to your daily life. Fine tune your thoughts, emotions, beliefs and consciousness to pass through Saram khand, then Guru may do Kirpa on you at Karam khand and through that blessing you finally reach Sach khand vasy nirankaar kaar kaar vekhey nadar nihal.