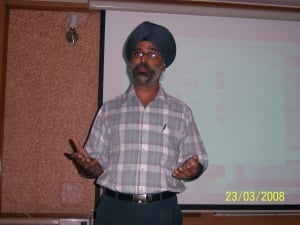 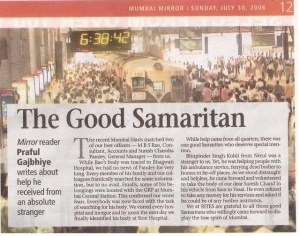 "The Good Samaritan" - a Newspaper article on the Mumbai train explosions, click to enlarge 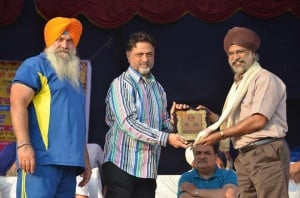 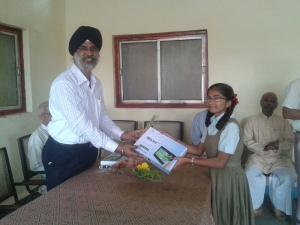 Bhupinder Singh Kohli is a Guru-panth-da-Sewadar extraordinaire based in Mumbai, India. He has been recognised as such several times by the local newspapers. He has a full time job like most of us, working as a banker for the State Bank of India where ke is a senior employee in the Estate Department of their Corporate Centre, New Administrative Building, CBD Belapur, in Mumbai. If you were to meet him at work, he would appear just like any ordinary executive pf the bank. However, there is something more than meets the eye at first glance. For in this unassuming, rather ordinary looking executive, beats the heart of an extraordinarily committed social worker.

Many of the local needy, including those in desperation 'bank' on Bhupinder with their hopes, aspirations, with regular requests for help. And he never disappoints them. There is never a "NO" in his dictionary when it comes to Sewa - Selfless service. He is always there for people in 'caught in the wilderness'. His mobile rings most often with requests for emergency help and he is always ready to arrange this with lightning speed; his private car is always available for the free ferrying of "his patients" for emergency hospital service. And this is just one facet of his personality. 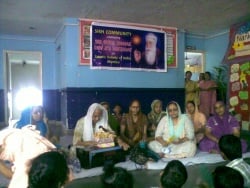 The Times of Navi Mumbai throws some light on the achievements of Joginder Kaur Kohli and her numerous achievements towards mankind.

The day-to-day life of 83-year-old ‘Gandhian' social worker Joginder Kaur Kohli from Nerul could easily be compared to that of a honey bee. Kohli was born on April 5, 1929, at Chakwal, in Pakistan, and then migrated to Patiala in Punjab after partition in 1947 and later to Mumbai in 1954, along with her husband Jagjit Singh Kohli.

Recalling their early struggle in life, says Joginder, “As we belonged to a lower middle class family and had lost every penny during those troubled years, we had to work very hard to meet our ends. It was really tough, because we had five sons and two daughters, who had to be fed and educated.”

The determined lady worked shoulder to shoulder with her husband to run a small tea stall, worked as a labourer in a factory in Bhandup and at the same time, helped the underprivileged whenever she got the time.

“More than providing education and food, what I really wanted my children to have are good values so that they could help the needy and underprivileged in society. I am glad that till date they follow what we have taught,” she says, proudly. Incidentally, her son Bhupinder Singh Kohli is also a well-known social worker from Nerul.

Having worked for a long time, it was time for her to settle down peacefully. However, fate had other plans.

Says Bhupinder, “It was a very sad phase in my mother’s life. My father, after suffering for 10 years due to Parkinson’s disease, passed away in 2005. At the same time, it was amazing to see my mother’s will power, where she was not only looking after my father’s all needs, but also pursuing what she likes the most - the social work. As a true Gandhian at heart and action, during that time also, she was spinning the charkha and was donating the bundles of thread to the leprosy home as raw material for their khadi attire.”

Joginder’s service to humanity doesn’t end here. She has formed a kirtan sangh, where ladies, most of them, senior citizens are members. They go to various charitable institutions, like the old age home to cheer them up and have peace of mind. Besides that, they also visit gurudwaras and the residences of people who invite them to sing kirtans.

Says Joginder, “When our group gets any amount as a token of respect from the latter, we use this money to get orphan girls married, to meet the medical expenses of the needy, organise socio- religious functions at the Spastic Society of India and many other charitable institutions.”

In addition to this, Joginder does the tedious work of collecting old and unused clothes, repairs with her own hand, washes, irons and sorts them according to gender and size wise, and distributes them to the needy in the above homes and remote areas. She further collects unused and unexpired medicines, sorts them alphabetically and supplies them to charitable dispensaries.

Informs Kohli, “My mother is averse to giving publicity to her work. However, a few organisations, like the Gandhi Ashram at Ahmedabad and Duttatrey trust, Nerul, wanted to honour her and her various endeavours.”

Over the successive waves of Covid-induced pandemic, the concomitant conditions of lockdown, isolation, quarantine, containment, confinement and continued disruption of daily routine have affected mental health of people in very large numbers, lowered motivation and morale of workers and managers alike, and even caused chronic stress. After all, corona has been a collective trauma, aggravated by job losses, fear psychosis, hopelessness,all-round negativity, and the spectre of the dead and dying. ENDEAVOUR BY BKK MEMORIAL FOUNDATION

‎HONOURED WITH PRIDE OF INDIA AWARD AND SESSION ON "BEYOND EVERYDAY LIFE" AT INDORE, MADHYA PRADESH (INDIA) 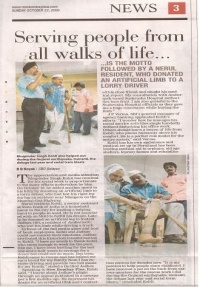 "Serving people from all walks of life..." - another Newspaper article - click to enlarge

In addition to this free ambulance service, he has a range of other community based social activities, a few of which are listed below:

His untiring enthusiasm for social work and his organisational abilities are inspirational, today people of all ages rush to join him in his social activities. And he doesn't disappoint them as he welcomes any kind of support offered and guides such support to further serve social causes.

And thus the circle widens. As they say "Jyot Se Jyot Jalathe Chalo", the light of kindness is spreading... Carry on Mr. Kohli. you are making all of us proud.

Working for the poor, the needy and the helpless is more than just a hobby for Kohli. Apart from his busy schedule of a bank job he is immersed in social work and constantly attempts to find out solutions to the problems of the helpless, in his own unique ways. Nine years back, Kohli started his journey with collecting unused and not expired medicines as well as free samples given by doctors. The medicines collected were sent to charitable dispensaries. He also collects equipment, such as walking sticks, saline stands and oxygen cylinders. He sterilizes them and gives them to the poor or needy patients. He has put together a computerised compilation of the blood group directory, which has a list of around 4,800 donors' names and addresses that were collected individually.

KARSEWA -The Times of India

The following article appeared in the Times of India edition on 5th August,2004. It is a grand testimony to Bhupinder Singh's great work of the community. The text of the article is produced below:

"Working for the poor, the downtrodden the needy and the helpless is more than just a hobby for Bhupinder Singh Kohli from Nerul. It is a daily ritual. Apart from his busy schedule as an employee of the State Bank of India at CBD Belapur and in between taking care of his parents, particularly his 92-year-old bed-ridden father, Kohli is immersed in social work and constantly attempts to find solutions to the problems of the helpless in his own unique ways.

Kohli's latest idea has been to convert his own Santro Car to a vehicle for people in distress. Explains Kohli, "Four months back, I happened to see an accident near Uran Phata at around 7 pm. The victim was fatally wounded but he could reach the hospital only after precious time had lapsed, for want of timely ambulance services. This incident made me think of alternative sources to help people in distress.

And that very night, I realised that I had one of these sources with me. I could help with my new car which I'd been using sparingly. I decided to use the car in emergencies for shifting patients from or to hospitals, free of cost. " The very next day, Kohli sprung into action and inscribed 'FREE HOSPITAL SERVICE WITHIN NAVI MUMBAI DURING THE NIGHT' on his car.

During the next three months, he helped seven patients to reach the hospital during medical emergencies. As appreciation for his dedication, the Vashi Gurudwara presented Kohli with a second hand ambulance. Pointing out the difference that the generous gift would make, Kohli remarked, "Though my car would serve the purpose of dropping patient to the hospital, proper medical equipment is not available inside the car. Now, with the ambulance service available, I'm sure more lives will be saved." This ambulance service too comes at no cost. 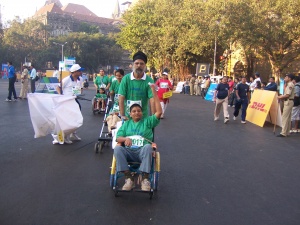 This devout Sikh has taken seven first-aid courses in various hospitals across Mumbai and Navi Mumbai. Says Kohli, "When I was studying, I happened to see many rich patients dumping expensive medicines, which were not past their expiry date, after they recovered from their illness. These medicines would have otherwise served poor patients."

From then on, Kohli started collecting unused and un-expired medicines as well as free samples given by doctors. The medicines collected thus were sent to charitable dispensaries. Kohli also collects used equipment, such as walking sticks, saline stands and oxygen cylinders, among others; he sterilises them and gives them to poor patients. He also collects old and usable clothes, utensils, reading materials and toys for needy people in villages.

The jewel in the crown of Kohli's social work is his mammoth compilation of a computerised Blood Group Directory that has a list of around 4,800 donors' names and addresses, collected individually. This social worker, who is responsible for organising many medical camps, is also a member of Civil Defence, Red Cross Society and Traffic Wardens.

Says Kohli's friend Hardeep Singh, "For the last 20 years, he has been meeting all the expenditure of his social activities from his own income. The Santro manufacturers should be proud of Kohli for using their product for a noble service."

Newspaper cuttings and other articles in the news

Pictures of other Charitable Events 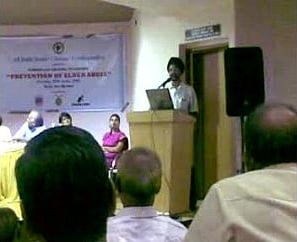 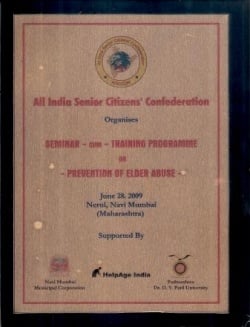 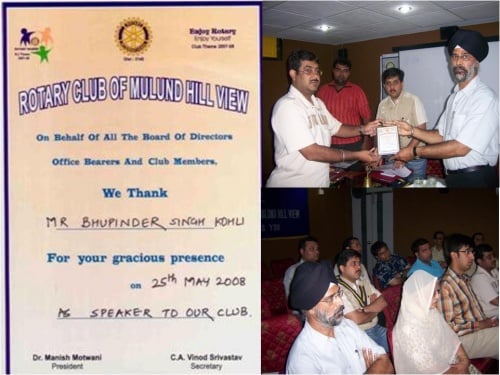 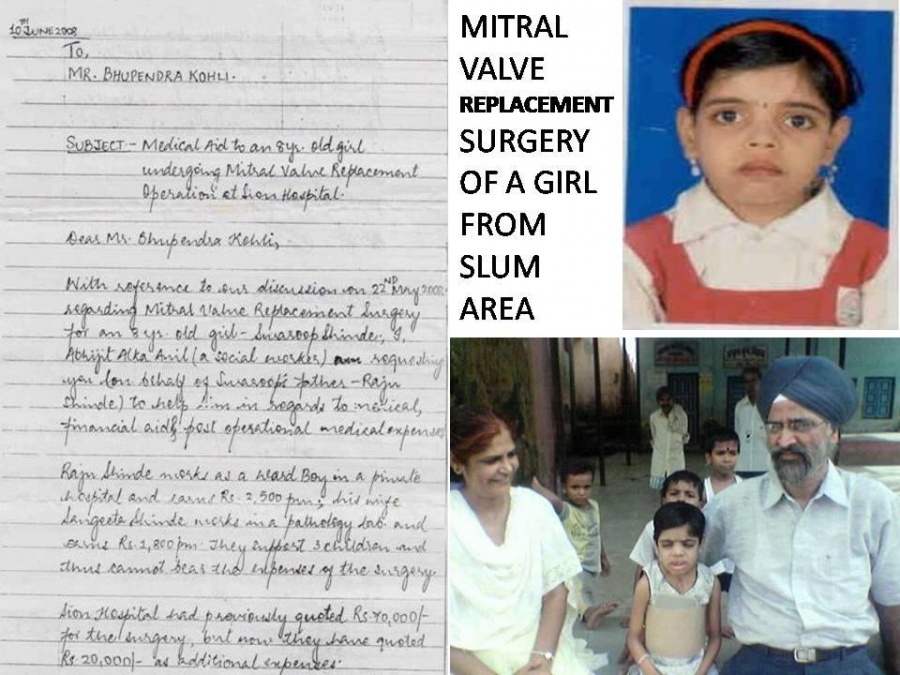 (MITRAL VALVE REPLACEMENT SURGERY OF A GIRL FROM SLUM)