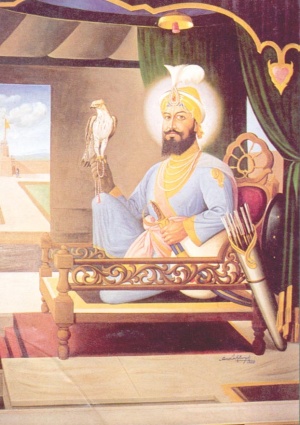 Chitta Baz, (White Falcon), is traditionally the name given to one of Guru Gobind Singh`s favourite falcons that he would carry perched on his hand when going out for on a Shikar (hunt) or for some falconry. This image of the Guru the white falcon resting upon his right hand has survived in folklore and in portraiture, and he is known to this day as chittian bajanvala, Master of the White Hawk.

Guru Gobind Singh Ji, the tenth master of the Sikhs, has had many titles bestowed upon him, one of the most beautiful was ‘Chittay baaja wala” or Chittian Bajanvala), the keeper of the white falcon. To infuse his Sikhs with worth and valour the Tenth Guru conducted his affairs as a Emperor, infact another title for Guru Gobind Singh Ji is “shah–hay–shehanshah”, the Shah (King) of all Shahs. Guru Ji held darbar (court) where he met with Rajas and emperors as well as the poor and needy. Guru Ji conducted his affairs fully armed (shastardhari) and sat on the Takhat (Throne). The image of Guru Ji with a sword, a quiver of arrows and his shield draped at his side, with a Kalgi (royal plume) decorating his turban while holding the white bird of prey is a very potent image; one that is etched into the minds of all devoted Sikhs.

The few places the bird of prey is mentioned historically the word used ‘baaj’ and most strikingly – the colour of the falcon was white. The word Baaj is sanskrit in origin and mostly it is agreed that it refers to a falcon as opposed to a hawk or an osprey. The peregrine falcon first springs to mind but one would not describe it as predominantly white. If the historical anecdotes are to be believed then it is most likely that the 'white bird of prey' which the 10th Guru handled was either a Gyrfalcon or Saker Falcon. The possibility also exits that it was just a rare (totally white) falcon, like the rare white elephants so valued in Asia.

The Gryfalcon is the only 'regularly white falcon' that exists, it's also the largest of the falcons and would have been a very prized possession during the seventeenth century especially in Asia. This is because it would have been a valuable commodity for dignitaries and rich individuals to bring and sell to royalty in India and South East Asia. The Gyrfalcon is the largest and most magnificent of the falco genus. In the most northerly part of its range it is almost uniformly white, becoming darker as it moves further south. With a wingspan of up to 63" (160 cm) and a body weight of up to 4.6 lb (2.1kg) it is indeed an impressive and powerful bird. Its preferred terrain is invariably open country, mountains or tundra.The gyrfalcon's diet is mainly birds. Chief among these is the Arctic Ptarmigan, although sea and water birds, including large ducks and geese do feature. The prey is normally taken on the wing, although ground catches are not uncommon.

The Saker falcon (also known as Falco Cherrug or Steppe Saker) originates from northern Russia and has a special place in Mongoloid culture. It is larger then a peregrine falcon and has a wide wing span for its size. The saker falcon has a range of colour, from dark grey, brown, to almost white. Saker falcons are also thought to breed with gyrfalcons and form a hybrid. They have been used as reliable and fast messengers to deliver letters, and were given as special gifts to khans (kings) and rulers of other countries, but were most commonly used in hunting. The whitest phase of this species occurs in the colder reaches of northern Asia.

The Saker is one of the largest Falcon species, and related to the Gyrfalcon. There are a number of colour-phases, ranging from very pale to very dark plumage. In the field they can be difficult to distinguish between Lanner and Lugger Falcons. Their larger size is generally a good indicator. The Saker is a widespread species that ranges from Eastern Europe, across the northern parts of central Asia, to the Russian far east, China and Mongolia. They can exist at very high altitudes, with nests being recorded at 5200m above sea level. Sakers are mainly a bird of the plains and steppes. Some populations show strong migratory tendencies. The diet of the Saker changes in various parts of its range. In northern Eurasia, they regularly predate small to medium sized rodents, such as Sousliks (a ground squirrel), Pikas (a small rabbit-like mammal) and Lemmings. Birds such as doves and starlings will also be taken. Sakers are also known to steal food from other raptors

It is because of these birds rarity that they would have been in extremely huge demand by emperors and kings in South East Asia and one born totally white would be the most prized of all. What more befitting a bird for Guru Gobind Singh Ji to handle as his favourite.

The baaj features in a number of stories relating to the Guru. Once Guru Gobind Singh Ji was in the forest and he let the baaj fly off towards a small animal scurrying about in the undergrowth. The baaj caught the animal and flew back to the Guru. It tore at the animal and fed on it. The accompanying Sikhs were taken aback by this incident and asked Guru Ji to explain. “In a previous time the baaj and this animal were friends. The one who is now dead asked for a loan and swearing on the Almightys name said that he would pay it back. He was devious and never did return it, so this is payback time.” In this incident Guru Ji enlightened his Sikhs that if you take something that is not yours or promise to return it then you will be held to that promise no matter what.

The most significant story concerning the baaj is in 1699 when Guru Sahib Ji used his Khanda to stir the Amrit (holy nectar). As he was about to initiate the Panj Piares, a few drops of amrit that had fallen from the iron cauldron, were readily consumed by a few sparrows. The sparrows suddenly turned on the baaj and repeatedly assaulted him to such an extent that he had to take flight, followed vigorously by the sparrows. This incident showed the Sikhs that the amrit created by the Tenth Guru had immense power, after drinking a few drops a small sparrow not only had the courage to take on a bird of prey but to harass it until it took flight and fled. Guru Gobind Singh Ji said “I will create my Khalsa of such courage and vigour that he will take on armies of the enemy, he will stand up for the poor and the downtrodden – Sava Lakh say ek ladaho (One will confront a lakh and a quarter of the enemy).”

And more recently in 1984 amongst the turmoil and terrible fate of so many Sikhs a white baaj appeared, seen by many it circled and perched on a branch, telling the Sikhs that the Guru was with them. From time to time a white baaj is seen in the mountains of the Himalayas in the surrounding areas of Hemkund Sahib where Guru Gobind Singh Ji performed much hard meditation to merge with the Almighty.