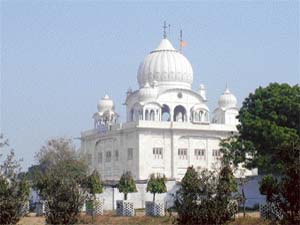 Gurdwara Majnu-ka-Tilla is situated on the right bank of river Yamuna, opposite Timarpur Colony beyond the Khyber Pass section of Delhi, India. The birthday of the Khalsa is celebrated here with much festivity on Baisakhi day. On this day, which holds a special place in the hearts of all Sikhs, the city swells with pilgrims from the surrounding areas. With many people of different creeds, castes, and status join the Sikhs of Delhi. During the festivities a special langar (a free kitchen or meal) of enormous size is arranged.

The historic name of area, literally means the hillock of Majnu, after the tilla or mound where during the reign of Sikandar Lodhi (r. 1489–1517) on Delhi Sultanate, a local Iranian Sufi mystic, Abdulla nicknamed Majnu (crazy), met Sikh Guru, Guru Nanak on July 20, 1505. Majnu ferried people across the Yamuna river for free as a service to God, his devotion resulted in the Nanak staying here till end July. In later history Sikh military leader Baghel Singh built the Majnu ka Tila Gurudwara to commemorate the stay in 1783, and the sixth Sikh guru, Guru Har Gobind also stayed here. Today it is one of oldest extant Sikh shrines in Delhi and the surrounding estate of donated by early 19th-century Sikh emperor, Ranjit Singh.

It is said that a Muslim hermit had camped here on a small hill at the edge of the Yamuna during the rule of Sultan Sikander Shah Lodhi. Fasting, the Sufi mendicant had become very thin. Lost in his thoughts he sat in meditation day after day, yearning for a glimpse of God. He was so oblivious to the world around him that people started referring to him as "Majnu" (crazy), the nickname that the Persians had given to a young man whose never ending love of a girl (Lali) became symbolic of the intense mysticical love for God of Sufi literature. The Yamuna's Majnu, when not lost in meditation, would use his small boat to ferry people across the Yamuna for free.

One day Guru Nanak, walking by the river, came upon Majnu and gave the emaciated hermit his blessings. Attaining the enlightenment he had so long sought, Majnu became a devout disciple of the great Guru. While Guru Nanak was camping atop this hillock many Sufi saints of Delhi came to meet with Guruji and held spiritual discussions with him. The most prominent among those who came to pay homage to the Guru was the sajjada nashin (spiritual leader) of the shrine of Hazrat Nizamuddin Aulia who left his talk with Guru Nanak deeply influenced. Many people were attracted to the site by Majnu's divine personality. Infact, his radiant spirit and dedicated love for his Guru, made this shrine into an outstanding missionary centre for centuries to follow.

It is said that after Guru Nanak Dev had blessed Majnu, he became so pleased with Majnu's dedication that he told his new devotee, "your name will be immortalized". So in sacred memory of this once Muslim Saint the shrine was named Gurdwara Majnu-Ka-Tilla (the hillock of Majnu).

Years later, after the torture and death of his father, when Guru Hargobind was 'invited' to Delhi by Emperor Jahangir, he stayed at Gurdwara Majnu-Ka-Tilla. During his stay he became friends with the Emperor. Later he joined the Emperor's shikars (hunts) and even saved Jahangir from a tiger's attack. When an influential friend of the gravely ill Emperor had the Court Astrologers to suggest to the Emperor to ask his new friend to go to Gwalior Fort to pray for his recovery, Guru Hargobind gladly agreed. When he was released and asked to return to Delhi, Guru ji refused to leave the fort insisting that 52 Hindu prisoners also be set free. Today the event is celebrated as Bandi Chhor Divas. Leaving Delhi, on his way back to the Punjab, Guru ji again visited the hilltop, Majnu-Ka-Tilla, where his fifth predeccesor had stopped to bless Majnu the 'crazy' Sufi who had yearned for, the seemingly unattainable, love of the Kartar (God).

Guru Hargobind's dynamic personality filled the Sikhs with a revolutionary spirit turning them into saviours of dharma and righteousness. He emboldened his followers morally, mentally, and physically to fight the evil designs of the Mughal rulers who were seeking to annihilate the rich cultural heritage of India. With his two swords of 'Miri and Piri' (spiritual and temporal power), a combination of Bhakii and Shakti, Guru Hargobind created warrior saints, to fight against tyranny and oppression. Guru Hargobind's ideology shattered the designs of the ferengi (foreign) rulers and helped to change the course of India's history from slavery to self respect and dignity. Having militarised the Sikhs Guru Hargobind laid the foundation of the Akal Takht just opposite the Harmandir Sahib. It is from the Akal Takht that all the hukamnamas, (religious decrees) are issued to the Sikhs. These decrees are binding on all members of the Sikh community. The Akal Takht has served as a unifying force and a rallying centre for Sikhs during their history's turbulent times.

When Guru Har Rai the seventh Guru sent his son Ram Rai to explain the tenets of Sikhism to Emperor Aurangzeb, he also stayed at Majnu-Ka-Tilla.

There is a well in the compound of this holy shrine. It is said that Ram Rai showed his miracles to Aurangzeb near this well.

It is also said that 'General Baghel Singh' who conquered Delhi in 1783 and held it under his sway for a few months, also encamped at Majnu-­Ka-Tilla. According to records i twas wassthe General Baghel Singh who raised a small structure at this sacred place to perpetuate the memory of the Sikh Gurus.

The tiny, old marble Gurdwara which exists even today, was constructed by Maharaja Ranjit Singh who also endowed it with a jagir. The income from this jagir was spent on the maintenance of this historical shrine.

In 1950 a big Gurdwara building was constructed by the sangat of Delhi. This Majestic Gurdwara is situated on the right bank of the River Yamuna on the Grand Trunk Road (National Highway-1), opposite Timarpur, Delhi.

These gallery pictures are with thanks to: Sifar. Click on the photo to enlarge.