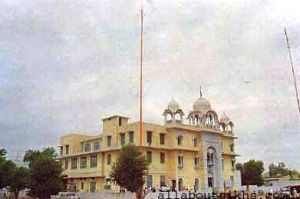 Gurdwara Bala Sahib is one of the most important Sikh shrines in Delhi, next in importance to Gurdwara Sis Ganj and Gurdwara Bangla Sahib. Large number of Sikhs and Hindus visit this holy place daily. This Gurdwara is associated with the eighth Guru Sri Harkrishan Sahib ji and two wives of Guru Gobind Singh namely Mata Sundri ji and Mata Sahib Kaur ji.

During his stay in Delhi, Guru Harkrishan Sahib won the hearts of a large number of admirers by applying healing touch on ailing bodies. He cured hundreds of people, suffering from acute attack of cholera and smallpox. For Sikhs of Delhi, his very presence amidst them, had a very healthy impact. For them the Guru was the boat of salvation, a ladder to reach one's ultimate home, a key to open the lock,a unifier of man with God and so on. In fact for Sikhs a Guru is indispensable, yet he is not an end in himself, but only a means for the attainment of salvation.

The Guru in Delhi

So they were all happy to be in close association of their spiritual preceptor. But their joy was short-lived as he soon, left for his heavenly abode. During his stay in Delhi as guest of Raja Jai Singh, Guru Harkrishan performed the humane miracle of healing and giving solace to the poor and the sick.

In fact the noble deeds of serving the suffering humanity won him more adherents than any other religious leader living in Delhi at that time. Even Muslims respected him greatly for the radiant peace and the hope his serene personality reflected. As if he had taken the burden and sufferings of others on his own shoulders, he himself got a severe attack of smallpox and died on March 30, 1684.

Earlier, he had shifted from the bungalow of Raja Jai Singh to the bank of river Yamuna. He was cremated at the same spot where Gurdwara Bala Sahib has been raised. This shrine is situated on the ring road on the other side of Maharani Bagh Colony. The Gurdwara is no longer on the bank of the river as Yamuna has since changed its course.

Gurdwara Bala Sahib is also sacred because Mata Sundri and Mata Sahib Kaur were also cremated there. The samadhi of Mata Sahib Kaur, a small marble room, is in the main hall of the Gurdwara, whereas that of Mata Sundri is outside the new Gurdwara building.

Both old and new buildings of the Gurdwara are situated side by side. The new building has a big hall and it was completed in 1957-58.

Sikh leader at a young age

Guru Harkrishan was called upon to lead the Sikhs at a very crucial juncture. He was nominated as successor by the seventh Guru Sri Har Rai in 1661 A.D. in preference to his elder brother Ram Rai who was a favourite at the court of Aurangzeb. The latter complained to the Emperor against the decision of his father who ignored his claims to Gurugadi. Consequently Bala Guru (the child Guru) was summoned to Delhi by the Emperor.

At first the Guru refused to oblige but later agreed to come at the intervention of Raja Jai Singh of Amber. The Raja sent high official to bring the Guru. He was received with full honour. The Raja persuaded the Emperor to leave the choice, of their spiritual leader to the Sikhs themselves and a deputation of the Sikhs made it clear to him that their choice was Guru Harkrishan Aurangzeb was however, anxious to meet Guru Harkrishan and Raja Jai Singh promised to arrange a meeting between them. But due to sudden demise of Guru this meeting could not be held.

According to historical record when Guru Harkrishan was about to die, his devotees asked him to name his successor. He uttered the words 'Baba Bakala'. Bakala is a small village on the bank of river Beas in Amritsar District, where Tegh Bahadtir the younger brother of his grandfather Baba Gurditta lived. The Sikhs went to Bakala village and acknowledged Guru Tegh Bahadur as their ninth Guru. The Sikhs of Delhi have constructed a magnificent Gurdwara Bala Sahib to perpetuate his memory.