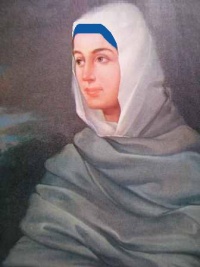 When Guru Gobind Singh Ji traveled to the Deccan his wife Mata Sundri Ji and Mata Sahib Kaur Ji, the mother of the Khalsa, came to Delhi and stayed for some time at the Haveli of Bhai Jawahar Singh at the Turkman Gate. Later Mata Sundri Ji stayed at the Gurdwara till she breathed her last. It was during her stay at this Gurdwara that Mata sundri Ji appointed Bhai Mani Singh ji as Granthi (head Priest) of Sri Darbar Sahib—the Golden Temple AMRITSAR. 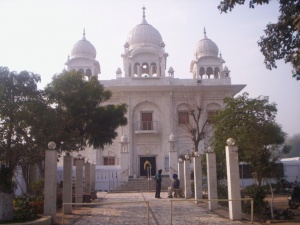 This Gurdwara is located behind Maulana Azad Medical College, near Turkman Gate Delhi. 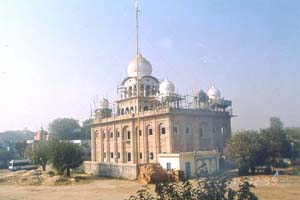 Gurdwara Mata Sundri is situated behind J.P. Nayak Hospital, adjoining the Ghalib Urdu Academy. The Delhi Gurdwara Committee constructed an imposing shrine on the site of the Haveli, where Mata Sundri, wife of Guru Gobind Singh stayed, after his departure to Deccan. According to historical records, Mata Sundri and Mata Sahib Kaur stayed for many years in Kucha Dilwali Singh near Ajmeri Gate. They were attended to by Bhai Nand Lal who worked as Mir Munshi to Prince Muazzam--Emperor Bahadur Shah. Besides, Bhai Kirpal Chand maternal uncle of the tenth Guru, and Bhai Sahib Singh, brother of Mata Sahib Kaur, also looked after them.

According to one tradition they both accompanied Guruji to the South but were sent back to Delhi just before his death. When Mata Sahib Kaur asked for a gift Guruji handed over to her his five weapons-one sword, one khanda (double edged sword), one khanjar (Poniard) and two katars (daggers). She was also made the eternal mother of the Khalsa. Every Sikh even today reveres her as true mother. Along with Mata Sundari, Mata Sahib Kaur was also authorised by him to use his seal on the hukamnamas issued for the guidance of the Sikh community. Guru Gobind Singh considered Delhi as a safer place. Consequently he made proper arrangements for stay of his two wives in the Mughal capital. Probably improvement of relationship with Emperor Bahadur Shah whom he helped in the battle of succession prompted him to keep them in Delhi. As a gesture of goodwill Emperor Bahadur Shah arranged a grand reception in honour of the great Guru near Humayun's Tomb, where Gurdwara Dam Dama Sahib was constructed to commemorate the event.

But Guru Gobind Singh was certainly not happy with Emperor Aurangzeb under whose orders Nawab Wazir Khan, Governor of Sirhind, tried his utmost to trap him in Punjab. His feelings are truly evident in letter which the Guru addressed to him. This letter written in lucid Persian poetry is known as Zafarnama, meaning letter of victory. Perhaps it was written in reply to some letters of Emperor Aurangzeb showing his genuine repentance. He also urged the Guru to meet him in Deccan. Guru Gobind Singh wrote, "He (Guru) who trusted, your oath on the Koran, taken with God as witness, was graciously protected by the same God. Not a hair of my body was touched. No injury whatsoever came to my body. God protected me even when I left the hillock (fort Anandpur) in the thick of night fighting my way out. You are neither sincere in your faith nor do you even practise the virtues of your religion."

In spite of such bitter feelings against Emperor Aurangzeb, the Guru helped his son Prince Muazzam, in the battle of succession as he considered him the rightful heir-apparent. The Guru had no ill will against Emperor Bahadur Shah despite the fact that his ancestors had been directly responsible for the persecution and execution of the Guru's ancestors.

Besides, it is reported in official records that the grateful Emperor had promised to punish guilty officials of Punjab who committed heinous crimes and were responsible for creating trouble for the Guru. He also marked the place where his father the ninth Sikh Guru Sri Tegh Bahadur was executed on the orders of Emperor Aurangzeb. He also visited the place. where in Raisina village 'the headless body of Guru Tegh Bahadur was cremated by a devoted Sikh Bhai Lakhi Shah Banjara. After the death of Guru Gobind Singh in Nanded (Maharashtra) the Khalsa Panth held Mata Sundri in great esteem and followed her instructions. She sent hukamnama to Sikhs of Punjab during her stay in Delhi. She deputed Bhai Mani Singh to Amritsar as head priest of the Golden Temple. 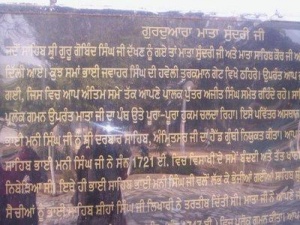 It was Mata Sundri who looked after Sardar Jassa Singh Ahluwalia during his childhood. Later, he sent him to Punjab to serve under Nawab Kapur Singh, the then leader of the Dal Khalsa. By the blessings of Mata Sundri, Sardar Jassa Singh Ahluwalia achieved great distinctions as a warrior and made victories against the Afghans and Mughal armies. He conquered Lahore and minted his own coins. Mata Sundri expired in 1747 A.D. while Mata Sahib Kaur died a year or two later. The samadhis of both of them were constructed on the river bank where Gurdwara Bala Sahib stands today. After the death of Mata Sahib Kaur the Guru's weapons were preserved by Bhai Jiwan Singh and his descendants in their house in 'Chitli Kabar Mohalla' of Matya Bazar. Some of these weapons are now kept in Gurdwara Mata Sundri. The martyrdom day of Guru Gobind Singh's sons is observed here every year by Sikhs of Delhi with great devotion and dedication. This holy shrine is serving the citizens of Delhi without distinction of caste and creed, as a fount of learning and dissemination of moral and spiritual teachings.