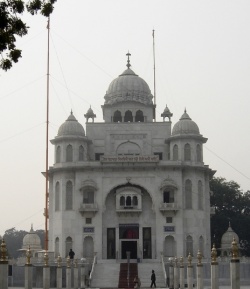 Rakab Ganj Sahib is an important historic Gurdwara in Delhi, India. It’s located at the exact spot where Dhan Sri Guru Tegh Bahadur's headless body was cremated after the Mughal executioner, Jalaudin of Samana, beheaded the ninth Guru of the Sikhs on November 11, 1675.

In order to awaken the conciousness of the masses and to focus the minds of the nation's elite, the ninth Sikh Guru volunteered to lay down his life so that the atrocities of the cruel Mughal empire could be thrown into the forefront of issues that were deemed important for the country at the time. Consequently, the execution of the Guru in 1675 spelt the beginning of the end of the Mughal empire.

Two brave Sikhs of the Guru, Bhai Lakhi Shah Banjara and his son, Bhai Naghaiya rescued the headless body of the revered ninth Sikh Guru from Chandni Chowk, Delhi after the execution of the Guru.

Guru ji's body was rescued by these two with a convoy of several ox-driven carts carrying bales of cotton and foodstuffs. Due to the strong dust storm, these brave Sikhs managed to lift the body of the Guru without the Mughal guards discovering what was going on.

These two Sikhs were able to lift the body with great speed under the cover of the storm and then conceal the body in the cart under bales of cotton. They then quickly moved towards Raisina village, the place where they lived. On reaching their abode they were able to avoid any suspicion by the authorities since Bhai Lakhi Shah Banjara placed the body on a bed and set fire to his whole house.

This place came to be known as Rakab Ganj. This tragic death of the Guru and his dedicated companions took place on November 11, 1675 under orders of the Mughal Emperor Aurangzeb. Another devoted Sikh, Bhai Jaita took the Guru ji's head to Anandpur Sahib, 500Km (300 miles) away from Sis Ganj, Chandni Chowk.

The present location of the magnificent Gurdwara is on the Pant Road in New Delhi, facing Parliament House and North Block of Central Secretariat. The modern building is composed mainly of white marble surrounded by a beautiful garden. Like most other Sikh shrines this Gurdwara has entrances from four sides symbolising that they are open to all without any distinction of caste or creed. This historical Gurdwara was built at a cost of 25 lakh rupees and took 12 years to complete.

Historical records show that Sardar Baghel Singh, constructed a Gurdwara in village Raisina in 1783 to perpetuate the memory of the ninth Guru Sri Tegh Bahadur. He had conquered Delhi by leading an army of 30,000 Sikh warriors along with four other commanders. Before 1783, the Muslims of Delhi had built a mosque on this very spot. The Sikhs claimed this spot as their own sacred place in memory of the sacrifice to their Guru. Muslims contested the claim, and there was strong objection to the dismantling of the Mosque.

Rival parties stood with swords drawn and the atmosphere was tense - anything could have happened. However, the Sikhs offered to reconstruct the mosque for the Muslims with their own expense in case the urn containing the ashes of the respected Guru was not found buried beneath the Mosque that stood there. This helped calm the atmosphere and tempers cooled down. The excavation work commenced in the presence of the Mughal officials.

The assertion made by the Sikhs proved to be correct and they were allowed to construct Gurdwara Rakab Ganj by Emperor Shah Alam II. He also granted two Sanads to Sikhs. One Sanad granted permission to S. Bhagel Singh to take possession of the land for construction of a Gurdwara and a garden. By the second Sanad, the Emperor also gifted 101 bighas and 5 biswas pukhta equal to about 63 acres with 3 wells land, revenue free. Sikh forces agreed to withdraw from Delhi territory peacefully after the construction of their religious shrines in the Mughal capital in lieu of these concessions.