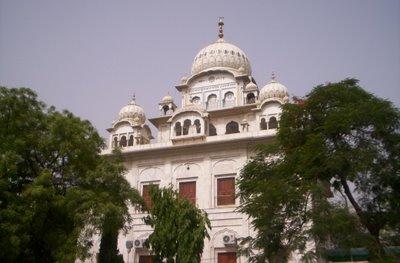 This gurdwara is associated with the Tenth Guru, Shri Guru Gobind Singh ji. It commemorates his meeting in 1707 with Prince Muazzam, later Emperor Bahadur Shah. He had been requested by the Prince for help in his battle for succession for the throne with his brother, after the death of Aurangzeb. Guru Sahib met the Prince at this place and together, they drew up their strategy. They watched elephant and bull fights organized for their entertainment.

Some notes, it is true, are to be found in historical documents pertaining to the visit of Guru Gobind Singh to Delhi at the request of Prince who had then already declared himself as Emperor of India. Though all such references are too brief to convey any adequate idea of the relations subsisting between the Guru and the Mughal Prince, there is no lack of material for reconstructing the background history pertaining to the important events which took place in the neighbourhood of Humayun's Tomb in those days of stress and strain.

Here on the bank of Yamuna near the Humayun Tomb, the two had a historic meeting and planned the strategy for the battle of succession. Later at that place a shrine which is now known as Gurdwara Dam Dama Sahib was built. As to why this place was selected in preference to Red Fort for the crucial meeting, no clue is available in official records. But keeping in view the importance and the high status of the personalities involved in the top level secret discussion a secluded place was selected amidst a thick jungle on the river bank. Accordingly the Prince came all the way to Humayun's Tomb from the Laal Killa (Red Fort) and encamped there, whereas the Guru moved from Gurdwara Moti Bagh and encamped at a vacant place adjacent to the rear of the Tomb.

On arrival at the site, Guru Gobind Singh was presented a guard of honour by a contingent of Mughal army. He was received with great respect and felicitations by the Prince Muazzam who presented many gifts to the Guru. Credit must be given to the Guru, who forgetting all the persecutions to which his ancestors and he himself had been subjected by the previous Mughal Emperors - Aurangzeb in particular, who agreed to help Prince Muazzam in the war of succession as his cause was just. So good hearted was the Great Guru that he gladly visited Delhi to help the rightful heir apparent Prince Muazzam. For an astute politician the chaos and confusion after Aurangzeb's death would have been a rare opportunity. But Guru Gobind Singh refused to exploit the situation and harass the prince for the sins of his father and forefathers. 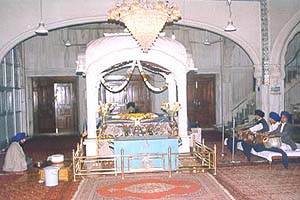 While Muazzam and the Guru were planning for the capture of Agra, Prince Azam reached Gwalior on June 2. The two armies met at Jajau on June 8. According to a Punjab historical document Guruji first sent his regiment commander Kuldip Singh with an army unit and when the battle was raging fiercely, he himself entered the fray and the fighting became stormy and reached a decisive phase. Bider Bakhat the brave son of Azam was killed. Prince Azam himself also got a fatal blow and died in the battlefield. Muazzam won a great victory that made him the undisputed Emperor of India. He personally thanked Guru Gobind Singh in many ways and also offered a khilat (robe of honour) to Kuldip Singh who covered himself with great distinction in battle of Jajau, According to historian Dr Trilochan Singh, the Emperor sent jewels worth Rs. 5 lakh to Mata Sundri as a present. The king was indeed impressed by the heroic deeds and the dexterity of the Sikh warriors. Thus the agreement effected between the Mughal Emperor and Guruji proved fruitful and the throne of Delhi was won over by the rightful claimant.

Gurdwara Damdama Sahib (place of rest) was first built by Sardar Bhagel Singh in 1783, when a huge Sikh army under his command conquered Delhi. At first it was a small Gurdwara. Later Maharaja Ranjit Singh deputed his officials to renovate it. Consequently a deorhi was constructed. Besides, some other buildings for priests and pilgrims were also added. In 1984 a new building was constructed. Every year thousands of devotees assemble here to celebrate the festival called Hola Mohalla. 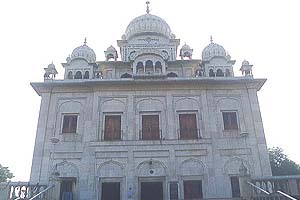