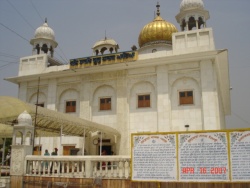 Gurdwara Nanak Piao is a historic Gurdwara located in north Delhi in India. This Gurdwara sahib is dedicated to the first Sikh Guru, Sri Guru Nanak Dev. Gurdwara Nanak Piao was built at the site, in the garden where Guru Nanak Dev camped when he visited Delhi in 1505 during the reign of Sultan Sikander Shah Lodhi. It is situated on Rana Pratap Road (also known as Grand Trunk Road or GT Road). It is said that people flocked to the revered prophet and offered him and Bhai Mardana precious gifts and offerings. Guru Nanak used to distribute all these offerings to the poor and needy. Besides this, he used to offer food and water to the hungry and thirsty, hence the name of the shrine. The word "Piao" mean to "offer liquid to drink" and refers to the offering of water to all the thirsty who visited this shrine. 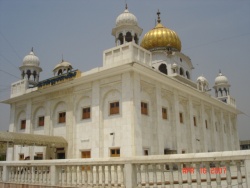 This is the Side View of the Gurdwara (from North East Side).

Even today, the well used by the Guru is preserved and one can still see the well from which Guru Nanak served water at the shrine. Consequently, over time Gurdwara Nanak Piao attained a status of a holy and revered historical shrine. Guru Nanak was an apostle of peace, brotherhood, non-violence and amity. His sermons created very uplifting and healthy impact on the people who bowed before him as respect for his spiritual guidance. The garden surrounding the Gurdwara became a place of pilgrimage for the people from all over Delhi. This is where they received the message of spiritual deliverance.

A story goes that during his stay in Delhi, rumours spread that Guru Nanak by the grace of God had revived a dead elephant. Emperor Sikander Shah Lodhi came to know about this holy man who had won the admiration of all the Hindu and Muslim divines of Delhi and had brought a dead elephant to life. It is said that when one of his favourite royal elephants died, he sent for the Guru and requested him to revive his elephant too. 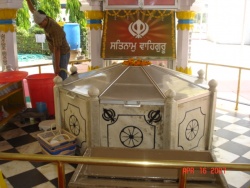 This is the well where Sri Guru Nanak Dev served the travellers/passing people by providing them water to quench their thirst. Lucky were those souls who drank water from Maharaj's hands.

But the Guru refused to oblige him. Consequently the Guru was immediately imprisoned. In the prison his deep compassion for the suffering of prisoners had a great moral and spiritual influence on the prison officials. They informed the Emperor that Guru Nanak was not a worshiper of idols and that as a saint he was greatly respected by all the people including Hindus and Muslims.

A strange thing happened while Guru Nanak was imprisoned, a great earthquake shook Delhi on July 3, 1505. According to a chronicler, “the mountains were overturned and lofty edifices were dashed to the ground”. The living thought the day of judgement had come and that the Yaum al-Qiyĝmah, as the Muslim's call the Day of Resurrection, had come. Prone to superstition, many thought this was because the new Faqir Nanak, who had been imprisoned by the Emperor, had cursed the King and the empire. This or some other equally strong influence like the intervention of the Chisti Sufi saints changed the mind of the Emperor and he ordered the release of the Guru Nanak and at Guru Nanak's request many other prisoners were released as well.

As any other historical Gurdwara in India, Gurdwara Nanak Piao has grown exponentially in size and popularity in the last 50 years. It is certainly not the same as it was 10 years ago. 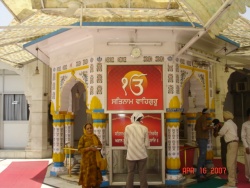 Another view of the well fully enclosed and covered with marble structure. In the days when Sri Guru Nanak Dev stayed at this place, it was just like any other ordinary well.

During his first udasi (Tour for the moral uplift of humanity), in the year of between (1505—10), Shri Guru Nanak Dev Ji stayed here for sometime and sanctified this place by his majestic personality.

Even in those times, owing to the heavy traffic on the G.T Road, a large number of travellers passed through this place. To provide fresh & cool water to the thirsty way-farers Guru Ji not only got dug a deep well here but also set up a permanent piao at this sacred place. Guru Ji took great pleasure in serving the cool & fresh water to the passers-by with his own hands.

Today, compared to any other city, Delhi has a large number of Sikhs. Though their numbers substantially increased in 1947 due to migration from Pakistan yet Sikhs have always been connected with Delhi.

This is probably the only city that has been visited by five gurus, namely Guru Nanak Dev, Guru Hargobind, Guru Har Krishan, Guru Teg Bahadur and Guru Gobind Singh, out of the 10 Gurus. 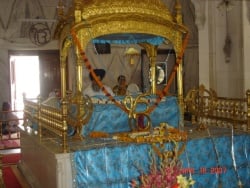 Guru Nanak visited Delhi during the rule of Sikandar Lodhi. He camped in a garden on the outskirts of Delhi in the area now known as Sabzi Mandi. Guru Nanak delivered sermons and sang his bani (kirtan) accompanied by Bhai Bala and Bhai Mardana. Soon a number of people started visiting him regularly. The garden where he was staying soon became a place of pilgrimage. Many would bring gifts for the Guru which he distributed among the poor. Guru Nanak made it a missionary centre.

Many travellers passing through would stay there. The food was regularly given to those who stayed. During the day, Guru Nanak himself would serve water from the well. The owner of the garden donated the land and it became a public shrine in the name of Guru Nanak. Initially called Pau Sahib, it is now known as Gurdwara Nanak Piao. 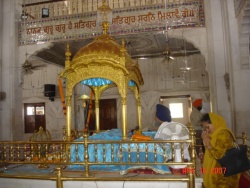 Most of the historical gurdwaras have one or more sakhis (tales) connected with the gurus. While staying here one day, Guru Nanak saw some people crying bitterly. The Guru went to them and enquired from them the cause of their suffering. They told him that they were weeping because their elephant had died. The Guru told them that they were mistaken. The animal was not dead but merely sleeping. On hearing this, they went near the animal and found that it slowly came to life. They fell at his feet.

The Emperor was told about this and it was reported to him that Nanak was a non-Muslim fakir, equally admired both by Muslims and Hindus, was visited by a number of people. One day, the Emperor’s favourite elephant died and he sent for the Guru. He asked Guru Nanak to bring the animal back to life.

Guru Nanak merely smiled and humbly said he was nobody. Life and death of everybody was in His hands. HE was the true creator and destroyer. It was not given to ordinary human beings like him to interfere with His will. He further observed that whatever happens is according to His will and one should accept and rejoice in His doings. It left the Emperor upset and enraged.

The death anniversary of Guru Nanak is observed at Guru Nanak Piao. Many devotees come and offer their homage there on that day. Gurdwara is situated on the old G. T. Karnal road in the Sabzi Mandi area.

Main Darbar Hall. Not as many people in the afternoon, but go there in morning and evening you find a lot of Sangat there.

It has an impressive Mughal-style gate. Gurdwara is on a 4/5 feet high platform and has wide pari-karama. The interiors of the main hall are very well done and part of the ceiling is in Sheesh Mahal style. Behind the gurdwara is a sarovar with beautiful arched veranda on the periphery.

The historic well is still functional and Amrit (nectar-like water) is served by the sewadars (volunteers). The well is covered with a white dome with pillars decorated in rather bright fashion.

There is a small garden which is in continuance of the garden that existed at that time. There is a separate set of rooms for holding individual Akhand paths. 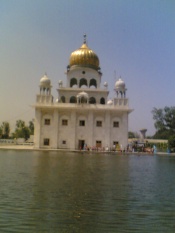 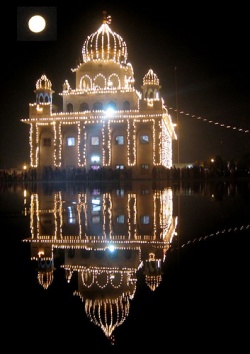 On the right side of the main gate are staff quarters which, for the sake of sanctity and beauty of the place, could have been located elsewhere in the premises. There is still lot of area lying vacant. Proper planning of that could greatly enhance the beauty and ambience of the gurdwara.