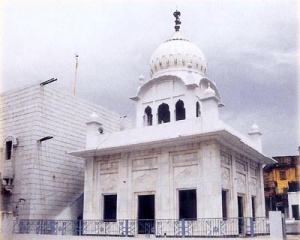 After his son Ajai Singh was killed, before Banda's eyes, his heart was cut out and dripping with blood it was forcibly pushed into Banda ji's mouth, then Baba Ji's eyes were gouged out. Baba ji's Body was then hung on a Gate where he was skinned alive. Then his body was pierced with red hot rods; finally he dismembered limb by limb. 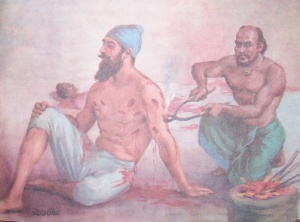 Banda Singh's Flesh was pulled off with tongs

"In every faith and every land, whenever men have become corrupt, despotic and tyrannical, God sends a scourge like me to punish them and teach them a lesson", thus spoke Banda Singh Bahadur a great Sikh hero in reply to a question put to him by Mohammad Amin Khan, the author of Siyarul-Mutakherin when he went near him to ask as to why he was waging war against the Mughals.

Banda Bahadur was tortured to death by order of the Mughal Ruler Farrukh Siyar on June 19, 1716 in Mehrauli near the Qutub Minar. Earlier he was taken through the streets of Delhi to the shrine of the Sufi Saint Khawaja Bakhtiar Kaki in Mehrauli. He was then paraded around the tomb of Emperor Bahadur Shah. He was offered the usual choice of death or conversion to Islam but like all his companions he chose death. He was ordered to kill his own four-year-old son Ajai Singh but he refused. Thereafter they butchered the innocent child. His heart was cut out and forced into Banda's mouth.

Exactly three years later the Saiyid brothers saw to it that, what one might call Divine retribution, caught up with the Emperor who had ordered the murder and beheadings of untold thousands of Sikhs besides Banda Bahadur and his conpanions. Farrukh Siyar was deposed, imprisoned, blinded and ultimately killed in a very ignominous manner on April 28, 1719.

Banda Bahadur's courage was unparalleled. He possessed a most fearless and undaunted spirit. W.L. M' Gregor, in his The History of the Sikhs wrote, "Banda Bahadur was a man of undaunted valour and bravery". The coolness with which he met his death, earned praise for Banda even from the historian Khafi Khan.

Banda Bahadur took over the military leadership of the Sikhs after the death of Guru Gobind Singh. On embracing Sikhism he became a staunch Khalsa Sant-Soldier of the tenth Guru, who followed the teachings of the Gurus in theory and practice living a pure and simple life.

During his time as the Jathedar of the Sikhs the followers of the young faith increased with many Hindus and even large numbers of Muslims becoming Sikhs. Nawab Amin-ud-Daula writes in the third Ruqat-I-Amin-Ud-Daula as follows, "Many Hindus and Musalmans adopted their faith and rituals. And their chief (Banda Bahadur) captivated the hearts of Musalmans who came in contact with him. He addressed them with the title of Singh. Accordingly, Dinder Khan, a powerful ruler of the neighbourhood was named Dinder Singh and Mir Nasir-ud-Din was renamed as Mir Nasir Singh."

A Mughal scribe charged with reporting events to the Mughal Darbar wrote to the Emperor about the activities of Banda Bahadur the following words, "The wretched man has his camp in the town of Kalanaur up to 9th instant. During the period he promised and proclaimed, 'I do not oppress Muslims'. He fixed a daily allowance and wages and looks after them. He has permitted them to read the Khutba and do Namaz. As many as 5,000 Musalmans have gathered around him. Having entered his friendship, they are free to shout their call and say prayer in the army of the wretched."

This report by the Mughal official speaks of Banda's allowing the Mughals under his rule to practise their religion in their own way freely, while the previous Emperor Bahadur Shah (Aurangzeb's son) who had been aided by the Sikhs and Guru Gobind Singh in securing the Mughal throne had issued on December 10, 1710 (after the Guru's death) an imperial order stating that, "every Sikh wherever found should be put to death without any hesitation and without any further thought'. Furrukhsiyar was the second Emperor to follow Bahadur Shah I his excessive cruelties on his own men would lead to his death.

Banda Bahadur established the first independent sovereign state under Sikh rule, with its own coins and seal. Although it was short-lived, it put the Sikhs on the path to establish their own rule in many parts of Punjab subsequently. Sri Gokal Chand Narang writes in his book, Transformation of Sikhism that the personal magnetism of Banda Bahadur was too great for the Mughals to ignore, as his undaunted courage and extraordinary valour knit his followers closely to him. The fact that not even a single Sikh, out of thousands that were captured and executed by the Mughal Government, renounced his faith to save his own life was due, in no small part, to the exemplary piety and lofty character of Banda Bahadur. 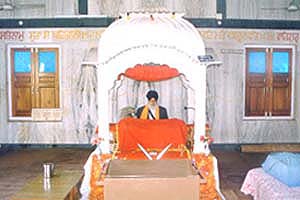 The nobel laureate and great poet Rabindra Nath Tagore, has vividly portrayed the heroism of Banda's martyrdom in his poem 'Banda Bir' which even today is memorised by almost every Bengali school boy. (Who knows if learning this poem has not influenced the Bengalis to be, besides the Sikhs, at the forefront of the early attemps to gain India its freedom from under the foot of British Imperialism.) The following lines of this poem are worth noting:

"In the arms of Banda the Brave, the Qazi flung his little babe, tender and innocent was the babe. He ordered Banda to kill his own child. Silently Banda looked at the child. Passionately he embraced the Child. Lovingly he blessed the child, tenderly he kissed the babe, looking fixedly at his face, then in his ear he softly whispered,

'Say, 'Glory unto the Guru my little one,
Fear not death my son,
Inspired by these words,
The child's face was aglow with fearlessness,
With tender but shrill speech,
He shouted loudly;
Guru Ki Jai,
Kichchu nahi bhai,
Hail to thee, Guru hail to thee,
From fear of death I am free,
With his eyes beaming with mighty courage,
He looked at his father's face,
On his left side struck deep the knife,
"Glory unto the Guru" shouted the child,
As he breathed his last breath,
On the earth he fell dead'

The Dargah of Khwaja Bakhtair Kaki

A 50-foot high pillar of stone over-looks the Dargah of Khwaja Bakhtair Kaki which now houses a Gurdwara in the memory of the supreme sacrifice made by this great Sikh hero. The pillar still has the steel hook from which, it is believed, he was hanged and had his skin peeled off. There is another Gurdwara in an improvised room in the courtyard of an adjoining site. Today it lies amid ruins.

This Gurudwara marks the site of the martyrdom of Banda Singh Bahadur. Banda Bahadur was earlier known as Madho Das. He had been a yogi who had used his 'magical' powers to impress other people. When Guru Gobind Singh reached the Deccan, he met with Madho Das, who tried in vain to subdue the Guru with his 'occult' powers which of course worked only on those who believed in such things. As Guru Gobind Singh did not believe in them the sadhu was unable to stare the Guru down with his 'powerful' evil eye. Humbled, he fell at the Guru’s feet and became his disciple.

Guru Sahib asked him his name, Madhu replied, "I am Banda your slave". The Guru added the name Bahadur to the name Singh that all members of the Khalsa don after taking Amrit. Thus it was Banda Singh Bahadur who was sent to Punjab to fight to free the people of Panjab, no matter their faith, from foriegn rule. Banda Bahadur and his army of Sikhs soon liberated many areas of Punjab. Finally, after an exhaustive siege the almost starved Banda Bahadur was defeated and captured in 1715. He and his fellow nearly dead Sikhs were brought to Delhi and, on the orders of Emperor Farrukhsiyar, brutally tortured and killed. 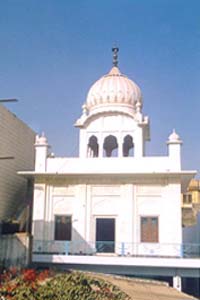 The Gurdwara's address and location

Gurdwara Banda Bahadur Sahib is situated near Post Office, Mehrauli, New Delhi. It is about one and a half kms away from the Qutab Minar.