STILL UNDER TRANSLATION BY: User:Sunnybondsinghjalwehra

It was a dark and moonless night; the clouds were heavy with rain as it was the monsoon season. Suddenly lightning flashed and thunder sounded as a few raindrops started to fall. The village was asleep. Only Nanak was awake and the echo of his song filled the air.

Nanak’s mother was worried because it was pitch dark and day break was far away. The lamp in his room was burning. She could hear his melodious voice as he sang, restraining herself no longer she knocked at his door. “Go to sleep, my son, the sun is a long way ahead.” Nanak became silent. From the darkness sounded the call of the sparrow-hawk. “Piyu, piyu, piyu!” it called.

“Listen, mother!” Nanak called out. “The sparrow-hawk is calling to his beloved; how can I be silent, because I am competing with it? I will call my beloved before he calls his – even for longer because his beloved is nearby, perhaps in the next tree! My beloved is so far away. I will have to sing for lives upon lives before my voice reaches Him.” Nanak resumed his song. 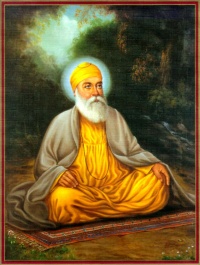 Guru Nanak’s path was, is & will ever remain decorated with endless rows of true flowers; he realised God by singing virtues of God and following a life of true deeds. Guru Nanak did not practise normal Hindu austerities, meditation or yoga; he only sang in the beautiful poetic forms of the time. Singing, often extemporaneously, with all his heart and soul, so much so that his singing became his meditation, his purification and his yugam (yoking ones self to the almighty, to Satguru. This was Nanak’s path; decorated with true flowers of song, songs of glory and praise of the Almighty Lord.

Whatever he has said was said in verse straight from GOD. His blissful & mesmerizing songs are not those of an ordinary singer; they have sprung from within one who has known. There is the ring of truth, the reflection of God within them. It is these songs, songs of love and expressions of truthfulness & worship, along with the songs of Guru Nanak's nine successors, that form the eternal Guru of the Sikhs, the Guru Granth Sahib.

His father was Kalayan Das Mehta, also known as Mehta Kalu, and his mother was Mata Tripta ji. They were Hindus belonging to the Vedic Brahmin caste. Guru ji had an older sister called Bebey Nanki, who was the first to recognise Nanak as an enlightened Soul. Guru Nanak from an early age evidenced a questioning and enquiring mind. He soon mastered the Vedas and Sanskrit and was enrolled into a madrassa to study Persian and Arabic. Picking up both languages quickly, he surprised is teacher by composing an acrostic on the Persian language. When it was time for Nanak to be invested with the twice born thread the “sacred” thread, called the Janeu, he refused to take part in the ritual. When the priest continued to insist that the young Nanak done the string he went into a trance and sang:

Let mercy be the cotton, contentment the thread,
Continence the knot and truth the twist.
Oh priest! if you have such a thread,
Do give it to me.
It will not wear out, nor get soiled, nor be burnt, nor lost.
Says Nanak, blessed are those who go about wearing such a thread.

Guru Nanak's Life at Sultanpur Nanak married Sulkhni, of Batala, and they had two sons, Sri Chand and Lakhmi Das. Guru ji's brother-in-law, the husband of his sister Nanki, obtained a job for him in Sultanpur as the manager of the government's grainary. One morning, when he was twenty-eight, he went as usual down to the river to bathe and meditate. It was said that he was gone for three days. When he reappeared, filled with the spirit of God, it was apparent to all that he was a changed man. He would say nothing, he quite his job and distributed all that he had to the poor. Accompanied by his childhood friend, a Muslim named Mardana who had always played the Rebab while Nanak sang, they left town. When , after a few days, he spoke saying "There is no Hindu, no Musalman."[1] It was then that Guru Nanak began his missionary work and travels.

As a householder, Guru ji continued to carry out the mission of his life – to lead people on the true path to God, to dispel superstition, to bring people out of ritualistic practises, to lead them directly to follow Gurbani without the need for priests and clergy, and to restrain and guard against the five thieves within – Pride, Anger, Greed, Attachment and Lust.

1. Naam Guru ji led the Sikhs directly to practise Simran and Naam Japna – meditation on God through reciting, chanting, singing and constant remembrance followed by deep study & comprehension of God’s Name and virtues. In real life to practice and tread on the path of Dharam (righteousness) - The inner thought of the Sikh thus stays constantly immersed in praises and appreciation of the Creator and the ONE ETERNAL GOD Waheguru.

2. Kirat Karni He expected the Sikhs to live as honourable householders and practise Kirat Karni – To honestly earn by ones physical and mental effort while accepting both pains & pleasures as GOD's gifts and blessings. One is to stay truthful at all times and, fear none but the Eternal Super Soul. Live a life founded on decency immersed in Dharam - life controlled by spiritual, moral & social values.

3. Vand Chakna. The Sikhs were asked to share their wealth within the community by practising Vand Chakna – “Share and Consume together”. The community or Sadh Sangat is an important part of Sikhism. One must be part of a community that is living the flawless objective values set out by the Sikh Gurus and every Sikh has to contribute in whatever way possible to the common community pool. This spirit of Sharing and Giving is an important message from Guru Nanak.

During his his time on Earth Guru Nanak was revered by both Hindus and Muslims and even today many, outside of the Sikh faith, still rever him. It is related that as he lay dying, his followers some formerly Hindu and others formerly Muslims argued whether his body should be cremated as Hindu tradition dictated or buried as in Islamic tradition.

His contributions to humanity were more advanced than anyone else of the time, including those of the Western nations.

His main contributions were:

When in the middle east, the west and the rest of asia slavery, varna/class and race discrimination was rife and respect between the different classes and caste was at a peak, Guru Nanak preached against discrimination and prejudices due to race, caste, status, etc. He said: "See the brotherhood of all mankind as the highest order of Yogis; conquer your own mind, and conquer the world." (SGGS page 6); also "There is one awareness among all created beings." (page 24) and finally "One who recognizes the One Lord among all beings does not talk of ego. ||4||" (page 432). He urges all the peoples of the world to "conquer" their minds to these evil practises. All human beings had the light of the Lord and were the same -- only by subduing one's pride and ego could one see this light in all.

In about 1499 when the world offered low to no status or respect to women, Guru Nanak sought to improve the respect of women by spreading this message: "From woman, man is born; within woman, man is conceived; to woman he is engaged and married. Woman becomes his friend; through woman, the future generations come. When his woman dies, he seeks another woman; to woman he is bound. So why call her bad? From her, kings are born. From woman, woman is born; without woman, there would be no one at all. O Nanak, only the True Lord is without a woman." (page 473). In so doing, he promoted women's rights and equality — a first for the 15th century!

It had been a custom at the time for religious leaders to address only their own congregation and for segregation of the different religions -- but Guru Nanak broke with tradition and spoke to all of humanity. To the Muslim he said: "And when, O Nanak, he is merciful to all beings, only then shall he be called a Muslim. ||1||" (page 141); to the Hindu, he said "O Nanak, without the True Name, of what use is the frontal mark of the Hindus, or their sacred thread? ||1||" (page 467); and to all he preached: "To take what rightfully belongs to another is like a Muslim eating pork, or a Hindu eating beef." (page 141). 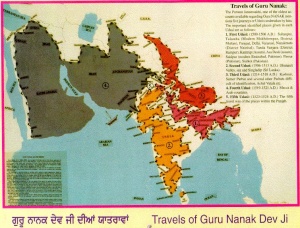 History states that he made four great journeys, travelling to all parts of India, and into Arabia and Persia; visiting Mecca and Baghdad. He spoke before Hindus, Jains, Buddhists, Parsees, and Muslims. He spoke in the temples and mosques, and at various pilgrimage sites. Wherever he went, Guru Nanak spoke out against empty religious rituals, pilgrimages, the caste system, the sacrifice of widows, of depending on books to learn the true religion, and of all the other tenets that were to define his teachings. Never did he ask his listeners to follow him. He asked the Muslims to be true Muslims and the Hindus to be true Hindus. 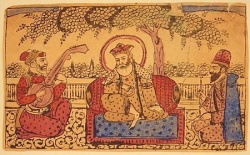 Guru Nanak with Mardana (left) and Bala Coloured woodcut, Amritsar or Lahore, about 1875

After the last of his great journeys, Guru Nanak tried a new experiment - he asked a wealthy follower to donate a large tract of land . Here he built a town calling it Kartapur (in Punjab) on the banks of the Ravi where he taught for another fifteen years. Followers from all over came to settle in Kartapur to listen, and sing, and be with him. During this time, although his followers still remained Hindu, Muslim, or of the religion to which they were born, they became known as the Guru's disciples, or sikhs. It was here his followers began to refer to him as teacher, or guru. The Guru told his followers that they were to be householders and could not live apart from the world -- there were to be no priests or hermits. Here is where the Guru instituted the common meal, requiring the rich and poor, Hindu and Muslim, high caste and low caste, to sit together while eating. All worked together, all owned the town. Here is where Lehna, later to be Guru Angad, came to be with Guru Nanak.

To this day in Gurdwaras from the Punjab around the world to California's Yuba City people of all religions and creeds can enjoy a wonderful evening of beautiful song, music and of course a hot friendly meal.

A well known legend, when Nanak met Akbar[Mogul-e-Azam], the Emperor offered him a shared pipe of [Bhang], Nanak replied that he had a bhang whose wonderful effects never wore off. Inquiring of Nanak where he could find such wonderful bhang - Nanak declined the emperor's offer, saying GOD the [SAT GURU] was his bhang.