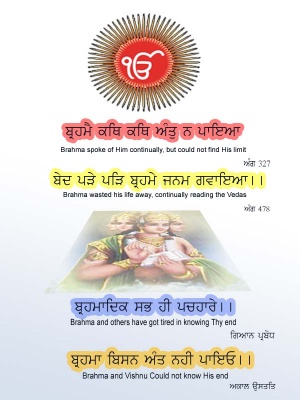 Brahma is the well known Hindu diety. Hindus call him the deity of creation. In Hinduism, he is one of the Trimurti, the others being Vishnu and Shiva. He is not to be confused with the Supreme Cosmic Spirit in Hindu Vedanta philosophy known as Brahman. Brahma's consort is Saraswati, the goddess of learning.

According to the Puranas, Brahma is self-born (without mother) in the lotus flower which grew from the navel of Vishnu at the beginning of the universe. Guru Granth Sahib also told the story of Puranas i.e Brahma born in the navel lotus of Vishnu was called the son of Lotus.(Kama M. 4, p. 1309)

Acc. to Guru Granth Sahib, Brahma did not realise that he was puffed up with ego. When he was in trouble because of (the theft of) Vedas, he repented.(Gauri M. l, p. 224) Brahma was called great god, but could not know the Limits of Lord-God.(Var Malar M. l, p. 1279)Brahma manifested the hymns of the Veda but extended the attachment of maya.(Wadhans M. 3, p. 559)The recitation of Vedas originated from Brahma, from whom, the gods of attachment and desire sprang forth. They strayed in three modes and could not find their real abode.(Gauri M. 3, p. 230)Brahma came into the house of death. He could not know the end of the Lotus of God (in which he was borm).(Gauri M. l, p. 227)

Gurbani says that not only was the Brahma of the Hindu's sent to Earth, but that Millions of Brahmas have been assigned the task of creating the world. (Bhairo M. 5, p. 1156)

Guru Gobind Singh in the Dasam Granth writes that Brahma was a worshiper of the One Creator God, Ik Oankar. When the Lord commanded, Brahma preprared the Vedas; at that time his pride was increased and he did not consider anyone else like himself. He thought that there was none other like him and there was no other poet like him. Due to his Ego God punished him. Brahma meditated upon God, hoping to get back to him. Vishnu is also said to have advised Brahma to meditate on the Lord to get back to him.

In the Bachittar Natak it is also mentioned that:

Dasam Granth contains the history of Incarnations of Brahma under the title of Brahma Avtar.

Additionally, Dasam Granth has same views for brahma as that of gurbani:

Acc. to Akal Ustat, Ik Oankar hath created and destroyed Brahmas and Rudras (Shivas). (Page 35) and Brahma and Vishnu Could not know His end. (Page 35)