Charitar 16, also called Tale of Chajjia, is a Charitar (tale of trickery) mentioned in Charitropakhyan, a Bani complied by Guru Gobind Singh. It is about a Manmati (self-centred) prostitute named Chajjia, who played a trick in an attempt to seduce a King. The King, however, was devoted to Dharam (path of righteousness) and held steadfast to his duty to stay on the path of Dharam.

The prostitute tried many avenues to get her way; stooping to the lowest limits of human behaviour. The King on the other refuses to bow to lowly behaviour and attempts to reason with her to get her to give up her attempt to convince him to lower his morals, however she does not accept his rejection and continues her attempt to corrupt his path.

She tries to trap the King by calling out "thief, thief....". The King then realises that he must think quickly to find a way out of the situation - otherwise he will indeed be trapped! Finally, he manages to escape from this prostitute by himself playing a trick on her to save his Dharam and stay dedicated to the path of righteousness.

Some people claim it to be event of Guru Gobind SIngh's life which is a fake claim which is explained further in this article.

This is Dharma or religion. The King knew that he was faced with fraud and to save his religion he would have to do something - so his Triya (mind) plays a charitar (trick) on the prostitute.

Charitropakhyan is conversation between a wise adviser (minister or "manteree" ਮੰਤ੝ਰੀ s ) to Raja (king) Chitar Singh; each charitar or trick is mainly in connection with the wiles of women (plus a few connected with men) and other worldly tales of life, in order to save his handsome son Hanuvant from the false accusations of one of the younger ranis (queens). The minister tries to explain to the Raja that there can be trickery in human behaviour and that one needs to analyse the situation carefully before drawing any quick conclusions. Charitar means Function or behavior

Guru Gobind Singh has given these "opakhyan" (already told) stories to Khalsa, as a guide to upholding morality. The tales highlight Human psychology and behavior, by people driven by desires, lust, jealousy and/or greed, ignorance etc. and tell how these evil doers can utilize tricks or deception or charm or other activity to cover their tracks. The purpose of the stories is for us to learn about negative(Manmat) and positive(Gurmat) human behaviour by people who are driven by evil intent. One needs to tread carefully in life and understand the many negative traits exist in some evil doers. These Charitars includes Male and Female Charitars.

Charitar 16 is about a King who live on the banks of Satluj and a beautiful prostitute named Chajjia (known to the King as Ladhia or "Lovely"). Motivated by money and attracted to the King she wanted to trap him; but the King showed no interest in her. She used all her charms and magic too, to get the King's attention but he was unimpressed with her attempts.

She then disguised herself as an ascetic or Jogi or Yogi; the King being religiously minded became happy; he thought that he should learn some charms - mantras, exercises and postures from this Jogi. So the King sent his adviser to this Jogi. The Jogi (Chajjia) asked the adviser to send the King to his (her) apartment after midnight and said that "..... with the blessings of Gorakh Nath, he would not return home disappointed".

The King reached (the Yogi's) place at the appointed time; the Ascetic (chajjia) sent instruction, through the King's advisor, for the King to send everyone away and to bring festival lights, flowers and the best wine before he would starts his teaching session. When they were alone, he told the king that he would start with a miracle and then teach him some magical yoga charms. First, he said, he would change himself into a woman and then back into a man. "Then becoming a man again, I will teach you charms and, then turning into a woman I will indulge in sexual play with you." The King was interested in learning the charms, but he told the Jogi that he was not interested in any "indulgence in sexual play"..

Angered, Chajiya showed her real face and demanded sex. She said that one should fulfil sexual needs of any lady if she demands it else one will go to hell. She threatened to call out to her neighbors, if the King did not do as she asked. She tried her best to convince the King, but the King said that he is in favour of Dharma (path of righteousness) and that he would not discard this path.

She then raised her voice to call out to her neighbours, to stall for a moment the king pretended to be considering her proposal, so that she would send her neighbours back. The King then realised that he needed to think quickly to get out of this situation.

Then the King played a trick to save his dharma; he said to the woman to bring marijuana, cannabis, opium and wine so that we can get in the right mood and then we can enjoy each other for the whole night. At this, she became happy.

The excited woman brought all the intoxicants and prepared everything; the King start giving the wine to Ladhiya and even began to praise her; he gave her many cups of wine and showered extraordinary affection on her; it wasn't long before Ladhiya passed out under the influence of the wine. The King then left her and returned safely to his home.

Is the Charitar linked to Guru Gobind Singh? 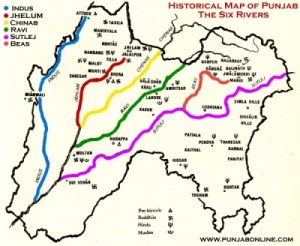 Satluj Pases through various cities and towns of HImanchal, Punjab and Pakistan

Historical Significance is not the main motive of these stories. Stories are given to read and to learn from them. Only positive mind will able to extract positive morals out of them, all other will remain tangle in histories. It's like to find the name of Rabbit from story Rabbit and Tortoise whose moreal is slow and steady wins the race. Many characters are generated from writers own's mind, many stories were famous those times, which were given just for teachings. There is no historical Significance of these stories, these are given for guidance only.

The line "ਤੀਰ ਸਤ੝ਦ੝ਰਵ ਕੇ ਹ੝ਤੋ ਰਹਤ ਰਾਇ ਸ੝ਖ ਪਾਇ ॥" means "on the banks of river Satluj lived one Rai". The word "rai" means "king". Nowhere is there any mention of Anandpur or anything else to point to the Guru; neither the name of Rai nor name of city! So how can these masses relate this charitar to the Guru? Are they ignorant?

If one analyses the Charitar, a few questions can be easily answered:

The river passes through various cities and towns. And their are many cities in Punjab and Pakistan which are on banks of this river and many of these cities had rulers or "Rai" too. So how can anyone say that it's about Anandpur when this is not mentioned in the text?

So please prevent yourself from being mislead by such folks who do not have the depth of knowledge to understand this text. 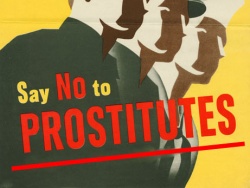 Many of it's teaching matches with Guru Granth Sahib.

Chajia disguised in attire of ascetic met the king who wanted to learn mantra of wisdom and yogi skills from the Yogi. However, Ladhia or Chajjia was only interested in satisfying her sexual cravings and was there just for sex; she tries desperately to convince and trap the king for sex. As King was strong in his dharma and clever, he played trick and escaped from the woman; within the limit of dharma and to save his dharma the king escaped; he also gave money to her because that possibly was her long term motivation to trap the king.

There are many lessons that a Gurmukh can learn from this charitar:

i.e Prostitutes are lover of just money, so king also left money before leaving. The teaching comes that Prostitutes are not good friends. They sell their body for sake of money only.


Thieves, adulterers, prostitutes and pimps, then

i.e If king do sex and son born that they would have no name they would be called as Bhaand and if daughter born she will too called prostitute,