From SikhiWiki
(Redirected from Satluj River)
Jump to navigationJump to search 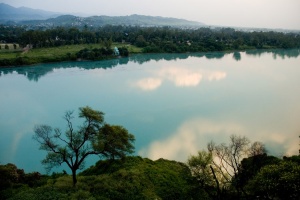 Sutlej (sŭt`lĕj, Punjabi: ਸਤਲ੝ਜ, also known as Satluj) is the longest of the five rivers of the Punjab (pŭn'jäb`) [Pers.,=five rivers], which is a historic region in the NW of the Indian subcontinent. Since 1947 it has been separated into an Indian state and a Pakistani province bearing the same name.

The province is 900 mi (1,450 km) long, rising in the Kailas Range, SW Tibet region of China, and flowing generally west, meandering through the Himalayas in India, then onto the Punjab plain where it receives the Beas River and forms part of the India-Pakistan border; continuing into Pakistan, it is joined by the Chenab River (which received the Jhelum and Ravi rivers).

The combined stream, the Panjnad, channels the collected waters of all five rivers of the Punjab into the Indus River. The Sutlej is extensively used for irrigation; many large canals branch from it. Bhakra Dam (750 ft/229 m) in Punjab state, N India, impounds water for irrigation and power production (450,000-kW capacity). Until the Sikh Wars in the 1840s, the Sutlej was the border between the Sikh and British spheres of influence.