Charitar 71 or Tale of King of Sirmaur, is one of 405 tales written in the Charitropakhyan, bani by Shri Guru Gobind Singh. This tale is the Seventy-first (71st) Charittar of the Charitropakhyan. According to Nihang Singh traditions, the event is related to Guru's own life during his stay at Kapal Mochan other believe it not related to Guru Gobind Singh but some unknown King. 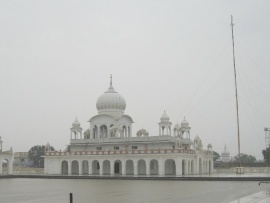 The whole of the composition of Charitropakhyan is the conversation of Raja Chitar Singh and his Minister. The Minister of King was a wise man who narrated all the following charitars to King Chitar Singh telling how a man can get betrayed if he does not apply his brain before reaching a hasty conclusion and how one should think calmly and become politically astute.

Today Sirmaur is the most south-eastern district of Himachal Pradesh, India. It is largely mountainous and rural, with 90% of its population living in villages. There are six tehsils in this district, namely Nahan, Renuka, Shilai, Rajgharh, Pachhad and Paonta.

As the title makes clear this is the tale of King of Sirmaur. There is a pilgrim place of Kapaal Mochan on the banks of the Jamuna. While leaving the City of Paonta, the King's party came to this place. While on this hunting exercise, they killed many deer and boars; then they took the road to the holy place and paid obeisance to that place of pilgrimage. The King noted that many people(Localites) abused this place.

Problem at Kapal Mochan
They spoiled the sanctity of the place. The King saw that the visitors used to urinate near the Sarovar at Kapalmochan. So when it rained the whole faecal matter and waste came into those Sarovars and other water bodies. Those Sarovars and ponds were used to drink water, people bath in them and even Hindu priests also do their pooja taking water from them and they put same water on Devi Devtas. The King was against all this and asked priests, to which they replied that they always say this to people but no one listens. As it was difficult to dug out well their so the same sarovar was used for drinking and other purposes. King was environmentally aware.

Arrival of Sikhs
Many Sikhs arrived at this place and the King wanted to give robes of honour, a custom still practiced in Panjab to this day. The King sent some of his men to Paonta and Buria to purchase robes, but their efforts were in vein, as no robes were available in any shop of the city. Now it was a problem. However, the behaviour of some dolts and thoughtless people soon provided the King with a solution. The King played a Charitar in limit of religion.

Turban Snatching Issue
Wanting to teach them a lesson, the King told his Sikhs, that if they found any person urinating/or passing stool near the banks of the Sarovars, they should remove his turban and send them back without turban. The King's men did as they were told and many turbans of those men who were caught urinating at that place were taken as the men were told so that they would not do the same in the future. (When such people go to their places and when people asked where is your turban then such people replied that had been snatched. Why? because they were ruining sarovars.)

Many, many turbans were taken, which tells us the huge number of men without proper respect for the holy place. This tale is to kill two with one arrow. The King, was able to put the ignorants on the right track, while he also got robes for honouring Sikhs. So after these turbans were washed and cleaned, the King was able to honor the Sikhs with Robes of Honor when only a few days before none could be found.

The Chariter in Gurbani script, with each line translated into English: