Gurbani may be recited in the Sadh Sangat at any time, whether or not one is in the presence of Siri Guru Granth Sahib. A beautiful form of recitation in a group is to divide into groups of men and women with each reciting an alternate sutra. (A sutra is a complete line of poetry.) In the Gurmukhi each sutra is separated by two vertical lines (//). Gurbani should be recited rhythmically and meditatively. 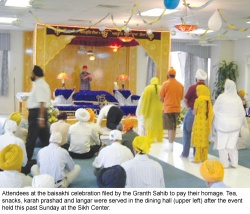 In Sikhism, it implies daily repetition of scriptural texts from the Guru Granth Sahib]. Reading of certain banis is part of a Sikh’s nitnem or daily religious regimen. Path of these prescribed texts is performed from a handy collection, called gutka (missal or breviary) or from memory. Five of the banis, Guru Nanak’s Japji, Guru Amar Das's Anand Sahib and Guru Gobind Singh’s Jaap Sahib, Savaiye and Chaupi Sahib — constitute the Sikhs mandatory morning path or devotions, and two — Rehras and Kirtan Sohila — evening path.

Some individuals add certain other holy texts as well such as Shabad Hajare and Sukhmani to their regular meditation regime. Certain individuals believe that as the Rehras contains both the Chaupi Sahib and Anand Sahib, these two paaths do not need to be recited in the morning prayer, however the Rehras contains only the short version of the Anand Sahib therefore it should be recited as a morning paath.

The path is also performed individually and more particularly in sangat from the Guru Granth Sahib itself. The Holy Volume is ceremonially installed under coverlets on a decorated seat resting on a raised platform, with a canopy above, and is opened by the pathi or reader who sits reverentially behind. Usually, another man stands in attendance, waving the fly-whisk (Chaur) over the Holy Book. The pathi should have bathed and be dressed in clean clothes.

Besides the reading of one single hymn to obtain vak or hukamnama (lesson or command for the day) or of some passages, three forms of complete path of the Guru Granth Sahib are current: akhand Path (unbroken recitation completed in forty-eight hours), saptahik (completed in a week) and sadharan or sahaj (taken in slow parts with no time-limit for completion). A rarest variety is ati akhand path, hardly ever practised, in which a single participant reads within the prescribed 48 hours the entire text.

Another variety is the sampat path. No time-limit is specified for it. Different schools and different groups or pathis have their own schedules. But the commonest factor in this variety of path is that a whole shabad or a portion of it from the holy text will be set apart for repetition after every full stanza or apportioned section of it has been recited.

Time-limit will thus be variable, depending upon the length of the verse or verses chosen for repetition. The hymn or portions of it chosen for repeated recitation will be governed by the occasion or purpose of the path. At certain places even the Mul Mantra is repeated with the chosen line or lines. The relay of pathis (readers) in this instance will naturally be larger than in the case of a normal akhand path.