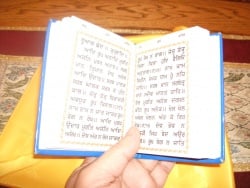 Nitnem is a collaboration of different banis that were designated to be read by Sikhs every day. The Nitnem bani's usually include the Panj bania (5 bani's below) and sometimes Rehiras Sahib and Kirtan Sohila.

The following 5 Banis are normally read by practising Sikhs early in the morning.

The 5 Banis are usually recited in the early morning while Rehiras is read in the evening around 6pm. Kirtan Sohila is recited just before going to sleep at night.

3. Anand Sahib, is a complilation by the Third guru Guru Amar Das. This bani is part of SGGS. Link to Anand Sahib

4 Rehras Sahib or Sodar Rehras which consists of hymns from [[SGGS] plus 4a). Sawayya ) 4b). Benti Chaupai ) by Tenth Guru.

5. Kirtan Sohila – Prayer to be recited before going to sleep, which is also recited just before the body of a Sikh is cremated.