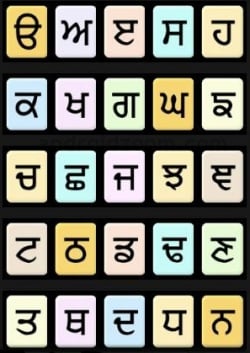 GURMUKHI is the name of the script used in writing primarily Punjabi and, secondarily, Sindhi language. It is used in the Sikh scripture and in contemporary India.

It is an evolute from the old Brahmi script like Devanagari and other scripts of the area like Sharda, Takri, Mahajani etc. Gurmukhi characters are even older than Devanagari.

The word Gurmukhi seems to have gained currency from the use of these letters to record the sayings coming from the mukh (literally mouth or lips) of the (Sikh) Gurus. The letters no doubt existed before the time of Guru Angad Dev (even of Guru Nanak) as they had their origin in the Brahmi, but the origin of the script is attributed to Guru Angad Dev.

It is commonly accepted that Gurmukhi is a member of the Brahmi family. Brahmi is an Aryan script which was developed by the Aryans and adapted to local needs. According to an opinion, (?) the Brahmi script was introduced between the 8th and the 6th centuries BC. It does not concern us here whether the script was foreign or local, but it has now been established, on the basis of internal evidence,(what internal evidence?) that no matter its name, the Aryans did have a system of writing which must have been borrowed freely from local scripts.

Persians ruled in the Punjab in the 3rd and 4th centuries BC. their script helped in the growth of the Kharosthi script that was used in Gandhar and Sindhi and largely in the Punjab between 300 BC and 3rd century AD. But even then Brahmi, which in its development in the Punjab had undergone several changes, was commonly used along with Kharosthi. There are coins of the Bactrian kings and inscriptions of the Kushan rulers having both Persian and Kharosthi scripts on them.

Brahmi was, of course, more popular on account of its simple curves alternated with straight strokes. Hence, in due course, it replaced Kharosthi and became the single script with composite features effected by various local and neighbourly influences. With the growth of literary and cultural activity during the Gupta period (4th and 5th century AD), the Brahmi script improved further and became more expansive and common.

Immediately later, it developed, especially in northern India, fine curves and embellished flourishes with a small headline over each letter, and became rather ornamental. This stage of Indian script was called Kutil, meaning curved. From Kutil evolved the Siddhamatrika which had the widest use in northern India. Some scholars think that these two scripts existed simultaneously. From the sixth century to the ninth, Siddhamatrika had a very wide use from Kashmir to Varanasi. With the rise of regional languages taking the place of Sanskrit and Prakrit, regional scripts grew in number. Ardhanagari (west), Sharda (Kashmir) and Nagari (beyond Delhi) came into use, and later both Sharda and Devanagari, an off short of Nagari, started their in roads into the land of the five rivers. This is evident from the coins of the Ghaznavids and Ghoris minted at Lahore and Delhi. It is also known that the common (non-Brahman and non-official) people used a number of scripts for their temporal and commercial requirements. Of these Lande and Takri characters were most prevalent.

What do Scholars Say ?

It is on account of these currents that scholars have tried to establish relationships of Gurmukhi with Devanagri (G.H. Ojha), Ardhanagari (G.B. Singh), Siddhamatrika (Pritam Singh), Sharada script or (Sharda) (Diringer) and Brahmi (generally). Some ascribe it to Lande and some others to Takri, a branch of Sharda used in Chamba and Karigra. The fact is that it is dervied from or at least allied to all these and others mentioned above in their historical perspective.

Association With Other Scripts

Regionally and contemporarily compared, Gurmukhi characters have direct similarities with Gujarati script, Lande, Nagari, Sharada script or (Sharda) and Takri: they are either exactly the same or essentially alike.Internally, Gurmukhi had undergone some minor orthographical changes before AD 1610. Further changes came in the forms of H, T, and 7? in the first half of the nineteenth century. The manuscripts belonging to the eighteenth century have slightly different forms of these letters. But the modern as well as old forms of these letters are found in the orthography of the same writers in seventeenth and eighteenth centuries.

Its alphabet was consolidated and formally declared as a script by the second Sikh Guru, Guru Angad Dev who gave it the name Gurmukhi when he used its characters to transcribe the biography and hymns of Guru Nanak.

The purpose for creating this script was to make the Adi Granth accessable to the general public. The tradition system at the time was that a person had to study extensively to understand religious texts. Gurmukhi can be learned easily and the language was the common tongue of the area, so the Guru's teachings could reach all who wanted them. Like Hindi and Urdu, it is derived from Sanskrit.

It is a misnomer to credit Guru Angad as the inventor of Gurmukhi's characters, as even before Guru Nanak, the characters' usage had been prevalent in Punjab (according to in a tablet found at Athur in Ludhiana district). Even Guru Nanak himself based one of his poems entitled 'patti' on its characters.

Guru Angad did more than simply modifing and rearranging letters, as he also shaped them into a script, making it more precise and more accurate.

He fixed one letter for each of the Punjabi phonemes; use of vowel symbols was made obligatory, the letters meant for conjuncts were not adopted and only those letters were retained which depicted sounds of the then spoken language. There was some rearrangement of the letters also. H and T which were in the last line of the existing alphabets, were shifted to the first line. Again, V was given the first place in the new alphabet.

Another reform carried out is the separation of lexical units of the sentence which previously formed one jumbled unit; lately punctuation marks borrowed from English have been incorporated besides the full stop (1) which existed traditionally.

The Gurmukhi script is semi syllabic in the sense that 'a' is included in the consonant signs in some situations. This 'a' is not pronounced at the end of the syllable. Thus, oW is kal, and cTH is Ram, that is, or in oTff (kal) represents k+a, while B" represents only 1. Other vowels after consonants are shown by vowel symbols which also happen to be the first three letters of the Gurmukhi alphabet. Of these, the first and the third are not used independently. They always have a diacritic attached to them. The second letter is used without diacritics also, and in that case it is equivalent to 'a' as in English 'about'. With diacritics a total of ten vowels are formed, viz., u, u, o, a, a, ai, au, i, i and e. Of these vocalic diacritics, 'i' occurs before a consonant (although pronounced after it), uandu are written below; a and i after a consonant; and e, a,i, o and au over a consonant. Similarly, the nasalization sign is also used over a consonant though in fact it nasalizes the vowel. Of all the vowel marks, called lagdnm Punjabi, a is the oldest, though initially just a dot was used for it. The vowel marks i and u are found in Asokan edicts and later inscriptions.

All Gurmukhi letters have uniform height and can be written between two parallel horizontal lines, with the only exception of (the first letter of the alphabet) the top curve of which extends beyond the upper line. From left to right, too, they have almost uniform length, only "H" (aim) and W (ghagghd) may be slightly longer than the rest. However, the placing of vowel symbols under and over the letters, a characteristic of all Indian scripts, creates some problems in printing and typing.

No change is effected in the form of the letter when a vowel symbol or diacritic is attached to it, the only exception being to which an additional curve is added which represents two syllables. This is the only example of a single graphic form representing multiple sounds (and this form has a theological background); otherwise there is no Gurmukhi letter representing more than one phoneme, and there are no digraphs.The first letter in the Gurmukhi arrangement, is nontraditional and appears to be so due to Us importance in the Sikh scriptures as IV, i.e. God is one. After vowels come and A which are usually placed at the end of Indian syllabary. Other consonantal symbols are in their traditional order. The terms given to the consonants are their reduplicative phonetic values. Thus oT is called kakka, is vava. Only is tainha. The syllabary ends with 3" rara. The total number of letters is 35 (3 vowels, 2 semivowels, and 30 consonants). They are 52 in Devanagari, 41 each in Sharda and Takri. A dot at the bottom of a number of consonants has been used to represent borrowed sounds such as s, kh, gh, z, and f.

These have been lately introduced though not as a part of the original alphabet. Geminate (double or long) consonants are indicated by an overhead crescent sign, termed as adhak and placed above the consonant preceding the affected one. There is paucity of conjunct consonants in the system. Only 3" ,S are combined as second members of the clusters and placed without the head line under the first members. 3 as the second member of the conjuncts may also be depicted under the first member just in the shape of a slanting comma.

It is felt that conjunct consonants, thanks to Sanskrit and English influence and expansion of the range of the Punjabi language, are no longer foreign to Punjabi pronunciation. There is, therefore, great need to adopt, adapt or invent them. Attempts have been made by some scholars but their acceptance is still limited.

Gurmukhi has played a significant role in Sikh faith and tradition. It was originally employed for the Sikh sriptures. The script spread widely under Maharaja Ranjit Singh and after him under the Punjab Sikh chiefs, for administrative purposes. It played a great part in consolidating and standardizing the Punjabi language.

For centuries it has been the main medium of literacy in the Punjab and its adjoining areas where earliest schools were attached to gurdwaras. Now it is used in all spheres of culture, arts, education and administration. It is the state script of the Punjab and as such its common and secular character has been firmly established.

The Gurmukhi Alphabet is also called 'Painti Akhri' because it contains thirty-five letters.

The alphabet has also crossed the frontiers of its homeland. Sikhs have settled in all parts of the world and Gurmukhi has accompanied them everywhere. It has a brighter future, indeed, in and outside the land of its birth. Till recently, Persian script was largely used for Punjabi and there was initially a considerable amount of writing in this script, but it is becoming dated now. However, in the Pakistan Punjab, Punjabi is still studied, at postgraduate level, in Persian script.

The following 6 letters are secondary letters that form the complete character set of Gurmukhi. These are modified primary letters:

The following are Letter Modifiers

Tools for learning Gurmukhi or Punjabi as it is also referred to can be found on the internet and in books. Below are listed the addresses of sites where one is able to access information on learning Gurmukhi:

Gurmukhī script was added to the Unicode Standard in October, 1991 with the release of version 1.0. Many sites still use proprietary fonts that convert Latin ASCII codes to Gurmukhi glyphs.