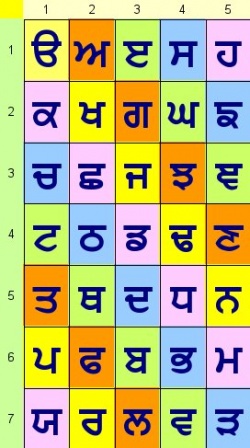 The word Gurmukhi literally means "from the mouth of the Guru". Gurmukhi is the name of the script used in writing primarily Punjabi and, secondarily, Sindhi language. It is exclusively used to write the Sikh holy scriptures, Sri Guru Granth Sahib and Dasam Granth.

Although the "Painti Akhri" was originally just used in Punjab, India, the alphabet has now crossed the frontiers of its homeland. Sikhs have settled in all parts of the world and Gurmukhi has accompanied them everywhere.

Structure of the alphabet