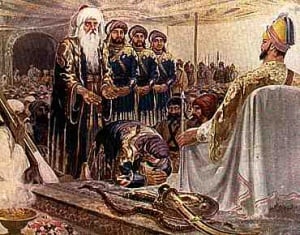 Pic Depicting Peer Buddhu Shah with his sons and followers

Peer Buddhu Shah (13 June 1647 - 21 March 1704), was a Muslim divine whose real name was Badr ud Din, who was an admirer and ally of Guru Gobind Singh. He visited the Guru regularly and at one point introduced 500 shias Muslims Pathan soldiers who had been expelled by Aurangzeb to the Guru who employed them. However, when these soldiers faced battle against the Hill chiefs, they deserted the Guru's army.

The Peer was very upset by this action and brought many hundreds of his own followers and his family members to assist the Guru's force. The Guru was most impressed by this dedication shown by the Peer in this urgently needed support. However, in supporting the Guru, this action made him an enemy of the Mughals, who in 1704 executed him.

When Banda Singh Bahadur came to know that the Peer had been executed because he helped Guru Gobind Singh in the battle of Bhangani, he avenged the Pir's death by storming Sadhaura and killing Usman Khan, who had been responsible of the Peer's death. Pir Buddhu Shah's descendants migrated to Pakistan in 1947. Their ancestral house in Sadhaura has since been converted into a Gurdwara named after Pir Buddhu Shah.

He was born on 13 June 1647 in a prosperous Sayyid family of Sadhaura, in the present-day Ambala district of Haryana. Because of his simplicity and silent nature during his early childhood he was given the nickname of Buddhu (literally meaning "simpleton") which stuck to him permanently. He was married at the age of 18 to a pious lady, Nasirari who is better known as Bibi Naseera. She was the sister of Said Khan a high ranking officer in the Mughal army. Peer Buddhu Shah had four sons Sayyed Ashraf, Sayyed Muhomad Shah, Sayyed Muhomad Baksh and Sayyed Shah Hussain.

He went to see the Guru, in a palanquin, as it was the fashion among kings and emperors of those times to move with royal pomp and show, in palanquins, with numerous attendants and servants. After the first meeting it became routine for Pir Budhu Shah to regularly visit the Guru. He no more needed a palanquin to visit the Guru.

The audience with the Guru gave him the peace of mind which the study of religious books, prayers and meditation had not given. His mind was cleared of all doubts after exchange of views with the Guru. The difference of 'That is yours and this is mine' had disappeared from his mind; the Pir could clearly see that everything belonged to the one God, by the time he left for Sadhaura.

Once Peer Buddhu Shah was staying at Sadhaura when he was visited by 500 soldiers of Aurangzeb army who had been fired from his military (because they were shias Muslims) and it was ordered that no one should employ them in any army. They requested peer Buddhu Shah that they are disable now as they have sold all their belongings for the sake of food and the situation is that now that they have to sell their weapons too to survive.

They wanted to enter into the army of such a man who was not scared of Aurangzeb. Peer Buddhu Shah took the Pathans to Guru Gobind Singh and asked Guru sahib to engage them in his army. At his recommendation, that the Guru engaged 500 Pathan soldiers under the command of four leaders, Kale Khan, Bhikham Khan, Nijabat Khan and Hayat Khan (Omar khan) who were to be paid Rs.5 and the other soldiers were to be paid Rs.1. They were all trained by Guru sahib.

Soon, there was a battle between the Guru and the Hill rulers who started the battle as they were scared by the gathering strength of the Guru's community and the bold activities of Guru sahib. With this the Pathans who had been introduced by Pir ji into the Guru's army started to retrieve away from the Guru's force. They were leaving the army giving various excuses. Guru sahib did not pressurised them and said they could leave and go if this is what they wanted. One Pathan, Kale Khan did not leave Guru sahib. Guru sahib wrote a letter to Peer ji to bring to his attention the fact that the Pathans introduced by him and who had been drawing salaries from the Guru's darbar were now betraying the cause when there was a serious need by the Guru.

In 1688, during the Battle of Bhangani when Guru Gobind Singh was attacked by a combined force of the hill chiefs led by Raja Fateh Shah of Srinagar (Garhwal), all the Pathans with the exception of Kale Khan deserted him and joined forces of the attacking hill chieftains. The Guru conveyed the news of the treachery to Pir Buddhu Shah, He came to realise that the Guru's fight was not for any kingdom but against the tyranny which was being perpetrated against the poor people. Religion was being used as an excuse to commit tyranny. Peer ji immediately rushed to the Bhangani, and joined the Guru forces on the battlefield.

When Pir Budhu Shah came to know about this disloyalty of the Pathans, he came to the Guru's aid with his seven hundred of his own followers, four sons and two brothers. Guru was very happy to see Peer Buddhu Shah's followers fighting against hill chiefs as they were not professionally soldiers but ordinary people. Guru sahib felt very happy seeing the devotion of peer Buddhu Shah and his followers. Many of the Pir's disciples as well as two of his sons, Ashraf and Muhammad Shah, and his brother, Bhure Shah fell in the action. 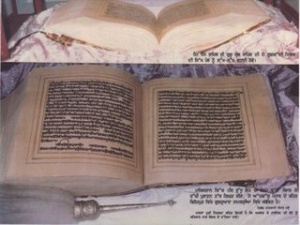 After the battle Guru Gobind Singh offered rich presents to the Pir which who politely declined to accept. However he, as the tradition goes, begged the Guru to bestow upon him the comb from his hair and the turban he was going to tie. The Guru gave him the two articles and a small kirpan or sword which the Pir and his descendants kept in the family as sacred heirlooms until Maharaja Bharpur Singh of Nabha (1840-1863) acquired them in exchange for a jagir (a land grant/estate).

The personal items of Guru Gobind Singh that the Maharaja traded for the jagir are still preserved in the family's palace at Nabha (in the Punjab).

The Rajput chiefs defeated at Bhangani remained hostile towards Guru Gobind Singh, and wished to evict him from Anandpur to where he had returned. To solicit help from the imperial government, they sent to the emperor reports describing the Guru as a dangerous rebel.

Complaints also reached the authorities against Pir Buddhu Shah who had rendered assistance to the Guru. The Faujdar of Sirhind, under whose jurisdiction the parganah of Sadhaura then fell, directed a local official, 'Usman Khan', to chastise the Pir. Usman Khan was already against Peer Buddhu Shah as he already played many tricks against Buddhu Shah to try and kill him. The latter marched on Sadhaura, arrested Buddhu Shah, took him to the forest tortured him and executed him on 21 March 1704. The local people and follower of peer sahib were very sad with such incident but they were scared of Usman Khan and his force. 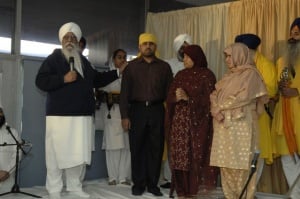 When Banda Singh Bahadur came to know of this incident that Peer Buddhu Shah had been executed because he helped Guru Gobind Singh in the battle of Bhangani, he avenged the Pir's execution in 1709 by storming Sadhaura and killing Usman Khan. Pir Buddhu Shah's descendants migrated to Pakistan in 1947. Their ancestral house in Sadhaura has since been converted into a Gurdwara named after Pir Buddhu Shah.