From SikhiWiki
Jump to navigationJump to search
Sikhism 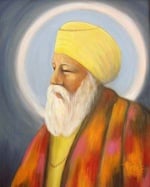 Sikhism is the youngest of the world religions; it is barely five hundred years old. Its founder, Guru Nanak, was born in 1469. Guru Nanak spread a simple message of "Ek Ong Kar": we are all one, created by the "One Creator of all Creation".

This was at a time when India was being torn apart by casteism, sectarianism, religious factions, and fanaticism. He aligned with no religion, and respected all religions. He expressed the reality that there is only one God and many paths, and the Name of God is Truth, "Sat Nam".

Guru Nanak's followers were called Sikhs -seekers of truth. He taught them to bow only before God, and to link themselves to the Guru, the Light of Truth, who lives always in direct consciousness of God, experiencing no separation. Through words and example, the Guru demonstrates to followers how to experience God within themselves, bringing them from darkness into light.

The first Sikh Guru was a humble bearer of this Light of Truth. He opposed superstition, injustice, and hypocrisy and inspired seekers by singing divine songs which touched the hearts of the most callous listeners. These songs were recorded, and formed the beginnings of the Sikhs' sacred writings, later to become the "Siri Guru Granth Sahib". ....Continued