From SikhiWiki
(Redirected from Kabir)
Jump to navigationJump to search

Bhagat Kabir (Gurmukhi: ਭਗਤ ਕਬੀਰ) was a Devotee and Spiritual Poet lived in Uttar Pardesh, India. He was a strict monotheist and follower, probably founder, of Gurmat. In Guru Granth Sahib, There are 227 Padas in 17 ragas and 237 slokas of Kabir.

Kabir was born in Muslim family. He is revered by Hindus, Muslims and Sikhs. He played the role of a teacher and social reformer by the medium of his writings. Like other Devotees, Kabir did not believe in Ritualism, the worshiping of Dieties, Brahmanism, Caste System and illusioned concepts of Hindu and Muslim priests. The Kabirpanthi sect which follow the teachings of Kabir, referring to him as their guru.

Sikhs also follow the teaching of Kabir, as in Gurmat, Kabir, Nanak, Ravidas, Bhatts all are same and all are treated as Guru and Sikhs bow before Guru Granth Sahib which include the teaching of many who had similar thoughts about God.

Birth
Many Views are their regarding life history of Kabir:

In Benaras
Brahmanism
In the fifteenth century, Benaras was the seat of Brahmin orthodoxy and their learning center. Brahmins had a strong hold on all the spheres of life in this city. Thus Kabir belonging to a low caste of Julaha had to go through an immensely tough time of preaching his idealogy. Kabir and his followers would gather at one place in the city and meditate. Brahmins ridiculed him for preaching to prostitutes and other low castes. Kabir satirically denounced Brahmins and thus won hearts of people around him. There is no doubt that the single most famous important person from the city of Benaras today is none other than Saint Kabir.

Even though he was in Banaras (Shivpuri), he had not found Gurmat knowledge- all he found in Shivpuri was a bunch of hypocrites, (Sagal Janam Shivpuri Gavaya), there he wrote Bijak. He went to Maghar. There he founded Gurmat (meaning, "in company of holy men") and again wrote Bani which is present in Guru Granth Sahib. He preached the same bani when he returned to Benaras. He died at Magahar.

Although Ramanand Ji was his outer Guru, ultimately it was Kabir who gave Ramanand Ji true knowledge. In fact, in the previous 3 ages, he revealed his names as: Sat Sukrit, Munindra and Karunamaya.

Muslims Invaded Benaras
Benaras was devasted by an attack by a Muslim invader Tamur Lang or "Tamur the lame" during his time. Kabir also denounced mullahs and their rituals of bowing towards kaba five times a day. Because of open condemnation of established and popular religoins, Kabir became an object of the wrath of both Hindus and Muslims in and around Benaras. Kabir travelled in and around Benaras to preach his beliefs.

He is the first Perfect Master to have revealed the secrets of the entire creation to world at large (see his two verses, both entitled: "Kar Nainon Deedar"). He met with opposition from Pandits and Maulvis alike.

Sultan Sikandar Lodi attempted to punish him by various means such as by drowning, by fire and by having him trampled under an elephant's feet. His verses, though encompassing the highest secrets of Sant-Mat, clearly remain close to the common man's heart even today. He often uses strong language to denounce the prevalent ritualism. Of his works are 'Bijak', 'Granthavali', 'Shabdavali' and 'Anurag Saagar'. The King of Benaras was among his disciples. He had a galaxy of renowned disciples such as: Dharamdas Ji, Mir Taqi, Ganaka Ji, Pipa Ji, Dhanna Ji and Sadana Ji.

Death
It is said that, when he headed his way for heaven, a tussle took place between the Hindus and Muslims over the issue of performance of the last rites. Eventually, in the memory of the great Kabir, his tomb as well as a Samadhi Mandir were constructed, which are still standing erect next to each other at Maghar. 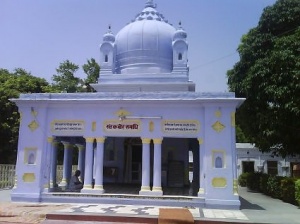 Wasting of Life in Kashi and Recieved Gurmat from Maghar

How he Attains Gurmat? 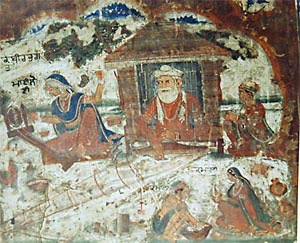 A rare fresco depicting Bhagat Kabir weaving at his traditional 'khaddi' and Mai Loi spinning. The picture that once adored the walls of Akal Takht was destroyed when its building was pulled down in January 1986.

Not all of Bhagat Kabir's bani was incorporated into Guru Granth Sahib by the 5th Guru, Guru Arjan Dev ji. The selections were passed down to the 5th Guru from 1st Guru, Guru Nanak Dev ji in his janamsakhis. Bhagat Kabir ji's bani can be found in the following angs (pages):