Sadhna Bhagat(PA: ਸਧਨਾ), also called Sadhna Qasai, was a North Indian Muslim poet, Saint Mystic and one of the devotees whose hymn was incorporated in Sri Adi Granth Sahib. Venerated in region of Punjab, among Sikhs, his devotional hymn and intellection within is widely quoted by most of preachers. Being butcher by profession, he was always annoyed by Religious Scholars, who keep such thought that a butcher could not attain spiritual enlightment. His one hymn is present in Adi Granth Sahib, in Raga Bilaval[1], in which he explained that believing in Karmic thought comes to an end after attaining spiritual wisdom (Gurmat) in addition to it he explained to remove an inflated feeling of pride within ourselves to know the Supreme. Sadhna travelling from Sindh reached Panjab during his last days of his life and preached around. At Sirhind, he breathed his last where a historic Mosque was built in his memory and preseved by Punjab Government. His followers are called Sadhna Panthis.[2]

Sadhna is considered to be a contemporary of Bhagat Namdev[2][3]. Satgur Ravidas, who studied Satgur Sadhna hymn admired him in his own hymns, as given below:

Sikhs admire and follow the teachings of Sadhna. On Gurmat, Kabir, Nanak, Ravidas, Bhatts etc. all are same and all are treated as Gurus - "spiritual guides". Sikhs bow before Guru Granth Sahib which include the teaching of many who had the same thoughts and views about Almighty. Almighty himself spoke through his Bhagat's, revealing the holy Hymn.

He was born in 1180 AD at village Sehwaan in Hyderabad Sindh province in a Muslim family[4][5][6]. As ancestors were butchers by profession, he continued the family profession of slaughtering goats and selling meat.

Sadhna got "Shaligram Shilas" and used them, as weights, in his profession i.e Butcher. Shila refers to a Vaishnava (Hindu) aniconic representation of Vishnu, in the form of a spherical, usually black-coloured stone found in the sacred river Gandaki, The Shilas (Ammonite fossils) are worshipped as manifestations of Vishnu Himself, identifiable from other stones by special markings, believed to resemble Vishnu's paraphernalia such as mace, conch, lotus and disc (chakra). Sadhna annoyed Vaishnav Sadhus and Pundits with this act.[4]. On one side, He was of lower profession and caste, on other side, he belittling their idol worship, by using idol in flesh of animals which is consider as sin by them. Those religious scholars always had a discourse with him, in which Sadhna always outcome.

It is recorded that one of Vaishnav Saint took Shaligram Stones with them. Sadhna had no issues with this and gave them calmly. Vaishnav saint continued worship Shaligram but got no internal pleasure and extreme wisdom, as he have seen in state, behavior and thoughts of Sadhna. With dashing hopes he returned Shaligram Stones, the Weights of Sadhna back. [7] Sadhna preached that "Shaligrams Stones" does not have god as these are lifeless stones, what spiritual life they can give to living being. 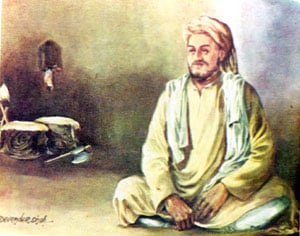 It is recorded in few historical sources, that Once, in evening, Sadhna was washing up and cleaning his shop before closing, a customer came and asked for leg of mutton. Sadhna replied that he is just closing the shop and will give leg in morning. Customer urged that he required it badly and said not to cut whole goat and just cut the leg of it and give to him. Pressed by the customer, Sadhna went near the goat with a hatchet. As he approached the goat, he felt as if the goat was laughing. This shocked Sadhna.

Then the goat guided him that O' Sadhna, in your worldly greed, today you are going to open a new account of pain and misery. We have been going through many thousands of cycles of births and deaths, but never before has any of us cut a limb off while the other was still alive and he is beginning a new level of cruelty. At this point, the hatchet fell out of Sadhna's hand and he turned to the customer to tell him of his helplessness. But there was no one there. He did not find any customer there. A thought came to Sadhna's mind that It was the Lord Himself Who had come to reveal Himself to his devotee in the form of a customer. It is said that he left profession of butcher

Acc. to few scholars, this story is obscure at many points:

As Sadhna was young and good looking with strong body, during his travels, his looks please a young married Brahmin lady, who wanted to have sex with him. Sadhna said that he could not have relation with anyone out of his marriage moreover he could not maintain such relations with a married lady. She thought sadhna might be fearing of his husband. Without understanding Sadhna thoughts, She killed her husband and told Sadhna. Sadhna got shocked with her attitude left the area after sermonizing her. The lady felt ashamed, she burnt herself on husband's funeral pyre, so that people continued thinking her to be Sati-Savitri.

Sadhna quoted No one knows the ways of women, she kills her husband and became a sati, which then became popular as proverb and used by many poets and writers later on[8][9][10]

According to few authors, He came to Punjab after this incident. [4]

Another view exist that woman complained Sadhna at local adminstration. Sadhna was arrested and taken before a magistrate. The judge sentenced Bhagat Sadhna Ji to have his hands cut off. The punishment was duly carried out, and Bhagat Sadhna Ji was then discharged. He set out without a frown on his forehead notwithstanding his barbarous mutilation. Bhagat Sadhna Ji's devotions proved so successful that it is said, akaal purakh blessed him with new hands which sprouted from his body[11][12] but this claim is highly vague.

Sadhna has travelled through various parts of Indian subcontinent and possibility is that he also met and accompanied Bhagat Namdev. Bhagat Ravidas mentioned his name in his hymn with other Devotees, which means he was one of known Gurmukh of the times. The people who followed Sadhna are known as Sadhna Panthis. Sadhna Panthi is considered as Vaishnav Sect, but Sadhna does not hold views of Vaishnava Sect. Even every devotee whose hymns are incorporated in Adi Guru Granth Sahib are wrongly called Vaishnav Saints or followers of Vaishnavism, by some scholars. This is practically wrong because of difference in thoughts in their hymns and Vaishnav tradition.

Sadhna has preached Gurmat in regions of Punjab and Uttar Pardesh.

Bhagat Sadhna's bani can be found in the following ANG(page) of Guru Granth Sahib:

Some key concepts to understand in hymn are:

No Concept of Vishnu

The very first line is interpreted, not in context with gurmat:

In previous Interpretations, the interpreters moved out of subject of Adi Granth Sahib and blend Vaishnav mythology with Gurmat thought, especially Pundit Tara Singh Narotam(Fareedkoti Teeka), who is followed by others. There is a mature thought within Sikhs, that Words and concepts in Gurbani are defined well in gurbani itselef and every hymn is interrelated. While interpreting some typical words, concepts and depth, interpreters mix up perplexing mythology with the Gurmat thought, and bring Sikh thought back to thoughts of religious scholars, who were feeding on the souls, by giving them wrong knowledge about Spirituality. In the whole hymn, Sadhna mentioned no where about Vishnu. As he have only one hymn, situated in Adi Granth, and there is utmost chance of misinterpretations, when we use mythology or other thoughts while answering it so we take references from his contemporaries and writings of other Gurmukhs in same Granth, tackling the same subject.

The above line is related to soul, who take form for developing her intellect(Buddhi), who became self willed and selfish, when go along the way of Gurmat is protected by lord itself.

Some brief about Sadhna bani 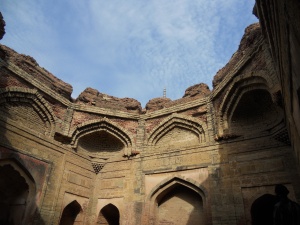 The beginning of this shahbad is talking about the son of a poor man who heard that a king's daughter wanted to marry Vishnu. This young man then dressed up to look like the God Vishnu. The princess on seeing this youngman fell in love with him.

The poor man's son who was dressed up as Vishnu, heard what the princess was saying. He got very worried and scared. What could he do, he wasn't the lord vishnu and possessed no power to defend himself let alone a whole kingdom. As a consquence of this, the boy fell to the ground crying and begged the Lord Vishnu to save him and everyone in the kingdom.

The boy prayed with so much devotion and faith and love, that Vishnu listened to his prayers and helped the army of the girl's father defeat the much larger army of the invading king. Vishnu as a result saved all the people of the kingdom, including the boy who begged for his mercy.

This Shahbad is a conversation that Bhagat Sadhna Ji is having with Waheguru about his present situation.

In the first two lines of this shahbad, Bhagat Sadhna Ji is narrating the story above to Waheguru. He is asking Waheguru why he hasn't come to save him when he came and saved the poor man's son:

Waheguru told Bhagat Sadhna Ji that it was written in Bhagat Ji's destiny that he would die this way.

Bhagat Sadhna Ji then repeated the next two lines. In these next two lines Bhagat Ji is asking Waheguru why he did not change his destiny so he wouldn't have to suffer such a horrific death. The lion is a meant to represent Akaal Purakh and the Jackal is a representation of the King who had ordered the execution of Bhagat Sadhna Ji in this way

Akaal Purakh hearing the pleas of Bhagat Sadhna Ji then told him, that after death he would be given salvation and a place in Sachkhand.

Bhagat Sadhna Ji then replied in the next two lines of the Shabad:

On hearing this Waheguru told his beloved Bhagat Ji to smile and be in chardee kala as he was about to merge with his maker.

Bhagat Ji then uttered the last two lines of the Shabad just before he went back home:

This one Shabad of Bhagat Sadhna in the holy Guru Granth Sahib is written in the Bilawal Raga; it is prayer to God to protect the honour of His devotees. In the SGGS on Page 858:

ayk boond jal kaarnay chaatrik dukh paavai. paraan ga-ay saagar milai fun kaam na aavai. ||2||
For the sake of a single rain-drop, the rainbird suffers in pain. When its breath of life is gone, even an ocean is of no use to it. ||2||

paraan jo thaakay thir nahee kaisay birmaava-o. bood moo-ay na-ukaa milai kaho kaahi chadhaava-o. ||3||
Now, my life has grown weary, and I shall not last much longer; how can I be patient? If I drown and die, and then a boat comes along, tell me, how shall I climb aboard? ||3||


There is also a reference to Bhagat Sadhana together with several other Bhagats in the SGGS on page 1106:

The Mosque of Sadhana Kasai is situated in north-west of the Sirhind-Ropar Railway Line, with railway line. The entire mosque is built of Sirhindi bricks. The paintings in the mosque represent the 'T' art form.