Bhagat Namdev at the Temple 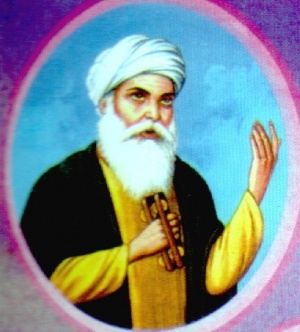 Once a king in India went to Guru Nanak Dev Ji and asked: "O Guru! As you told us, God Himself supports His true worshipper, but God has so many apostles, why does He support Himself? Why does He not send His apostles to help the worshipper?"

As he said this, his own son who was playing on the bank of a river nearby slipped into the river. The king did not wait for a second and jumped in the river as well to save his child.

After saving his child he returned to the Guru. The Guru asked: "My dear friend, you were sitting here with me a minute ago and why did you jump in the river?"

The king explained that his son had slipped into the river and he went to save him.

Then the Guru asked: "Dear friend, you have so many servants, why did you jump in the river yourself? Why did not you send your servants to save him?"

The king said: "By the time I would have asked my servants, he would have drowned. I love my child very much and do not want to lose him at any cost."

Then Guru said: "My dear friend, God loves His worshippers the same way as you love your son. That is why He Himself saves His true worshipper."

Such a worshipper was Namdev. For all of his life, Namdev had worshipped God and had faith in Him for each and every moment. He did not worship anyone else but the one immortal God.

He says : "O my tongue, other occupations are false. The state of Nirvaanaa comes only through the Lord's Name. ||2|| The performance of countless millions of other devotions is not even equal to one devotion to the Name of God" (Guru Granth Sahib, page 1163).

The materialistic things would not deter Namdev from the spiritual path to meet God. Once while sewing, he wrote: "My needle is of gold and my thread is very expensive but my mind is attached to God" (Guru Granth Sahib, page 485).

He cared neither for gold nor silver; he was in love with God. Even though as a result of his true worship he had become a highly spiritual person, he was still completely devoid of pride (or ego). Namdev knew that God only care for the person who recites His name and remembers Him all the time.

Once Namdev went to Aundha Nagnath Temple (also sometimes written as "Avanda Nagnath Temple" ) situated in the state of Maharashtra in India. The Hindu priests of that temple believed in the caste system. After reaching the temple, Namdev sat and started worshipping God but the Hindu priests grabbed his arm and drove him out of the temple. The priests said that Namdev could not visit the temple because he was of a low class.

Namdev also said: "O Lord, please do not forget me because if You forget me then where should I go. There is nowhere else to go and no one else to believe in except You."

He further prayed: "Please do not forget me, do not forget me, please do not forget me, O Lord. The temple priests have doubts about this, and everyone is furious with me. Calling me low-caste and untouchable, they beat me and drove me out; what should I do now, O Beloved Father Lord? If You give me salvation after I am dead, no one will know that I attained salvation. These Priests, these religious scholars, call me low-born; when they say this, they tarnish Your honour as well. You are called kind and compassionate; the power of Your Arm is absolutely unrivalled" (Guru Granth Sahib, page 1292).

"As Naamdev uttered the Glorious Praises of the Lord, the temple turned around to face the Lord's humble devotee" (Guru Granth Sahib, page 1164).

"The Lord turned the temple around to face Namdev and its back to the priests" (Guru Granth Sahib, page 1292).

That temple is still rotated 180 degrees as can be seen at the site - Aundha Nagnath Temple. In most Hindu temples, the water pool ("kuub") is normally located at the front of the mandir; at this site, it can be seen at the back of the temple. Further, most temples face east since that is the most auspicious direction in the Hindu faith as the Sun rises from the East and the Sun is considered the destroyer of darkness and the giver of life. The Aundha Nagnath temple faces West.d.

This is the symbol of the true love of God towards His true worshipper.