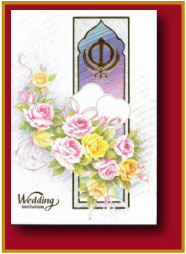 If you are invited to a Sikh wedding, don’t panic!

This article gives a brief guide on what to expect, what you should wear and a feel of the ceremonies that will take place. Most Sikh weddings are great fun occasions and provided that you are properly prepared, it should be a great day out!

These weddings events are big, boisterous, chaotic events, with lots of twists and turns during the day, tons of food, lots of music and much energetic dancing. You'll have a hard time figuring out what's going on; just go with the flow of things and enjoy the events. As a guest you will be honoured by the family.

A wedding day will be a long eventful and exciting affair - so be prepared to start early and finish late. Have a good rest the previous day and be fresh and relaxed for the wedding day.

As a general rule the morning and early afternoon are taken up by the religious ceremony at the Sikh temple called the Gurdwara. While, these days the afternoon lunch is held at a different venue away from the Gurdwara.

This is a departure from earlier traditions when the lunch consisted of a sumptuous vegetarian langar at the Gurdwara. There is some pressure from Sikh religious organisations for this tradition to be restored.

However, you will have a lot to take in through the day and a huge amount of rich and varied foods to consume - so be careful, take it easy!

One Soul in Two Bodies

The Sikh wedding ceremony is known as "Anand Karaj" which means 'Blissful Union". The Sikh marriage is a very colourful and unique ceremony in which two individuals are joined in a partnership of two equals.

It is not merely a physical and legal contract but a sacrament - a holy union between two souls. The spiritual goal of any Sikh is to merge his or her soul (atma) with God (Parmatma) and in marriage, the couple vow to help each other towards this goal.

The early part of the day is devoted to the religious ceremony which almost always takes place in a Sikh Gurdwara (Sikh temple). 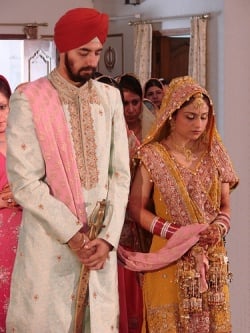 If you’re invited to the formal religious ceremony and you are unable to wear a salwar kameez or sari or ethnic clothes, then bear the following in mind.

Colours to wear It is a tradition in Sikh culture to wear vibrant and joyous colours to such occasions. You will witness bright reds, radiant blues, deep green and a huge mixture of these and others colours among the ladies. Although, it is better to avoid pure white and black at the actual religious ceremony there is nothing sacrosanct, but you may feel a little out of place in some situations. It is easier for men - they may get away with a black suit at the religious ceremony. Dark colours for men may be OK.

Bright colours are certainly considered most auspicious at Asian weddings functions; pastels are also acceptable, especially in the summer. Try not to wear bright red as this is traditionally reserved for the bride and you wouldn’t want to outshine her on her special day! 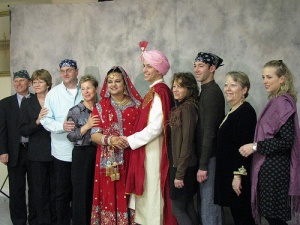 At a Sikh wedding you will be require to cover your head when you are in the Gurdwara (temple). Carry a long scarf or a pashmina stole, which can also be used to cover up bare shoulders or arms, if necessary. Men usually wear the head covering provided at the temple or carry a large white or coloured handkerchief to place over their head.

Also at the religious places you will be required to take off your shoes and place them in the designated space before you enter the sanctified area. While some places may require you to be barefooted, usually wearing socks or stockings is acceptable.

However, it is possible to attend just the formal religious wedding itself or just the lunch and gathering in the afternoon. Check with the host to clarify the exact programme.

The day usually starts early for the "Barat" which is the term used for the Groom’s side or the party of people accompanying the Groom.

If the groom lives far from the bride's house, the Barat may depart early in the morning. It is common for the Barat to set off from the groom's house at 8am. The Barat will then travel to the local area where the bride lives. 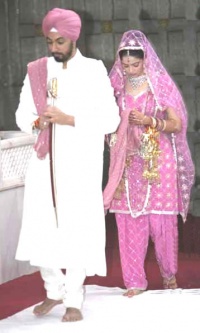 The Couple slowing walking clockwise around the Guru Granth Sahib

The Party and Closing

It is not normal for the guests to take gifts for the Bride or Groom unless you are a very close relative. There is a ceremony called "Sagaan" which takes place at the end of the religious ceremony when most guests will gift money to the wedded couple. The amount is normally £5 or £10 (about $10, normally a low value note in your local currency) each to both the groom and bride.

The modern alternative, which is gaining popularity is to include the money in a congratulation card and give this to the mother of the bride or groom depending on which party invited you to the wedding. Unless you take the latter route, you will need to queue up at the conclusion of the religious ceremony (sometime for over 30 minutes) to give the 'sagaan' to the bride and groom.