From SikhiWiki
(Redirected from Kameez)
Jump to navigationJump to search 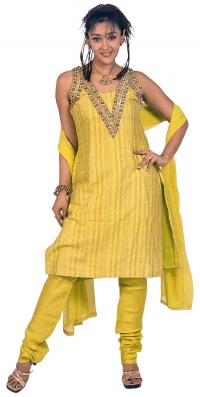 a modern design of a Salwar kameez

Salwar kameez (also spelled shalwar kameez and shalwar qamiz) is a traditional style of dress worn by both women and men in India and other South Asian countries. It is also known as a Punjabi suit because it is believed to have originated in the Punjab state in India and Pakistan. The garment is made up of two separate parts. Salwar refers to the garment worn around the legs - the trouser-like part and kameez refers to the top part of this 2 piece garment, the shirt or tunic like part of the set worn over the upper part of the body and arms.

Salwars or shalwars are loose pajama-like trousers. The legs are wide at the top, and narrow at the bottom. The kameez is a long shirt or tunic, of which the lower part of the side seams (known as the chaak) are left open (un-seamed) below the waist-line, which gives the wearer greater freedom of movement.

Salwars are pleated at the waist and held up by a drawstring or an elastic belt. The pants can be wide and baggy, or they can be quite narrow and made of fabric cut on the bias. In the latter style ( narrow and tight), they are known as churidars, which are often left with extra length that gathers in wrinkles above the ankles. The kameez is usually cut straight and flat; older kameez use traditional cuts; modern kameez are more likely to have European-inspired set-in (ragland) sleeves. The tailor's taste and skill are usually displayed not in the overall cut, but in the shape of the neckline and the decoration of the kameez.

When women wear the salwar kameez, they usually wear a long scarf or shawl called a dupatta or Chunni around the head or neck. For Muslim women, the dupatta is a less stringent alternative to the chador or burqa (see hijab and purdah). For Hindu women, especially those from northern India (where the salwar kameez originated) it is the most popular form of dress. The dupatta, aside from its use for added warmth or protection against the wind, is also useful when decorum dictates that the head must be covered, as in a Gurdwara or temple or in the presence of elders. For many women, the dupatta is simply a stylish accessory that can be worn over one shoulder or draped around the chest and over both shoulders.

Modern versions of the feminine salwar kameez can be much less modest than traditional versions, as shown in the photo. The kameez may be cut with a plunging neckline, sewn in diaphanous fabrics, or styled in sleeveless or cap-sleeve designs. The kameez side seams may be split high up to the waistline and, it may be worn with the salwar slung low on the hips. When women wear semi-transparent kameez (mostly as a party dress), they wear a choli or a cropped camisole underneath it.

In Afghanistan and Pakistan, it is often the preferred garment of both sexes. In Bangladesh and India, it is most commonly a woman's garment.