From SikhiWiki
(Redirected from Darbar sahib)
Jump to navigationJump to search 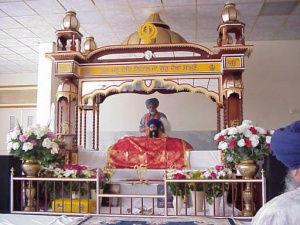 Darbar Sahib refers to the Main Hall within a Sikh Gurdwara. It also refers to the central building at Harmandir Sahib, Amritsar. In the phase "Darbar Sahib", the word Darbar means Court and so the terms together refers to the "Guru's Court". This is the hall where the current and perpetual Guru of the Sikh, Sri Guru Granth Sahib is placed on a Takhat or Throne in a prominent central position in the hall.

The holy book, Sri Guru Granth Sahib or SGGS is placed on a dominant platform and covered in very beautiful and attractive coloured fine silks and cloth. The platform is always covered by a canopy, which is also decorated in expensive and very attractive coloured materials. Sometimes an additional canopy structure with a platform called a Palki Sahib is used as a throne for the Guru. The Sangat or Congregation sit facing the Sri Guru Granth Sahib on carpeted floor. Although not a strict requirement of the religion, it’s become a fashion for the males and females to sit on opposite sides of the Darbar Sahib. The floor of the hall is covered with carpet which in turn may be covered with white cloth sheets.

Before a devotee or guest enters the Darbar Sahib, he or she must first take off their shoes and cover their head. Special racks are provided outside the Darbar Sahib to remove and store shoes. Most Gurdwaras also provide colourful cloth material to cover ones head. You must not enter the hall if you are under the influence of intoxicate or have just been smoking. As you may want to sit on the carpeted floor, you should wear suitable loose clothing. 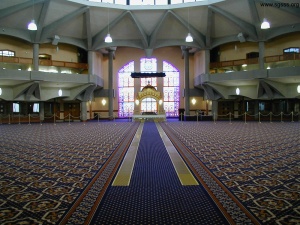 On entering the Darbar Sahib, the devotee will walk slowly and with humility towards the Guru’s Takhat. In front of the Takhat, the devotee will say a small Ardas or prayer standing in front of Guru ji, and then place a small offering to the Guru. This is normally small change of coins which is placed in a Golak or Treasure Chest. The disciple will then bow to the Guru, touching the forehead to the ground for a few seconds and then rise to the standing position and say a small prayer to Waheguru. If you are not a Sikh, it is acceptable to walk to the Guru Ji Takhat, just bow your head and then join the rest of the congregation. Having done the Nimashkar or Greeting to the Guru, the devotee will walk gently to the correct side of the hall – either to the right or left depending on the gender of the devotee. However, there are no strict rules on gender segregation in most Gurdwara and if there is only a small congregation, mixed sitting policy may apply.

On one side of the Guru’s Takhat, you will normally find a small stage which would be used by the Kirtaneaa or Singers, who on special occasions perform Kirtan or Hymn singing. On the other side of the Takhat, you may find a rostrum from where announcements are made by the organisers, who would stand at this stage to make the broadcast.