From SikhiWiki
(Redirected from Sis Ganj)
Jump to navigationJump to search 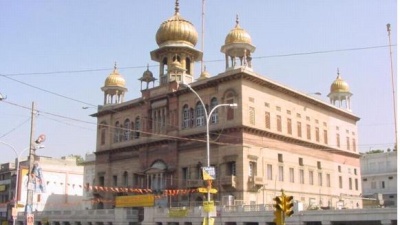 Gurdwara Sis Ganj Sahib is built at the site in the Chandni Chowk area of Old Delhi, where the revered ninth Sikh Guru, Guru Tegh Bahadur, was beheaded, on Wednesday, November 24, 1675, on the orders of the Mughal emperor, Aurangzeb, for refusing to convert to Islam.

Before his body could be quartered, further disrespected and exposed to public view, it was recovered under the cover of darkness caused by a severe dust storm by one of the Guru's disciples, Lakhi Shah Vanjara, who then set his home alight to cremate the Guru's body.

Similarly, the 'Sis' (head) of Guru Tegh Bahadur was recovered and taken to Anandpur Sahib by Bhai Jaita, another Sikh of the Guru where it was cremated by the Guru's young son, Guru Gobind Rai.

Across the road and facing the Gurdwara Sis Ganj is the site of the Kotwali (police station), where the faithful disciples of the Great Guru Bhai Mati Das, Bhai Dyala and Bhai Sati Das were tortured to death at about the same time. 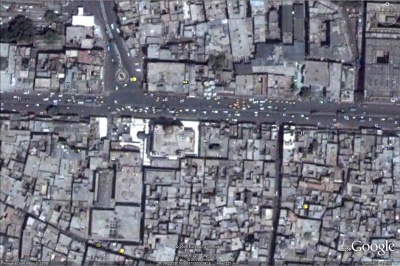 The twin city of Delhi and New Delhi is not only the capital of India, but also has become the central place and the pivot of all political activities. It has gained importance since Independence as the seat of the biggest democracy of the world.

There are nine historic Gurdwaras, associated with important events which occurred here in this city. Events which had a great bearing on the history of Punjab and of India changing its course and direction. Consequently it has become a renowned place of pilgrimage, sacred to the Sikhs as at least five Sikh Gurus; Nanak Dev, Hargobind, Harkrishan, Tegh Bahadur and Gobind Singh spent time in Delhi.

It was in this city that the young Guru Harkrishan, who ascended to his heavenly abode here of smallpox contracted in the ancient city, passed the Guruship to someone he called "Baba Bakala". "Baba Bakala" turned out to be his elder brother Tegh Bahadur or Tegh Mal who later, as previously mentioned, became the second Guru of the Sikhs to die here in Delhi. The last Sikh Guru, Guru Gobind Singh continued the mission to bring peace and freedom to this nation. However, the mission would not be achieved until many thousands of more captured Sikhs met their deaths in Delhi, including Banda Singh Bahadur who dedicated his everything for his Guru and master, Guru Gobind Singh.

In Guru Tegh Bahadur, Banda Singh Bahadur, Jassa Singh Ahluwalia, Bhai Baghel Singh, Bhagat Singhand many others we find the gritty determination to root out the tyranny of injustice from this sacred land of the saints; their blood and sweat soaked into the soil of this historic city. Was it not for these determined souls of the Lord, the city would not have the independence, democracy and freedom that is enjoyed by the city dwellers today - One hopes that this fact will always be remembered by the residence as they go about their daily carefree lives now and in the future.

The village Budhkhalsa where Banda Singh Bahadur camped, is situated along the Grand Trunk Road (Shershah Suri Marg). This great Sikh hero shook the Mughal Empire to its core in Punjab giving crushing blows to the Imperial Army and capturing the tract of land, lying between the Yamuna and Sutlej rivers.

After his defeat in 1716, Banda Bahadur was brought to Delhi as a prisoner along with 1,000 followers, who were beheaded in Gandhi ground opposite Old Delhi Railway Station at a site known as, Qaza1-Gahe Sikhan near Qutab Minar situated in Mehrauli, a suburb of Delhi. Two stone pillars of a gateway overlooking the Dargah of Khwaja Bakhtiar Kakistill still stand as a witness to the martyrdom of Baba Banda Bahadur. Harding Library (now renamed Hardyal Library) stands on this site today.

Nearby a 50 ft. high pillar made of stone with a steep stains, now houses a Gurdwara in memory of the supreme sacrifice made by the Jathedar appointed by Guru Gobind Singh. After his Martyrdom over 100 Sikhs were killed daily for about 100 days.

Every day thousands of pilgrims throng these holy shrines to listen to kirtan (devotional music) from the Guru Granth Sahib.

The wife of Guru Gobind Singh, Mata Sundri and Mata Sahib Kaur (the Mother of the Khalsa), who provided the 'Amrit' that day when the Khalsa was born, lived in Delhi for 35 years after the Guru's death. They issued directions to the Sikh forces from the Gurdwara Mata Sundri, Delhi. This Gurdwara near the Turkman Gate was built to perpetuate their memory.

Sardar Bhagel Singh, the commander of the Kironsinghia Misal, who held Delhi under his sway for some months in 1783, during the time of Shah Alam ll, took special pains to locate the sites of these historical events. He made a great contribution to the Sikh religion by constructing Gurdwaras, over all these historic sites in Delhi.

In March 1783, a large Sikh Army commanded by Jassa Singh Ahluwalia, Bhagel Singh Kironsinghia, Rai Singh Bhangi and Gurdit Singh, Raja of Ladwa, advanced to the imperial capital and attacked the Red Fort. Tis Hazari was so named by Bhagel Singh, because he had used the site as a stable for 30,000 horses of his cavalry.

The Mughal King opened negotiations. The Sikhs received Rs. three lakhs in cash as Nazrana and the permission to build their shrines on the historic sites, where mosques had been built. Bhagel Singh remained in Delhi as the head of 4,000 Sikh troops who built the Gurdwaras.

It is important to mention that when the Sikhs came into power in Punjab, after pushing out the Afghans, they fought pitched battles with the Mughal forces on the sandy beds of Yamuna river, where now stands Indraprastha Indoor Stadium. A small Gurdwara indicates the spot near the Indraprastha power station, where two forces clashed for supremacy.