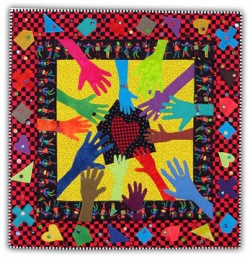 All hands join in

A few years back, I went to my first Charni Lagna ceremony. Charni Lagna – literally, “at the feet of the Guru” is the traditional name of the event where a Sikh formally begins reading from the Guru Granth Sahib.

Like most Sikh ceremonies, it is actually quite simple. After shabad kirtan is recited, an ardaas is offered for the young (or old) Sikh who is beginning their journey with the Guru – then finally, he or she will read the hukamnama.

The ceremony I attended was for an 11-year old girl, who was very excited and worked hard to prepare for this day. After a few shabads were sung by the local jatha and the girl’s friends – one by one, members of the sangat came to say a few words of encouragement. One of her friends was around the same age and similarly went through this ceremony a year prior. She spoke about her own experience reading from the Guru Granth Sahib on a daily basis and how it has changed her life.

Then one of her friends who had yet to take this step spoke of how she was inspired to do so soon. Then came her Punjabi school teacher, then her camp counselors, then other leaders of the community. I noted that neither her parents nor any of her relatives spoke – but instead, they just sat and listened to the members of the sangat, who individually shared such beautiful words of encouragement and praise for this young Kaur, who humbly sat at the feet of the Guru…It was quite powerful.

Finally, as the ardaas ended, there was a rare moment of pin-drop silence in the darbar hall. Then this brave 11 year old girl, surrounded by her proud parents and grandparents, read the hukamnama flawlessly.....I was moved by the whole event.

Immediately after the hukmanama was completed, something remarkable happened.... As she began to turn the pages of the Guru Granth Sahib to the beginning, initiating her first sehaj paath, she began reciting the Mool Mantar aloud. Each time she repeated it, more and more people joined along.

By the seventh or eighth repetition, just about every person in the hall was reciting along with her in unison. It was as though the entire sangat was offering a collective ardaas for this young girl, wishing her well on her journey and praying that she will always keep the Guru close to her.

Although this moment may have just been a short-lived gesture, to me, it was symbolic of something greater. It made me wonder what life was like in the prototypical society Guru Nanak Patshah had created at Kartarpur Sahib. I wondered what role the community played to support and guide the children. I’ve heard the stories of how everyone contributed to the langar, surpluses were shared among all, and everyone did seva for the community to create a socio-economic balance.

But I have to believe that such an idealistic society did not leave parenting simply up to the parents. Instead, perhaps members of the community contributed to the upbringing of its children, and worked collectively to guide them on the right path. I wonder if it applies today…when it comes to our communities children, what is the role of the collective? When a child loses his or her way on the path of Sikhi, we are quick to blame and criticize the parents – but I wonder, is this what Guru Sahib expected of his Sikhs? Is this what he expected of his Gur-sangats? What is our responsibility in all of this?

In the mid-90’s Hillary Rodham Clinton described her vision for the children in America, in her book titled “It Takes a Village.” It spoke to the impact that individuals and groups outside the family have, for better or worse, on a child’s well-being. The saying “it takes a village” actually originated from the Nigerian Igbo culture’s proverb “Ora na azu nwa” which means it takes the community/village to raise a child. The Igbo’s also name their children “Nwa ora” which means child of the community.

Similarly, I believe it takes a village…actually…it takes a sangat to raise a Sikh. I firmly believe the collective has a responsibility to take ownership of our children’s Sikh and Gurmat development. This happens through creating opportunities for learning and empowerment, while also encouraging our young Sikh boys and girls as they achieve milestones on the Guru’s path

What do we learn

So what does this mean to us Langar-ites? Is it enough to spend a week at gurmat camp just to hang out with our friends and call ourselves “counselors”? Or can we make an honest attempt to leave a positive impression on a young child at camp? Could this summer be an opportunity to organize a gurbani veechar, “Big Khalsa Little Khalsa” event, seva project, basketball camp, or just a social trip to the movies or bowling with the local kids from the Gurdwara? Taking a step further, what about attending a kirtan or speech competition, just for the sole purpose of congratulating the 3rd and 4th place kids and those who didn’t place at all. What about simple gestures like reaching out to that struggling teenager whose “on the fence” about their Sikhi, or offering congratulations and encouragement to the young boy or girl who just started wearing a dastaar, or completed charni lagna, or received amrit?

Sikh Youth (and all youth for that matter) have so many influences…from more media sources than ever. Why not take an active role to be a positive one? If not us, than who will?