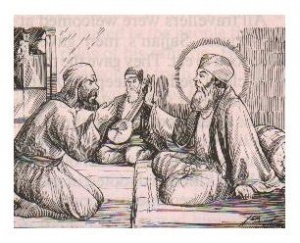 Sajjane was once a good man who had seen the need of a place where weary travellers could stop for a meal and a night's rest; safe from thieves, robbers and wild animals of the night.

His inn was located was located about 9 miles from the village of Talumbha and a mile from Makhdoompura (between Lahore and Multan, which today are in the Multan District of East Punjab, Pakistan. He was good to both his Hindu and Muslim guests and had even built a mosque for the Muslims and a Mandir for the Hindus. His workers had taken care of his vast lands very well, which appeared to have made Sajjan a wealthy and generous man.

By the time that Guru Nanak and Bhai Mardana stopped at his sarai, he had become so well respected in his village that his fellow villagers had added the honorific title of Sheikh to his name.

But slowly Sheikh Sajjan had lost his way and fallen into the world of greed. By the time that Guru Nanak and Mardana stopped at the serai Sheikh Sajjan and his workers had turned to robbery and murder, his guests were stopping for a night of rest, safe from the dangers of the open road, only to be murdered in the night. His sarai's remote location on the outskirts of the closest cities, surrounded by forests, had kept any news of his bad deeds a secret, so people continued to think of him as a good man.

Few people could guess that his wealth was secretly earned by robbing his guests who stopped in, never to leave. In reality Sajjan and his men were killing and robbing their guests, after gaining their trust they would fall upon them in the night, rob them and dispose of their bodies by throwing them down a local well. The Panjabi word Thugi (cunning’, ‘sly’, ‘fraudulent’, ‘dishonest’, ‘scoundrel’) has given us the English word thug.

Gangs would join and befriend travelers in a ritualistic format of murder and robbery of travellers across much of India. The concept of Thuggee is believed to date from at least the 17th century, though possibly as early as the 13th century, through to the 19th century.

Guru Nanak ji came here from Lahore via Pak patan and reached to the Sarai of sajjan.

When Guru Nanak and his companion Bhai Mardana were travelling and spreading the word of God they reached Tulamba in Multan. Guru nanak Sahib Went to Sarai of Sheikh Sajjan, Seeing Guru Nanak ji he thought 'he must be a wealthy man.' He served him and Mardana with great care. Guru ji was aware of what was on Sajjan's mind. Sadly it was an ugly affair. Sajjan said 'O holy man, come and sleep in comfort inside. It's night and quite late besides. Guru ji replied, "Sajjan we shall first sing a hymn in praise of the Lord, Then welcome sleep to dream about the kingdom of God." He began reciting the hymn as Mardana played the rabab. The shabad explained that shiny bronze pots, do cover the fingers with dirty black dots. Those that have not done any good deeds, Are like a garden full of weeds. So it is with white clothed holy men who rob the innocents. They are like pretty storks at places of worship' Whose diet alas includes frogs. To become good and be able to do good in this world, one needs the help of God.'

Hearing this shabad Sajjan knew what it meant, for whom it was. As soon as Guru ji finished the hymn he fell at his feet, begged forgiveness and promised not to kill or cheat. He distributed all his wealth among the poor at hand, and started living like a true Sajjan in that land became the disciple and then preacher and was respected as Sheikh Sajjan.

Sajjan converted his inn into a true dharmsal. Sajjan became a follower of the Guru. Later, during the time of Guru Har Rai, Bhai Jodh, masand of this area, lived at Tulambha. It was his descendants who first established a Gurdwara dedicated to Guru Nanak Dev in 1913. In Pakistan, there is a Gurdwara built in his memory at that place. Guru Nanak Dev University, Amritsar, has named one of its important buildings as “Sheikh Sajjan Guest House”.