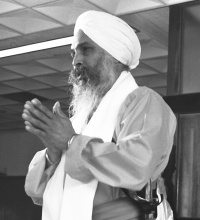 Sarbat da bhala is the final term in the Sikh prayer called the Ardas. The term outlines one of the most important of Sikh principles and is a point that is repeated in the Sikh Scriptures.

Sarbhat dah phalla or Sarbat da bhala is a Punjabi term which means "welfare of all" "may everyone be blessed" or "may good come to all". This is a term which forms an important part of the Sikh prayer called the Ardas. This term reflects an important part of Sikh philosophy. The term establishes a new precedence set by the Sikh Gurus - It encourages and compels the Sikh to ask for the "well being of everyone in the world". In establishing this concept, the Gurus have set a new standard for the Sikhs – not only should the Sikhs pray for their own well-being but also needs to ask for the blessing for "all the peoples of the world".

All Sikhs narrate this prayer called the Ardas (final request/prayer to God) at least twice a day. In the ardas, the Sikhs say the following line near the end of the Ardas:-

(part of the Ardas performed daily by all practising Sikhs)

The Sikh concept of "Sarbaht dah Phahla" which means "blessings for everyone" or literally "May everyone Prosper".

This statement is repeated by all practising Sikhs at least twice daily (if not more) as part of their Nitnem (daily prayers). This concept is central to Sikhism and forms a very important and essential role in the religious philosophy of the Sikh Gurus.

To put this in concise and clear language, it means that the Sikh desires, prays and asks God for the:

A true Sikh selflessly prays daily for "all to prosper". This gesture comes from the clear and pure teaching of Gurbani (Sri Guru Granth Sahib, SGGS) and forms the Gurmat code of conduct. Gurbani tells us that there are no "others". There is only One. The same One God resides within all. We are all the children of that One God. As the potter makes pots of different forms and colors from the same basic clay; and as the goldsmith moulds jewellery of various types, colors and shapes from the same single homogenous material, gold; similarly, we are all born of the same One Light. There is no difference.

Accordingly, by instruction from the Gurus, the true Sikh begs for "the good for all beings" of the world. Because he knows the within each and every one of us resides the same One God – The Sikh should realise that he is "one with the rest". If he does not than he is not a real Sikh, at least not yet. The all-inclusive Gurbani's teachings are wonderful, so Divine and so pure that if the follower meditates on the meaning of the pure Shabad, it takes one to a higher spiritual plane.

When one prays for all (Sarbaht), then the entire universe prays for him! Like all beads are strung on one thread, and all waves are formed from the same one water, so are we all strung on the same One Awareness. Therefore, we are inseparable like the whiteness of the snow, fragrance in the flower, heat in the fire, liquidity of the water, light in the bulb, waves in the ocean, gold in the bracelet, clay in the pot, and rays in the sun. This is why our lives are interwoven with the thread of Divine Love. God is Love. It is this Divine Love that brings harmony between souls. As such, the influence of our daily actions and behaviour spreads in ever-widening circles. As our lives are interwoven, we can each draw the needed strength from the all-pervading Divine Presence within to help each other.

A Mahatama has said that, "The need to feel and express love and compassion for all, with the understanding that we are all part of a greater reality, is the core of the spirituality." How can we experience this underlying Unity or Oneness of the entire creation? "By eradicating egoism", says the Gurbani. Our unripe ego or Haume is that wind which raises up huge waves of different shapes in the vast ocean (worldliness), and makes us look and believe separate or different from everyone else! Therefore, Gurbani tells that this ego (deluded mind) must disappear. The ego is selfishness, the feeling of "I, me, you". Without annihilation of this ego, there cannot well up the true selfless love within. In other words, so long as ego is there, there cannot be the full Awakening within. Therefore, mere mechanical or robotic repeating of " Sarbaht dah Phahla " will not do the trick; one must live by it at each moment or breath. Such lasting inner transformation takes place in the real Holy Company called "Sadh Sangat" in the Gurbani.

If we do not recognize Oneness, it is not the fault of the religions or spirituality. The problem lies within the human mind, which is inflicted with menacing ego — lust, anger, greed, attachment, self-conceit, jealously, stubbornness etc. A Great Soul observes, "Undoubtedly, most of the religions are led by intellectuals" In turn, most of the intellectuals are led by ego or Haume for the intellect is the seat of the ego. The ego-mind is doubting, suspecting, turbulent and unsteady, which craves for money, name, fame, power, attention and status. Due to this ego, we do not properly understand the religious principles which teach selfless love, peace, truthful living, and harmony.

Unfortunately, the ego-mind of the intellectual interpreters of the religions only highlights the external differences, not the underlying principles of Oneness. These so-called torch bearers or custodians of the world religions force their wrong ideas and evil visions on the unsuspecting followers. Thus they misguide them and make them fight for the satisfaction of their own ego. It is like the "blind leading blind". The result is the present day conflicts, chaos, and lack of integrity in the human society everywhere. When we are ruled by ego, we are not concerned about others; we are only concerned about ourselves. Thus ego creates hell within us. That's why Gurbani repeatedly asks us to eliminate this ego and become Gurmukhs (egoless or spiritual beings).

Gurbani also teaches us not to have excessive pride and not to consider ourselves above in status compared to others; instead, one should practice humility (Nimrata. Because naturally when one considers oneself "superior" then it implies that there are "others" and that they are "interior" or at "lower status" (duality). This is again raw ego (Haume) and excessive pride. Such negativity, weaknesses, ideas, and preoccupation of the mind must go. Gurbani tells us that each one of us has the capacity within us to realize the Oneness, Peace and harmony internally — the 'Total Identify. Due to lack of selflessness and proper understanding, however, this capacity to realize Oneness with the Totality remains dormant. However, if we have the determination, proper understanding and correct attitude, we will become Gurmukhs — selfless, spontaneous and loving (Sahaj).

The above has been adapted from the original article written by Sardar T. Singh