From SikhiWiki
(Redirected from Sikh Scriptures)
Jump to navigationJump to search 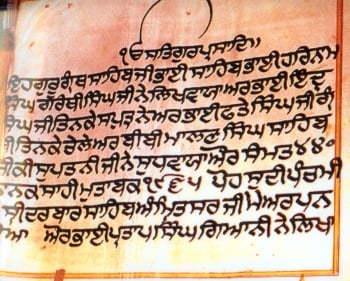 The principal Sikh scripture is the Adi Granth (First Scripture), more commonly called the Guru Granth Sahib. The second most important scripture of the Sikhs is the Dasam Granth. Both of these consists of text which was written or authorised by the Sikh Gurus.

Guru Granth Sahib or Adi Sri Granth Sahib, is more than just a scripture of the Sikhs. The Sikhs treat this Granth (holy book) as a living Guru. The holy text spans 1430 pages and contains the actual words spoken by the founders of the Sikh religion (the Ten Gurus of Sikhism) and the words of various other Saints from other religions including Hinduism and Islam.

The Dasam Granth (Punjabi: ਦਸਮ ਗ੝ਰੰਥ), historically known as Dasven Padshah ka Granth (Punjabi: ਦਸਵੇਂ ਪਾਤਸ਼ਾਹ ਕਾ ਗ੝ਰੰਥ) (Book of the Tenth Emperor), is a scripture of Sikhism, containing texts composed by the 10th Sikh Guru, Guru Gobind Singh. The compositions of the Granth set out the ideas, thoughts and guidelines for the future of the Nanak panth as enshrined in the Khalsa. The Jaap Sahib, Tvye Prasad Sawaiye (Amrit Savaiye) and Benti Chaupai, all compositions from the Dasam Granth, are part of the daily prayers Nitnem of the Sikhs, which serve, as well, as a part of the Sikh initiation Khande di Pahul.

Guru Granth Sahib was given the Guruship by the last of the living Sikh Masters, Guru Gobind Singh Ji in 1708. Guru Gobind Singh said before his demise that the Sikhs were to treat the Granth Sahib as their next Guru. Guru Ji said – “Sab Sikhan ko hokam hai Guru Manyo Granth” meaning “All Sikhs are commanded to take the Granth as Guru” So today if asked, the Sikhs will tell you that they have a total of 11 Gurus. ( 10 in human form and the SGGS).

Therefore, the Sikhs do not regard the Guru Granth Sahib as their "holy book" but as their perpetual and current "Guru", Guide or Master. It was called Adi Granth until Guru Gobind Singh, the tenth and final Guru in human form conferred on it the title of the Guru in 1708, after which it was called Sri Guru Granth Sahib or SGGS, for short. The Granth has 1430 pages and is divided into 39 chapters. All copies are exactly alike. The Sikhs are forbidden from making any changes to the text within this Scripture.

This Granth is the only world religious scripture which was compiled during the life time of its compiler. All other world scriptures were compiled many years after the death of the prophet. The SGGS was compiled by Guru Arjan Dev, the fifth Guru of the Sikhs. The work of compilation was started in 1601 and finished in 1604. The Granth, called by Guru Arjan as "Pothi Sahib", was installed at Darbar Sahib (House of God) with much celebration.

The main banis found here are:

The following languages are found in this Granth:

Dasam Granth - is stated to have been compiled by tenth Guru. The Granth is understood to have been compiled three years after the Guru’s death and it was Mata Sundri the widow of the Guru who asked Bhai Mani Singh, a contemporary of the Guru, to collect all the hymns composed by the Guru and prepare a Granth of the Guru. It was completed in 1711. In its present form it contains 1428 pages and 16 chapters as listed below:

The following are the main banis regularly recited by Sikhs:

The languages used in the Granth are:

Varan Bhai Gurdas is the name given to the 40 Varan (Chapters) of writing by Bhai Gurdas ji. They have been referred to as the "Key to the Sri Guru Granth Sahib" by Guru Arjan Dev, the fifth Sikh Guru. He was the first scribe of Guru Granth Sahib and a scholar of great repute. From his work its clear that he had mastery of various Indian languages and had studied many ancient Indian religious scriptures.

Each of the 40 chapters of "Varan Bhai Gurdas" consists of a differing number of Pauris (sections, paragraphs). The composition is a collection of detailed commentary and explanation of theology and the ethics of Sikh beliefs as outlined by the Gurus. It explains the Sikh terms like sangat, haumai, "Gun", Gurmukh and Manmukh, Sat, Naam, etc. Many of the principles of Sikhism are explained in simple terms by Bhai Sahib and at times in many different ways.