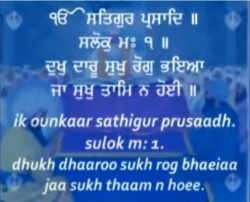 Rehiras Sahib is the evening prayer of the Sikhs, which speaks of the greatness of Waheguru. As recorded in the Guru Granth Sahib, it contains the hymns of four different Gurus; Guru Nanak, Guru Amardas, Guru Ramdas and Guru Arjan Dev. Now part of the Rehiras Sahib the Benti Chaupai, attributed to Guru Gobind Singh was added to the Bani in the late 19th century. The addition was later ratified by the supreme Sikh religious body - the Shiromani Gurudwara Prabandhak Committee.

Each section of the prayer casts light on another aspect of God. It is recited after a hard days work when one is tired out. After returning home, washing up, and changing into more comfortable indoor clothing the family gathers together to recite this Bani. It adds energy to both the body and the mind allowing one to conclude their day, giving thanks to the Almighty for the completion of another successful day.

The verse speaks of the greatness of Waheguru and the ways in which ones actions assists one in attaining spiritual enlightenment, liberating one's mind and soul. This Bani assists a person when they are physically weak, financially weak or concerned with other material and earthly matters (sickness, physical weakness, lack of money or property) the mundane things of life that sometimes leaves us all feeling hopeless, unsuccessful or worthless. It elevates your mental outlook, leaving you with a fresh and positive view of things, adding energy to one's being, in both ones working and home life as well.

Components of this Bani