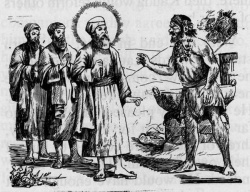 'Kauda the cannibal' has his eyes on Guru Nanak & his party

Kauda Bheel (also Known as Kauda Rakshish, Kauda Bheel) was once a cannibal, who became a Sikh after an encounter with Guru Nanak that changed his life. Guru Ji, during his Southern journeys, often crossed forests, baren lands and mountains, which resulted in his entering the area of the Bheel people. His now famous encounter with Kauda was (Acc. to Prof. Sahib Singh) near Kudapa, which is today a village about 70 km from Vijayawada in the Andhra Pardesh section of India.

Kauda belonged to the Bheel (a non Aryan, Dravidian tribe). tribe which had been driven from fertile land into jungles and barren land, in order to filling their stomachs the Bheels were known to eat human flesh. If they found some aryan coming they used to kill them. Area from Orrisa to Rameshwaram is called Dravirh and Bheel is a word for BOW in dravirhian language. (Kauda, like others of his tribe, hid in the forests of Kudapa and ambushed travellers who passed through their areas, robbed them and then ate them, as many had become Cannibals. They usually listed as Dravidic and referred to as Shudras. They inhabit the Vindhya, Satpura, and Satmala Hills. Today they live in Gujarat, Maharashtra, Karnataka and Rajasthan.

Painters depict Kauda Bheel as a Demon of Hindu Mythology with Big teeth, horns on head and very shabby look. He looked like common people as we are. So in forests their food habits also changed To feed their hungry belly, they started eating animals and humans too. So Kauda also was one of Cannibal. Many Historians support that he was head of Bheel tribe of that region.

There are many versions of the meeting of Guru Nanak and Kauda:

When he rested close to the out-skirts of a small town, he heard something very distressing and painful. The local people who had gathered to listen to the Kirtan in the evening told Guru ji that there lived a tribe in the jungle of man-eaters. The tribe used to capture anyone who ventured into the forest. The people lived in constant fear from this tribe of cannibals. Many children and adults who had gone into the forest to collect fire-wood had never returned and were feared dead. The local expressed to Guru ji their concern that the cannibals had eaten their friends and relations who had not returned from the forest.

He got ready to go. His two companions readily agreed to go with him. But the people said, "Guru ji, please don’t go, Sir. They will kill you and eat your flesh." The Guru replied, "No, I must do my duty. I must make them give up their cruel way of life. I want to make them live like good God-fearing people. I have no fear. God is always with me. He will help me in this work. It is His work. He will save me from the man-eaters. Have no fear. Please pray to God for my success. My success will bring joy to your people. They need to be taught a new and better way of life and be shown that they are doing wrong."

Accordingly, the Guru, along with his two companions, started towards the jungle. Guru ji had been told that the chief of the man-eaters was named Kauda. He had also learnt where that chief man-eater lived. He decided to meet Kauda directly and try and reform him. If he succeeded then, Guru ji knew that Kauda would then reform others of his tribe. With this end in mind, the Guru started towards Kauda’s hut. Soon, he and his two companions were quite near it.

Kauda saw three men coming. He was highly pleased and had a big smile on his face. He used to go far to catch men for food. That day, three of them were coming to him of their own free will. That was lucky, indeed. He would have enough meat for many days for him and his family.

He had a large, deep, cauldron full of oil. He lit fire under it, in order to make the oil boil. The three men had come very near. He felt the oil. It was as cool as before. The fire had lost the power to heat the oil. He could not understand what had happened to the fire. He decided to roast one of the three on the fire direct. He would keep the other two safely bound. He would eat them later. Guru ji was, then, almost at Kauda's hut. The Guru and his companions were then just very near. The Guru was in front. Kauda caught Guru ji in his arms.

Guru Nanak smiled and said, "Sat Kartar, Sat Kartar". Kauda was puzzled and a little confused. He had caught and eaten many men before. None of them had behaved in this manner. He threw Guru ji into the fire. He was hoping that the fire would kill Guru ji and roast him. But Guru ji stood up in the fire. He was smiling at Kauda. Guru ji companions were saying aloud, "Sat Kartar, Sat Kartar". Kauda began to tremble.

Guru ji stepped out of the fire.

Kauda was stunned. He was amazed that the fire had no power to hurt the Guru. He did not try to push Guru ji back into the fire. Kauda became totally confused and seemed to have lost his mind; his body just froze and lost the power to move.

Guru ji sat on the ground near the fire. He recited Gurbani. Kauda stood listening. His head was bowed. His hands were folded before him.

After a time, the Guru stopped singing the Gurbani. He looked at Kauda with a kind smile. Kauda fell at his feet. The Guru said, ‘Rise, brother Kauda ! Guru ji looked at him compassionately and graciously and said, "Kauda! You do not see what you do. You have gone blind. Why do you want to cast yourself in the burning fire of hell?"

Kauda, whose conscience was dead with heinous crimes, suddenly came to realization and was overwhelmed with repentance. Guru ji said, "Give up your cruel way of life. Take a vow not to harm anyone. Be kind and merciful. Help and serve others."

The very gracious and holy sight of the Divine Master made Kauda realize his guilt and he fell on the feet of the Master once again and prayed for mercy. The gracious Master blessed him with Naam. ("God's Name").

Guru ji told him, "Always remember God. Repeat His name. Earn your bread with honest work. Share your earnings with others. Do all this yourself and teach others of your tribe to do the same."

Kauda promised to live and act as advised by the Guru. From a killer and eater of men he became a servant and teacher of men. He was a completely changed person and thereafter lived as a devout disciple of the Guru as a completely honest worshipper of God.

Kauda, in peoples talk, is most often referred to as 'Kauda the cannibal', but given the meeting with Guru Nanak and his conversion and his later live as a devout disciple of Guru Nanak, it would, perhaps, be better to refer to him as Kauda the Gursikh.