From SikhiWiki
(Redirected from Kamaljit Kaur)
Jump to navigationJump to search 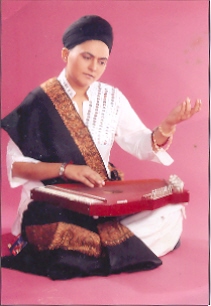 Kamaljit Kaur (born 1982) in Dehradun, UP is a Ragi (singer) ofGurbani and Kirtan (Sikh devotional music) who has performed around the world. When she is not touring she makes her home in Amritsar, Punjab. She completed her MA in Gurmat Sangeet, winning the prestigous Gold Medal. She has an "incredible" singing voice. The 26 year old Kamaljit's husband is Prof. Gurdev Singh, is far more modest about her musical abilities, insisting she is nowhere near as good as her famous father Bhai Jasbir Singh who had begun teaching her Kirtan as a child.

Her family moved from Dehradun to Punjab when Kamal was two, making their home in Gurdaspur. During her childhood, she played kirtan with her father in Sikh temples and at Sikh religious ceremonies. When she was just four, She started to sing the Shabad of Gurbani. She attended Sri Guru Harkrishan Senior Secondary School in Gurdaspur for her basic education. As a child, she played with many different musical instruments. At school, she began to participate in competitions of at both the state and national levels.

After completing her education at Gurdaspur, Kamal attended BBKDAV College, Amritsar, graduating with a Bachelors degree in Music. She then attended Punjabi University, Patiala for her Masters degree in Gurmat Sangeet, where she studied Kirtan under Dr. Gurnam Singh. 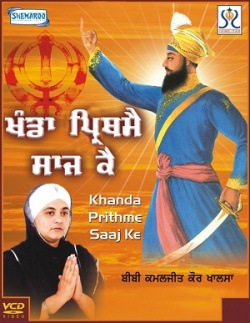 During the Holla Mohalla Smagam, Panthic organizations with patronage from Takht Sri Hazur Sahib, officially released a professionally recorded Sri Dasam Bani Kirtan Video CD along with an audio CD containing in-depth interviews of fourteen prominent Panthic scholars. Anti-Panthic heretics, including so-called missionaries, Kala-Afghanis, and their ex-communicated Spokesman and Darshan Mallee (ਦਰਸ਼ਨ ਮੱਲੀਝ) cohorts have routinely been parroting a myth that certain parts of Sri Dasam Granth were off-limits to Sikh women, or could not be read in public. Bibi Kamaljit Kaur, the daughter of well known Kirtani Bhai Jasbir Singh Ji Ghorrayvah, had recently recited verses from Chandi-di-Vaar, Sri Charitro-Pakhyian, and vaars of Bhai Gurdas Singh Ji at the 2010 Akhand Kirtan Smagam in Indore. Some of those verses were then professionally re-recored by a commercial studio. Media producer, Shamaroo Video, has distributed the professional studio recorded verses of Sri Dasam Bani by Bibi Kamaljit Kaur under the label “ਖੰਡਾ ਪ੝ਰਿਥਮੈ ਸਾਜ ਕੈ” - "Khanda Prithma Saaj Ke". This video was formally released on March 1st, 2010 at Takht Sri Hazur Sahib in front of a large congregation. Takht Sri Hazur Sahib Jathedar Bhai Kulwant Singh Ji honored Shahbaaz Khalsa sewadars, including Bhai Kavneet Singh who briefed the sangat during the occasion about the purpose of the VCDs release.

Photo and info retrieved from "http://www.sikhiwiki.org/index.php/Kamaljit_Kaur"