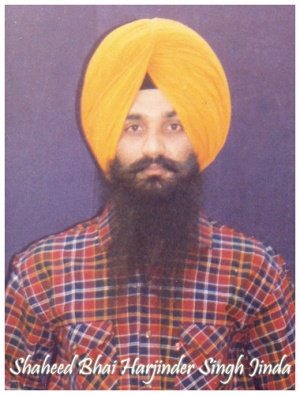 Harjinder Singh Jinda and Sukhdev Singh Sukha were the assassins of Arun Vaidya, the Chief General of the Indian army who was also the architect of Operation Bluestar. The pair were also responsible for three high-profile killings; Arjan Dass, Lalit Maken and Gen. Vaidya. They along with other members of the Khalistan Commando Force (including its chief General Labh Singh) were involved in the Indian History's biggest daylight bank robbery of the Punjab National Bank, Miller Gunj branch, Ludhiana in which more than Rs 5.70 crore (58 million rupees-$4.5 million) were looted, a part of which belonged to the Reserve Bank of India, India's central bank. [1][2][3].

This bank robbery was the biggest of other similar acts that Sikh militants used in an attempt to weaken the government (their idea being; to use public funds, stored in Indian banks, against Indian Security forces, as they highlighted the helplessness of the Government's forces, arrayed against them, to do anything about their efforts to gain a Sikh Homeland and avenge the attack on Sikhi's most venerated site. (And to avenge the deaths of not only those Gursikhs who courted Martyrdom that day, but also for the unknown numbers of innocent Pilgrims and visitors to the Harmandir Sahib who were murdered during and after the attack.) 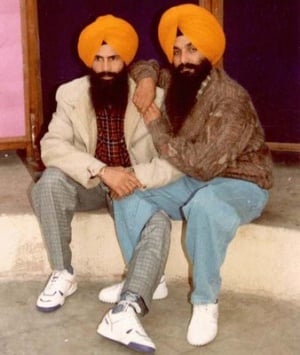 He was in BA part II when the 1984 attack Operation Bluestar occurred. He left his studies and joined the Khalistan movement afterwards.

Harjinder Singh alias Jinda and Sukhdev Singh alias Sukha, along with Ranjit Singh Gill, gunned down Congress(I) Member of Parliament Lalit Maken on July 31, 1985, when he was moving towards his car parked across the road from his house in Kirti Nagar, New Delhi. The three assailants continued firing even as Maken ran towards his house for cover. Maken's wife Geetanjali and a visitor, Balkishan, were also caught in the firing. The assailants escaped on their scooters.

Lalit Maken was considered to be involved in the killings of innocent Sikhs during the1984 Massacre of Sikhs. A 31-page booklet titled 'Who Are The Guilty', People's Union for Civil Liberties (PUCL) listed 227 people who had led the mobs, which killed up to 3,000 Sikhs over three days. Lalit Maken's name was third on the list [20].

A press report has indicated that someone named Bakshish Singh was also involved alongwith Jinda in this assasination.[21] Ranjit Singh "Gill" was arrested by Interpol in New Jersey, USA on May 14 1987, a federal magistrate approved his extradition on February 6, 1988[22] and he was deported back to india in February 2000 after lengthy legal cases and was sentenced to life imprisonment on February 24 2003. Finally his life sentence was commuted on May 20 2009.[23].

General Arun Vadiya was the Chief of the Indian Army who ordered the attack on the holiest of the holy Sikh shrines at Amritsar and elsewhere in Punjab during Operation Bluestar. He had moved to Pune after his retirement from the army.

On August 10, 1986 General Arun Vaidya, the architect of Operation Bluestar was shot to death by Jinda and Sukha while he was driving his car home from the market.[24] According to the police, the assailants pulled up next to his car on motor scooters and fired eight or nine shots into the car.[25] Vaidya reportedly died instantly of head and neck wounds. His wife, who was also in the car, was wounded by four bullets in her back and thighs.[26] According to Indian intelligence sources, Vaidya had been the number four assassination target on lists by Sikh militants and he was one of several people killed in retaliation for Operation Blue Star.[27][28] Following the assassination, the Khalistan Commando Force issued a statement declaring that Vaidya had been killed in retaliation for the Golden Temple operation.[27]

Congress (I) leader Arjun Dass was assassinated on Sept 5 1985[29][30] by Jinda[31], Sukha[32] and one other Sikh because of his involvement in 1984 Anti-Sikh riots. Arjan Dass's name appeared in various affidavits submitted by innocent Sikh victims to Nanavati Commission which was headed by Justice G.T. Nanavati, retired Judge of the Supreme Court of India.[33] He was also identified among organisers of the carnage.[34][35] Arjun Dass was a close friend of Prime Minister of India Rajiv Gandhi.[36]

On Feb 13th 1987, Mr. Jinda along with other members of the Khalistan Commando Force, including its chief general Labh Singh, participated in the biggest bank robbery of Indian history and robbed Rs. 5.70 crore (equivalent to $4.5 million) from Punjab National Bank, Miller Gunj branch, Ludhiana.[37] Part of the stolen funds belonged to the Reserve Bank of India, India's central bank.[38][39] A story in the Chicago Sun Times reported that 12 to 15 Sikh militants dressed as policemen and armed with submachine guns and rifles escaped with nearly $4.5 million in the biggest bank robbery in Indian history. Indian Police officials described it as 'a neat and clean operation' where no one was injured.

It was documented as “Biggest Bank Robbery” under “Curiosities and wonders” in Limca Book of Records[40]. Other Khalistan Commando Force members who participated with Jinda in this event were Mathra Singh[41], Paramjit Singh Panjwar [42], Satnam Singh Bawa[43], Gurnam Singh Bundala[44] Sukhdev Singh Sukha, Daljit Singh Bittu[45][46][47], Gursharan Singh Gamma[48][49][50] and Pritpal Singh[51] etc. It enabled his organization Khalistan Commando Force to buy sophisticated weapons[52] like AK-47 Rifles[53]In regards to this bank robbery, Los Angeles Times has mentioned that bank robberies have been a major means of financing the Sikh militants' campaign for a separate state of Khalistan.

On September 17, 1986, Mr Sukha got into an accident with a truck in Pimpri, Pune and was arrested. He was riding the same black motorcycle which was used at the time of assassination of General Vaidya. Mr. Jinda was arrested at Gurdwara Majnoo Daa Tilla, Delhi in March, 1987. He was shot in the legs at the time of his arrest. During their court trial, despite admitting to the killing, they pled not-guilty, justifying their actions by saying that Vaidya was "guilty of a serious crime, the punishment for which could only be death".[28] They were awarded death sentences at 2:05 pm on October 21, 1989. They welcomed their death sentences with Sikh religious slogans of Bole So Nihal and their political slogans of Khalistan Zindabad.

Though Jinda and Sukha did not put any legal defense and also did not challenge their death sentence in the superior court, several Sikhs made pleas to Supreme Court of India to stay execution of Jinda and Sukha, but court declined it on Oct 9, 1992[54] and they were executed early on the same day early in the morning. The Independent World mentioned “While being led from their cell to the gallows set up in the Yerawada gaol yard, the two convicted killers shouted slogans for Sikh independence in the Punjab”[55]. They were hung together at 4 am in the Yerwada Jail at Pune; Their lifeless bodies were left hanging for 30 minutes. Extraordinary security was deployed at the jail and in the periphery of Pune to oppose any possible Sikh militant attack. Security was also tightened all over Northern India[56]. For the execution, 4 Deputy Police Commissioners, 10 assistant Police Commissioners, 14 inspectors, 145 sub-inspectors and 1275 officers had been assigned. Their dead bodies were cremated on the same day at 6:20 am near the Moola river.

The Independent World reported that, “…their hanging sparked off protests by students and shop-keepers in the Sikh-dominated state of Punjab” and “Security forces were put on alert in New Delhi, Pune, the southern city where the two assassins were hanged, and throughout the Punjab.”[57].

On the morning of their memorial service, hundreds of troops and police surrounded the Golden Temple. In the early morning hundreds of Sikhs were ordered to move out of the Golden Temple. Sikh leaders Simranjit Singh Mann, Prakash Singh Badal, Gurcharan Singh Tohra and 300 others were arrested in the statewide arrests. Some people were baton charged when they tried to enter this religious place.

Approximately 300 Sikhs openly resisted the police clampdown and held the 30 minute memorial service inside the complex while chanting slogans hailing the assassins and in support of Sikh homeland Khalistan. Jinda and Sukha’s fathers were presented with gold medals by Golden Temple priest. Police seize of the temple was lifted 3 hours after the memorial service[58][59].

In October 1999, his death anniversary was celebrated in his village Gadli, district Amritsar, where chief of Akal Takhat Amritsar, Giani Puran Singh declared Jinda a national martyr while justifying his action of killing general Vaidya. Some Akali leaders stayed away from this function.[60]

On October 9, 2000, representatives of all major Sikh bodies, including ruling Shiromani Akali Dal, the SHSAD, the SGPC, the Damdami Taksal, AISSF and the Dal Khalsa attended the eighth death anniversary of Harjinder Singh Jinda and Sukhdev Singh Sukha. To honour Jinda and Sukha, Giani Joginder Singh Vedanti, Head of Akal Takht (Supreme Sikh temporal seat), performed the ‘ardas’ (a Sikh religious rite). Both Sukha and Jinda were declared as “great martyrs’ of the Sikh religion during this event.[61]

On October 9, 2002, per The Tribune, on Jinda's death anniversary, "Tributes were paid to the assassins of General Vaidya — Jinda and Sukhdev Singh Sukha" and Jinda's mother was honoured by Giani Joginder Singh Vedanti, chief of Akal Takhat[62].

In October 2005, his death anniversary was celebrated in his native village of Gadli by various Sikh organization including Dal Khalsa, Damdami Taksal, Akal Federation and Sikh Students Federation etc[63] and his family was again honoured by Dal Khalsa in Fateh Garh Sahib in Punjab, India[64].

On October 9, 2008, Shiromani Gurdwara Prabandhak Committee honoured kin of Jinda and Sukha in the Golden Temple complex, to mark their death anniversary. SGPC declared Jinda and Sukha ‘martyrs of Sikh community' and added that Jinda and Sukha took revenge of Operation Bluestar.[37]

Sukha and Jinda's letter to the President of India